Locally based Virginia Business Systems has acquired Data Technologies, also of Richmond, and plans to retain many of the 27-year-old DT’s staff. VBS supplies document products such as Konica Minolta, Xerox and Hewlett Packard.

The Frontier Project was named on the Outside Magazine Best Places to Work list for the second consecutive year.

Project Plant It, the environmental education program developed by Dominion Resources in 2007, was awarded a Gold Leaf Award by the Mid-Atlantic Chapter of the International Society of Arboriculture.

Compare.com was a silver recipient of the Fast Growing Company of the Year by the Best in Biz awards. The program is in its fifth year and had the highest submissions so far, with 600 entries.

Stephen Baril of Kaplan Voekler Cunningham & Frank PLC was chosen by the Virginia Smoke Free Association as its government relations representative and lobbyist for the upcoming General Assembly session.

Baril was also recently elected to the position of president of the board of directors for Virginia Lawyers Helping Lawyers. He will serve a two-year term.

The United Way has launched a new initiative called Thrive aimed at helping residents in the Richmond area become financially stable. The group kicked off the initiative by issuing $160,000 in grants to 11 organizations.

FeedMore’s Meals on Wheels joined with Kroger Mid-Atlantic to cover the cost of Thanksgiving meals for clients and award Kroger gift cards to all Meals on Wheels volunteer drivers.

The Richmond Center for Workforce Innovation partnered with Capital One to create a Bike Distribution Program for participants who complete a workforce training program, allowing them transportation in the Richmond area. 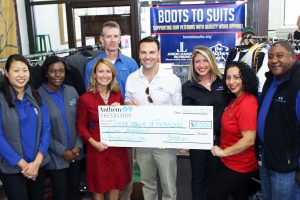 The Junior League of Richmond celebrated the first anniversary of its Boots to Suits program, a voucher program for men and women through The Clothes Rack retail store to assist veterans transitioning from military life into a new career. Anthem just became the first corporate sponsor for the program, providing two vans of clothing and $5,000.

The Christmas Mother Fund awarded $10,000 to the downtown YMCA, which will go toward the organization’s Christmas Connections program. The initiative gives gifts to children in the YMCA’s After-School Child Care programs at Woodville Elementary School and Oak Grove Elementary School. 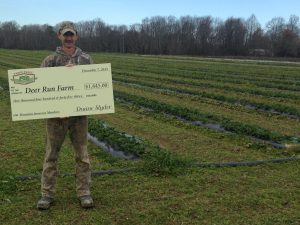 Family Lifeline will continue its annual “Baskets of Cheer” program this year, providing donations and social interaction to more than 65 local seniors in an attempt to relieve the stress experienced by isolated seniors, who are more vulnerable during the holidays.

Farm Table has raised $1,445 for one of its partners, Deer Run Farm in Hanover, which suffered winter damage to its greenhouses last year. With the donation, the farm will be able to repair its greenhouse to protect its crops, which will be featured in Farm Table delivered boxes year-round.

Mustaches for Kids has raised $150,000 for Richmond-based charities benefiting kids this year, including Ask, SCAN, Children’s Hospital, FeedMore, and Founders. The organization has been raising money for 13 years.

VCU Medical Center was re-verified as a Level 1 trauma center. The facility has held the designation since 1981, longer than any other trauma center in the state.

Johnston-Willis Hospital was named a center of excellence in robotic surgery by the Surgical Review Corp., the only hospital on the East Coast and one of three in the country to earn the designation.

HCA Virginia’s Johnston-Willis Hospital and John Randolph Medical Center were named to the annual list of Top Hospitals by the Leapfrog Group. 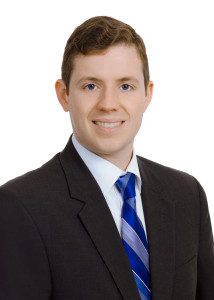 Andrew Ryan of Commonwealth Partnerships was named as one of the top three public relations professionals in the country under 40 by Bulldog Reporter.

The Steward School has started a new merit-based grant program for its upper school, made possible by a donation from a current Steward family. The grants will provide $10,000 in funds for students in grades 9-11 and are based on a student’s character as well as academics, accomplishments and financial need.

The Richmond Flying Squirrels franchise was recognized with the 2015 Bob Freitas “Organization of the Year” award for its contribution to minor league baseball and the Richmond community.

The Richmond Association of Realtors held an annual event in early December to celebrate the recipients of the 2015 RAR awards, which include: Scott Ruth, Jamie Jo Younger, Shannon Warren, Cathy Englishman, Betsy DiNardo and Dawn Bradley.

Jeanie Bode of First Capital Bank was inducted into the Home Building Association of Richmond’s Hall of Fame.