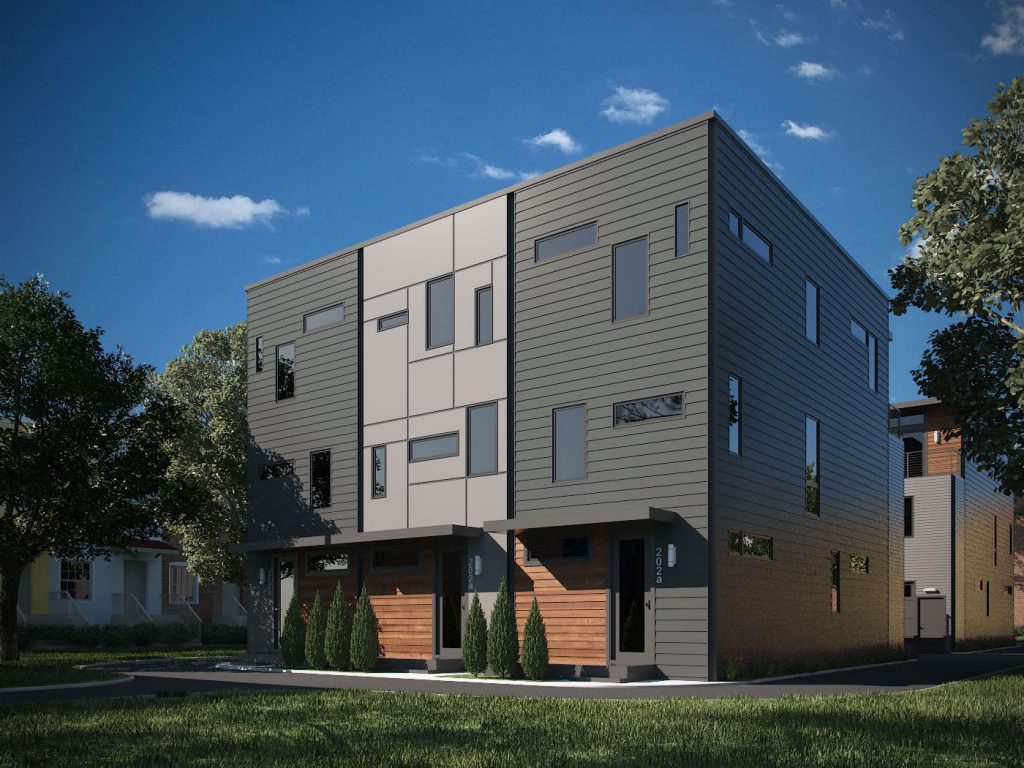 Modern new town houses are set to be built near the Fan and Carytown. Rendering courtesy of Patrick Sullivan.

The trio has teamed up to construct six new townhomes just outside of the Fan and Carytown on a one-eighth-acre plot bordered by alleys along South Robinson Street.

The idea came to Sullivan, a broker with One South Realty Group, and White of architecture firm 510_Architects. They thought Richmond could take advantage of its alleys, which crisscross through neighborhoods like the Fan, and utilize that space for some modern architecture.

The idea of tucking homes in between alleys, or into their own little coves, as Sullivan describes it, is frequently seen in other parts of the world, particularly in Europe or Asia, and even in cities like Seattle and Denver.

“All the cities that Richmond wants to be,” Sullivan said. “But we just turn our backs on (alleys).” 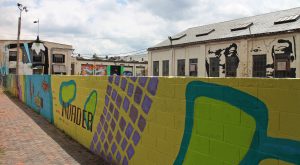 A former GRTC bus property adjacent to the A2 site is slated for redevelopment. Photo by Michael Thompson.

Sullivan and White eventually approached Meyer of Dallan Development, who was immediately on board. The undertaking will be the company’s first development, having restricted most of its activities to investments up until this point.

The project, dubbed A2, will consist of six townhomes located at 202 Rear S. Robinson St. behind the Cask Cafe and Market on a parcel bounded by four alleys. It won’t have any street frontage.

“The population is becoming younger and more progressive,” Meyer said. “They want to get away from the old style of buildings.”

That’s where White’s firm comes in. It specializes in modern designs, and Sullivan said he frequently has clients looking for homes that are distinct from the traditional architecture usually found in and around the Fan.

“We have people coming in and asking, ‘Where is the modern architecture?’” Sullivan said.

The townhomes are set to be three-story buildings with a garage and an additional bedroom, office or media room on the first floor; two bedrooms on the second floor; and an open living space and kitchen on the third floor. Each home will also have its own dumbwaiter connecting the floors to easily move items between the garage and the rest of the house.

The six homes will be priced under $400,000. Construction should start this spring and the group is aiming to deliver the houses in late 2016.

The area around the homes is set to be revamped, with the recent buyers of the former GRTC bus depot planning a large mixed-use project nearby that will likely include commercial space and apartments.

Dallan’s construction arm, Dallan Construction, is the general contractor for the A2 project. Meyer did not share how much the development will cost. He is financing with Monarch Bank.

Dallan Development purchased the parcel behind the Cask last March for $105,000. Sullivan said that particular parcel is unique, as most similar properties are split up between multiple owners.

Neighbors, Meyer said, have been supportive of the plan so far, as has the city – the group secured approval from both the Planning Commission and City Council.

Part of the group’s agreement with the city will be to improve the surrounding alleys, and to repave at least one piece, to make it safer to navigate.

“My goal with anything I develop is that it needs to be something that I will be proud of and something that takes into account the people around me,” Meyer said. “It’s our first development and we want to do it right.”

You can learn more about the project at A2rva.com

Great idea, I wish them well, but I hope the facades don’t end up being that ugly. Modernism can look good too.

It’s very Dutch modernism in its look. I’ve seen a lot of this style in The Hague area. I’m excited for Danny Meyer who does exceptional work in every endeavor and wish them all good luck.

I am so disappointed the Planning Commission approved this. Its horrible for the existing homeowners. How can they get fire service or utilities in the alley without road frontage? Another example of the City Planning commission failing on their job to protect the citizens and selling out to developers.

This is great. I’m a 9-year neighbor across the street from this new project and I’m excited to see a blighted alley turned into homes. It’s something every great city has, kudos to Richmond for stepping into 2016 with projects like this and others.

People complained that the Fan was built too dense in the 1890’s as it swelled around the former town of Sydney, Let them complain that this is too dense now. Get on board or don’t, won’t change the inevitable. As someone directly affected by proximity, I like it.

Disappointed as well … the alleys are an integral part of the appeal of the Fan to many people. They’re not only some modicum of open space, but they are also simply a fun way to get around the Fan walking and add character. It’s of course subjective, but what’s proposed adds no character. If anything it dilutes it by just filling in holes and spaces. I’ve yet to meet anyone, living here or visiting, inquire about the lack of modern architecture. In my experience, that’s not what they are looking for. Things change; you’re not going to stop it.… Read more »

I as well am very welcoming to this. 7 years as a homeowner in this area,(a block away) I think it’s a nice approach that will be very welcoming to this area. With healthy factors such as parking built into the property and a nice new aesthetically appeal to the neighborhood it will be a great add. I am excited to see what comes along with this as the year continues.

I was approached and fled a robbery in front of this “fun way to get around”, and my car was stolen from in front of the building that now houses The Cask before the restaurant was there. Four years ago I was woken up with rapid gunfire in the alley. I’m not sure what you think it looks like back there. Plus, it’s a giant empty space, most of the fan and museum district alleys have garages in this type of setting, this one will have houses. I would recommend you walk through the alley sometime, perhaps at night. The… Read more »

Points taken. I will say though that there was a robbery and shooting on the corner of where I work. I do walk at night, morning, middle of the morning. My car may not have been stolen, but my bike was: in front of the police, in front of my office. I’ve heard gunfire near my home and my work … etc, etc … sad to say. That said, I’m not coming at this or formulating an opinion out of thin air or idealism … or fear. I may not fear ‘density,’ but I’m not an advocate of it. For… Read more »

In the interest of transparency, when I relocated my business to Richmond some time ago, I bought into a ‘modern’ development. This is, of course, only one instance and does by default make my opinion highly suspect I’m sure to many. But from my experience, my reasoning and choices then are now highly suspect to me. With hindsight, there are other choices and options I wish I had pursued. As I mentioned, things change. I think we all probably agree that we hope that any change is always for the better. Common goals are great; how we go about getting… Read more »

One of the access alleys runs behind my house, which is on the corner. About 10 years ago, a truck struck and damaged my garage, which borders the alley. A few years prior to that, a car took out my neighbor’s fence. The police never solved either hit-an-run case. None of the alleys which will be used are sufficiently large enough to handle the potential traffic. One must also take into account the fact that they’re usually partially blocked by super cans and discarded furniture. Paving them will make absolutely no difference. I have lived in this neighborhood for 22… Read more »

It’s really interesting to hear what the locals think about this project. Some people like the design, while others hate it. Either way, neighborhoods always seem to change. The dumbwaiter is a very neat feature, though. Something I’d like to see more of in the future with new construction.

my concern is the loss of courtyard space for all the houses around that space. Thoughtful urban spaces include open spaces. Crowding buildings into former open space is like the tenements that led to the creating of planning and social work as professions, to give healthy livable spaces to all. We successfully fought such a project on my city block and I’m concerned this approval is setting a dangerous precedent for the quality of life in Richmond’s urban neighborhoods.

Prior to this development plan, the previous owner was planning to put corrugated metal storage sheds that would have covered the lot. This was by right / they did not need any special approval from the city and there would have been no neighbor input. When people would have accessed these units they most likely would have parked in front of these rental garages. Similar to what happens all over the fan and the museum district. Would this have been a better use for the city / residents? It is a privately owned lot… it would never have been a… Read more »

I would have preferred the storage sheds. There is a big difference between building garages and “tucking in” 6 families in a space which fire trucks and emergency vehicles may find difficult to navigate. As for the neighborhood input session, I didn’t waste my time participating. Parker Agelasto is only interested in hearing from the quasi “neighborhood” groups that the restaurants and developers set up to represent themselves.

If these were built with non-combustible construction materials, fire would not be much of an issue…

A few years ago they demolished the row houses on South Davis at Grayland to make way for the Virginia Power parking lot. But they didn’t stop there. To add insult to injury they got permission to remove the public sidewalk on that side of the street and replace it with shrubs and trees. This neighborhood has a long history of such abuse. As long as we have weak, ineffective zoning boards and politicians that serve as rubber stamps for big money, these abuses will continue. This is just the beginning. Vinyl houses will soon find their way to the… Read more »

OMG it looks like a high rise trailer park we need to organize and fight this stuff!

I really like the idea of utilizing the alley – I will never complain about added density. And additional new housing supply in that area should always be welcome. But that design is hideous. These architects should understand the area of town in which the buildings will be located, these don’t fit in at all. They are an eyesore.

More higher density housing with basic utilitarian form was the mantra when the public housing projects were being built years ago. How can anyone be proud of this monstrosity?