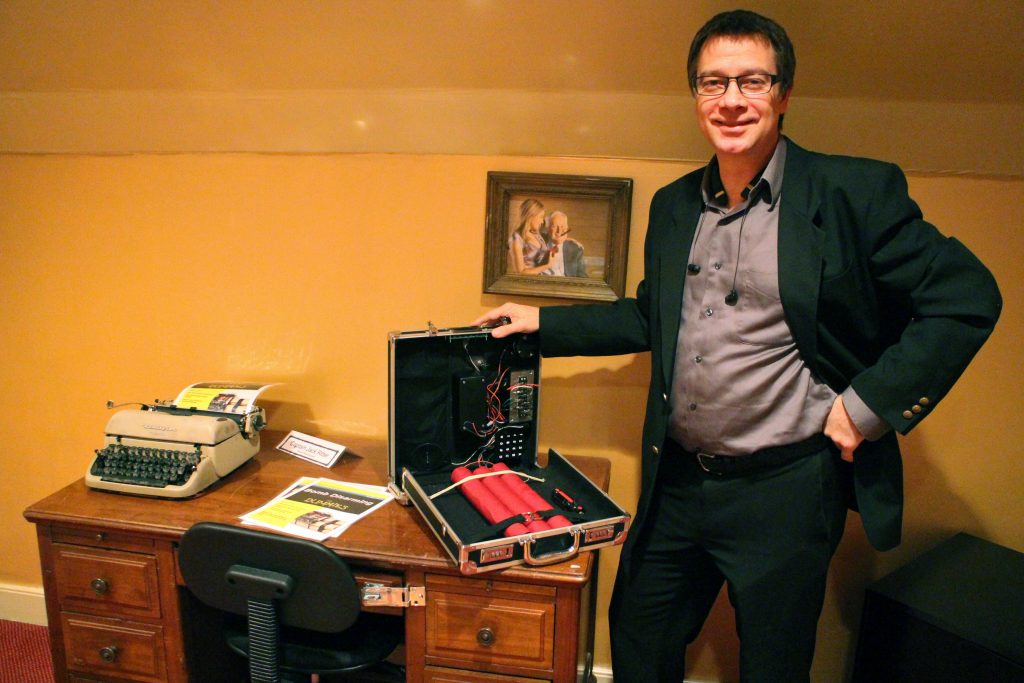 Larry Volz recently opened an escape room venture, in which one puzzle requires players to defuse a bomb. Photos by Michael Thompson.

As a hypnotist, Larry Volz uses his craft to help people try to quit smoking or lose weight.

As a magician, he performs his slight-of-hand act at conferences and college campuses.

With his newest vocation, set in a small storefront in Midlothian, Volz locks groups of people in a room and asks them to diffuse bombs or pull off an art heist before they leave. 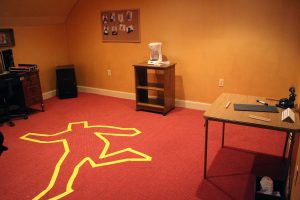 Groups have one hour to solve the puzzles in their room.

The rooms can handle teams of up to 10 people who have one hour to achieve the room’s goal. Current room offerings include “Heist,” in which players must overcome a laser obstacle course to steal a piece of art; “Boom,” where players have to diffuse a fake bomb; and “Patient Zero,” in which participants try to avert a zombie apocalypse.

Volz, 50, is a magician and hypnotist who does both therapy and entertainment. He has been doing hypnosis for about 15 years. His practice, Richmond Hypnosis Center, keeps an office at 4100 Brook Road in Bellevue. He said he does mostly magic for larger audiences but incorporates hypnosis for smaller crowds.

His shift into the escape room business came after he tried the experience for the first time earlier this year in New York.

“I became obsessed with it,” he said.

By October and November he had set up temporary escape rooms at the Firehouse Theatre on West Broad Street and eventually moved into the Midlothian space full-time.

“In six months I went from doing my first escape room to having a business that’s thriving.”

He said his training in hypnosis and magic plays a role in designing the escape room puzzles to challenge and entertain people.

“The concept of inspiring wonder in people is what I took from it,” he said. “That’s kind of been my guiding light.”

It costs $25 per person to do one of the rooms at Real Escape Room Richmond. Volz said the business has mostly attracted consumers looking for something fun to do. He has also gotten visits from groups looking to do team building, a segment Volz would like to grow.

“It’s really the most natural team building thing in the world,” Volz said.

“We’re friendly competitors,” Volz said of Escape Room RVA. “It’s kind of like when you look at a movie director. There’s a slightly different aesthetic.”

Volz described Real Escape Room Richmond as having ties to interactive theatre, and to that end he wants to take his show on the road and host others. He plans to do a temporary location in Virginia Beach in February.

“We’re going to have a home base here but do a kind of touring model,” he said.