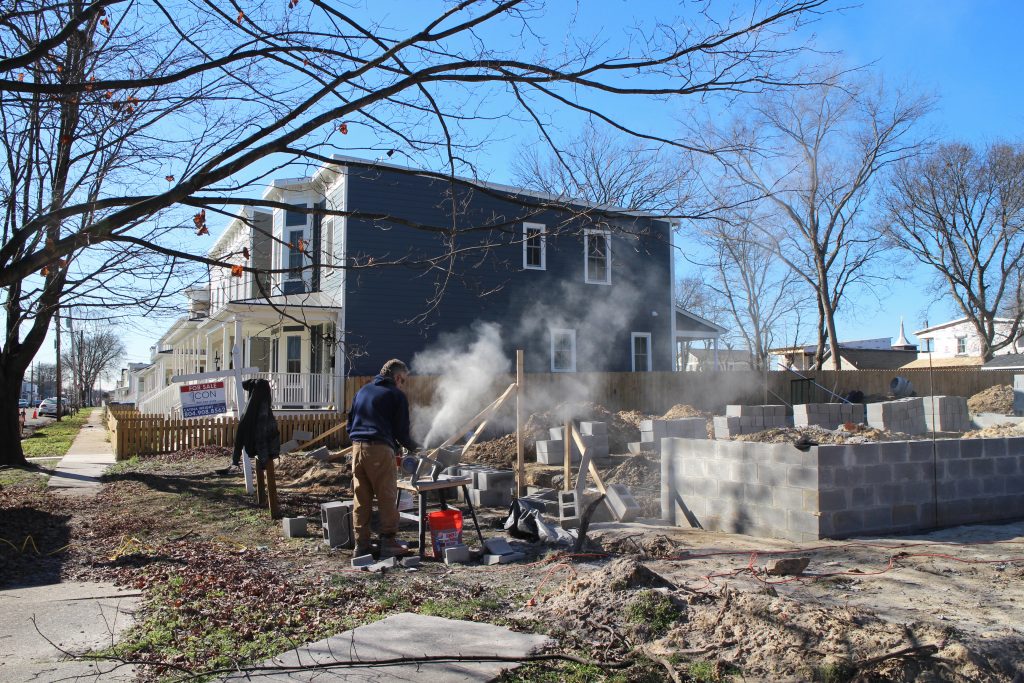 Crews work on the foundation of a new home on North 26th Street between S and T streets in Church Hill. Photos by Jonathan Spiers.

As developers add some higher-priced options to the housing stock available in North Church Hill, an effort remains underway to ensure that lower-income residents can remain in the neighborhood.

A coalition of city agencies and nonprofits is wrapping up one project and moving forward with others that are adding dozens of new homes and renovating existing ones in North Church Hill and other Richmond neighborhoods.

The group, which includes the Richmond Redevelopment and Housing Authority, Better Housing Coalition and Project:Homes, among others, is nearing completion on the Church Hill Model Block project. It has seen the construction of 38 homes in and around a full block, bordered by S and T streets and North 26th and 27th streets. 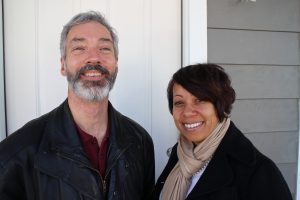 About $180,000 of that money would fund another five homes for the Church Hill Model Block, to be built by Project:Homes at a total project cost of $2.28 million.

Catina Wright, who sells homes for Better Housing through Icon Realty Group, a Re/Max Commonwealth affiliate, said the homes ensure that a mix of incomes are represented in a neighborhood that has seen heightened interest from private developers.

She noted higher-priced homes under construction in the area, including seven homes to be priced around $400,000 a few blocks away.

“We never really want to lose sight of mixed-income communities,” she said. “Without programs like this, your average buyers – median-income – wouldn’t be able to buy, especially in historic districts.”

David Herring, Better Housing’s director of single family development, said the projects also add value to stretches of older neighborhoods that may have been depressed by rundown homes or vacant lots.

“We go into areas that previously had little value in the private sector and we establish value,” Herring said.

Homes built are assessed for their sales price, which have ranged in North Church Hill from $165,000 to $170,000. That helps establish comparables for the rest of a neighborhood. The Church Hill Model Block homes, for example, fill lots that were vacant or replace older homes that were razed due to their condition. 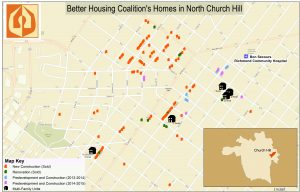 “It’s a win for everybody, even existing residents,” Herring said.

Better Housing works with Condor Construction and Development as its general contractor for its homes. Of the 38 homes that make up Church Hill Model Block, half are funded by Better Housing, the other half by Project:Homes.

Most homes in the block range in size from 1,500 to nearly 1,700 square feet. Models and floor plans vary, but most have three bedrooms and 2 ½ bathrooms.

Some models feature 9-foot ceilings and front porches, and Wright said facades are designed to fit in with the neighborhood and surrounding architecture.

Homes sold come with a 10-year tax abatement and down payment assistance that keep a buyer’s monthly payments at about $850 to $900 a month, Wright said. In North Church Hill, she said, buyers have included a ballerina with the Richmond Ballet, a nursing assistant, an assistant bank branch manager, an assistant manager for a restaurant and a Capital One employee.

In addition to Church Hill, Better Housing is also building homes in Barton Heights, where the RRHA is planning to demolish several homes as part of the CDBG projects for the current fiscal year.

Last week, the city submitted a request for $1.9 million in CDBG funds for projects and programs ranging from new home construction in Carver and Church Hill to a new park and a conversion of a former school into apartments in North Jackson Ward.

The funds are part of the city’s annual allocations from HUD – currently $4.1 million in CDBG funds and about $1 million in HOME funds – for projects that assist low- to moderate-income households. Such households are defined as ranging from 30 to 80 percent of the area’s median income, currently set at $74,200.

Projects to be funded by last week’s request include:
• Carver: New home construction in the 1100 and 1200 blocks of Catherine and Leigh streets.
• Carver: New home construction and rehab of existing homes in 2000 block of West Moore Street.
• Church Hill: New home construction in the 1300 block of North 26th and 27th streets.
• North Jackson Ward: Construction of a passive park and community garden on vacant land at 11 E. Charity St.
• North Jackson Ward: Rehab of former Baker School at 100 W. Baker St. to convert it to multifamily residential use.
• Southern Barton Heights: Demolition of various properties, including four each on West Falls Street and Rose Avenue.