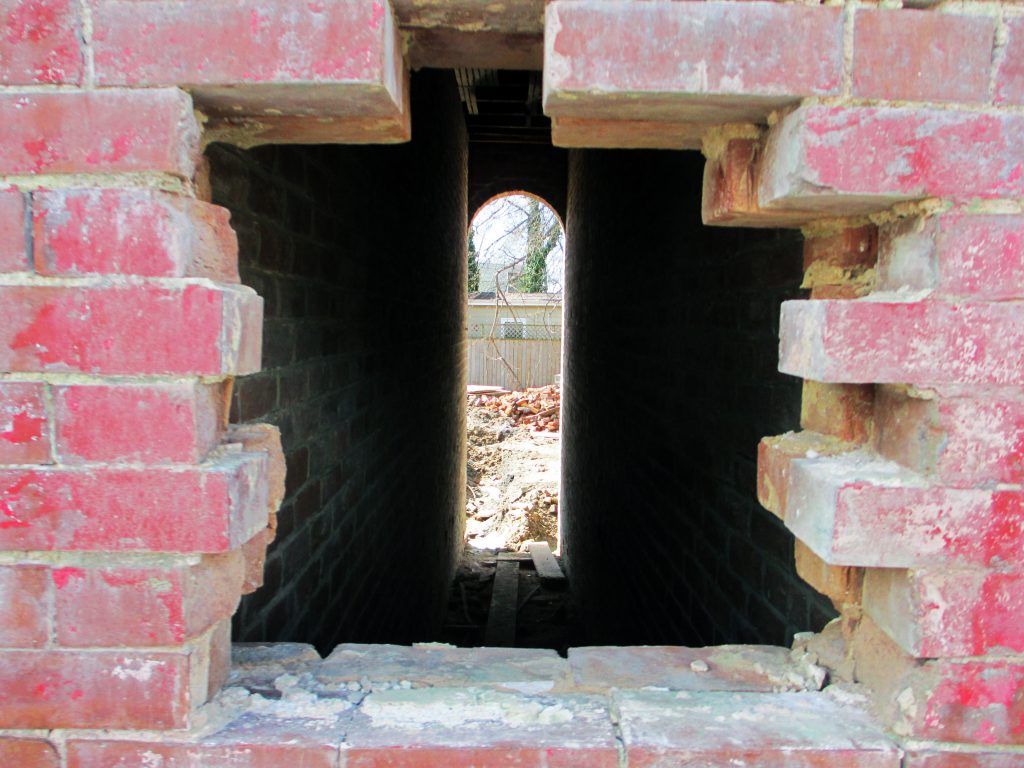 A restoration project on O Street in Church Hill uncovered this pedestrian tunnel in the middle of the block. The developer said the architectural feature was popular with 19th century rowhouses in northern Virginia and Maryland. Photos by Jonathan Spiers.

The block of seven attached rowhouses and a former general store at 2525 O St. no longer bears the multicolored facades and dilapidated features that made it catch the eye of developer Deanna Lewis two years ago.

Now, since construction began last summer, the block of brick buildings is beginning to resemble what it looked like in 1875, when it was constructed.

An addition is taking shape at the rear of the old corner store space, which is being converted into a 2,400-square-foot home and is already under contract.

And groundwork is starting on additions to the block’s seven smaller rowhouse units, which will each span 1,500 square feet of space once extended by about 33 feet each.

The general store addition along 26th Street is also extending the building’s granite foundation – a notable hallmark of the original builder, English immigrant James Netherwood. Netherwood’s work with granite in the 19th century can be seen in Richmond landmarks like the Robert E. Lee monument on Monument Avenue, the Confederate Soldiers and Sailors monument at the top of Libby Hill and the Old City Hall building – the largest granite building in Richmond.

The project will restore seven rowhouses and a former store and will add on a new home. Rendering courtesy of Denworth Restoration Associates.

Lewis, the developer and builder, said Netherwood built the stretch of Church Hill homes for his workers, according to research she’s conducted on the property. And her property is near another Netherwood rowhouse project along the 26th block of East Broad Street that Lewis said is known as the “Mann-Netherwood block” for the collaboration between Netherwood and John Mann.

Lewis has named her project at O and 26th streets “Netherwoods.” She said the granite foundation of the building goes 10 feet deep into the ground.

“It’s a good thing he had a granite foundry,” she said.

Lewis bought the seven parcels, totaling 0.2 acres, over the course of 10 months through her development company, Deworth Restoration Associates LLC. City records show she paid a total of $159,000 to four different grantors, through multi-parcel sales, to acquire the whole block.

“All were vacant with the exception of one,” Lewis said, “and all were in different stages of decay. So the biggest part of the work was getting them shored up and safe so we can mold them.”

Included in those sales was an adjacent corner parcel at O and 25th streets. Lewis is eyeing an existing building on that parcel for a possible restaurant.

Lewis said she has financed the Netherwoods project on her own but is working with EVB bank on future financing. She said the project, once completed later this year, will be a $1.5 million investment.

The seven rowhouses, along with an additional new unit to be built at the end of the row, will be priced in the $275,000 range, with customizations available. Each will have three bedrooms and 2½ baths. 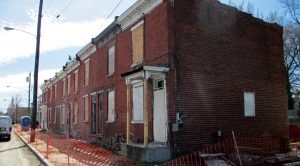 The developer has scraped off brightly colored paint off the brick structure.

The larger general store unit, which is already under contract, was priced at $325,000. The unit will feature three master suites and 3½ bathrooms, all historically restored, Lewis said.

The project has qualified for the city’s tax abatement program, which provides property owners with substantial savings on real estate taxes. Lewis also said the city is extending new sewer lines, gas lines and other utilities to the site.

Lewis is working with listing agent Jeanne Bridgforth of One South Realty Group. The pair have collaborated on Lewis’ other projects, including the Anthony Turner House at 2520 E. Franklin St. and a home at 711 N. 26th St., which was a runner-up in 2011 for the Better Housing Coalition’s Golden Hammer Award for residential renovation.

“I’m hoping I’m not runner-up again on this one,” Lewis joked.

She said she’s using old brick on the additions, as well as era-appropriate heart pine for the floors.

Lewis said she expects all the units to be completed and available by year’s end. While she looks forward to that, she said she’s also enjoyed looking back to the building’s history to help guide the project.

Lewis is giving a presentation on the project to the Historic Richmond Foundation’s Quoit Club Thursday night. The event will take place from 6 p.m. to 8 p.m. at the site, located at 2525 O St.

Deanna does great work! We are looking forward to this development in N. Church Hill.Nominations are now being accepted online through April 10th for the Better Housing Coalition’s Golden Hammer Awards. If you have a project completed in 2014 to nominate, please check out the categories and criteria and nominate it here: http://www.betterhousingcoalition.org/news-and-events/goldenhammer/