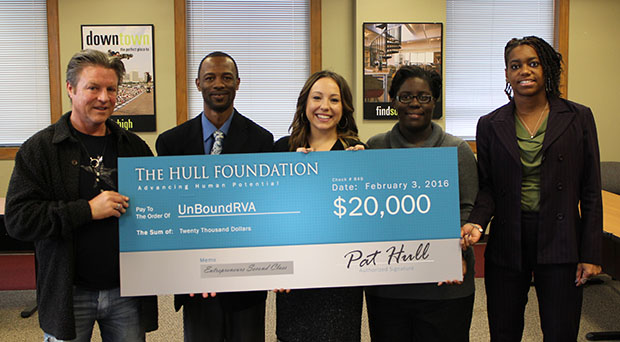 Fueled by a donation from an investor with Richmond ties, a young nonprofit is giving a boost to another set of local entrepreneurs.

UnBoundRVA is using a $20,000 donation from The Hull Foundation to help five Richmond low-income entrepreneurs looking to launch ventures of their own.

The nonprofit announced Wednesday it had received the donation from The Hull Foundation, a philanthropic entity established in 2009 by investor and Richmonder Patrick Hull. The foundation made a similar donation to UnBoundRVA in 2014.

Hull said he likes that UnBoundRVA is helping entrepreneurs who don’t have as much opportunities as others do.

“What I love about this program is it affects people looking up to you,” Hull said at an event celebrating UnBoundRVA. “You’re going to see this program flourish.” 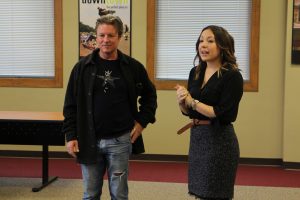 Hull and Mullens at Wednesday’s ceremony.

The entrepreneurs behind those ventures recently finished six months of leadership and business education with UnBoundRVA. Elite Mobile Detailing and Closets and Kids have incorporated, while 1010 Post Construction, Virtual Reality and Favour Cookie Company have yet to officially launch.

Richard Luck and Sarah Mullens launched UnBoundRVA in 2014 and partnered with a first group of five entrepreneurs last year. Of UnBoundRVA’s inaugural class of entrepreneurs, one wasn’t able to start a business, three are up and running, and one is in the works.

“We do literally everything, from backing a loan to attending legal meetings to helping get customers,” Mullens said.

The entrepreneurs come to UnBoundRVA through referrals from other area nonprofits. UnBoundRVA does not take any ownership of the businesses it helps.

Avian Mills, the entrepreneur behind Closets and Kids, was born and raised in Richmond. Currently studying child development while working as a teacher’s aide, Mills credits UnBoundRVA for helping her pursue her business goals.

“I feel like I have been given a second chance to be able to attack my vision of being a small business owner,” Mills said in a video produced by UnBoundRVA. “They are a vital part to the growth and success that I have already sustained so far.”