One of the city’s biggest private schools is continuing to spread out in Northside.

Veritas School last month purchased the grounds of the former Richmond Memorial Hospital at 1300 Westwood Ave. for $1.45 million, in a move that will add more than 7 acres and 15,000 square feet to its neighboring main campus.

The deal has been in the works since the summer, when Veritas had the land under contract. The seller was Oregon-based Stan-Corp Mortgage Investors.

The school’s purchase included the Laburnum House, as well as the Ginter Building and Palmyra Building, collectively comprising the Richmond Memorial Hospital, which ceased operation in 1998.

In total Veritas purchased 92,000 square feet, but Head of School Keith Nix said the plan is to demolish the Ginter and Palmyra buildings, leaving the 15,000-square-foot Laburnum House for the school to use. The space around the house, including the parking lot that sits on the property, will be converted to green space.

“We lack recreational green space, both during the normal school day and after school,” Nix said. “We were really behind this piece of property to get some green space and to secure our future footprint.

“Our biggest need as a growing K-12 school is athletic space.”

The Laburnum House property is directly across Lamont Street from the school’s main campus, which sits at Westwood Avenue and Brook Road.

Veritas, founded in 2000, moved to the Northside campus about two years ago from its original location at Crestwood Presbyterian Church. It has been slowly accumulating its buildings, buying some and leasing others from the neighboring Baptist Theological Seminary and Union Presbyterian Seminary. 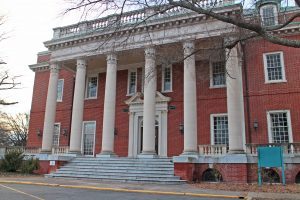 Laburnum House will be converted into event and meeting space and offices. Photo by Katie Demeria.

The school currently owns almost 4.5 acres and two buildings, Graves and Virginia halls, which comprise 50,000 square feet. It has lease-to-own contracts on two of the additional buildings, Lingle and Newbury halls, adding another 32,000 square feet.

The Laburnum House’s first floor will be used for meeting space and large events; its second floor will be non-academic administration, including the head of school’s office; and the plan for the third floor has not been finalized.

The historic home, constructed in 1908 for the family of Joseph Bryan, served as a residence until 1944. The PBS series “Mercy Street,” a civil war-era hospital drama, was filmed recently in the Laburnum House. Nix said Veritas is waiting for final word from PBS about whether it will continue to film in the building.

“We have communicated that we’re excited and hopeful that they do,” Nix said. “To the degree that Veritas can help play a role in ensuring a growing and thriving historic Ginter Park area, it’s an exciting proposition and privilege for us.”

It could be between two and seven years before Veritas is able to demolish the remnants of the Richmond Memorial Hospital. The Zacharias Ganey Health Institute has two years remaining on its lease in that part of the property, with an option to renew for five years after that. 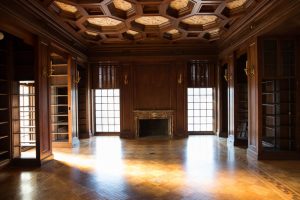 In the meantime, the school will continue trying to raise funds to implement its plans, and as soon as enough funding is secured it will convert the parking lot into green space.

With this latest chunk in hand, Nix said one of Veritas’ main priorities is to begin developing a lease-to-purchase deal with Union Presbyterian Seminary for the remaining empty building on Veritas’ main campus, Dubose Hall.

And it is also trying to expand its green space even further. The school hopes to purchase 19 acres of open space owned by Union, known as the Westwood Tract, which sits directly across Westwood Avenue.

Union has officially signed a deal with Bristol Development Group to construct a $50 million apartment complex on 15 acres of the Westwood Tract, which had previously been a 34-acre area available for neighborhood use.

“Our plans for it would be such a good fit for the neighbors,” Nix said. “Collectively, we want our school to matter to Richmond. We want this school as an institution to serve and be a blessing to the neighborhood and city.”

Veritas began 15 years ago with 25 students and has grown to 425. Its annual operating budget is $4 million, and tuition costs about $10,500 annually, with financial aid available to students.

The school is the sixth-largest private school in the Richmond area, according to a recent BizSense ranking.

Veritas has raised $5 million for the first phase of assembling its new campus and is in the process of raising an additional $5 million to accumulate the rest. It has secured a $1.25 million loan from Union Bank & Trust and has an ongoing capital campaign to raise additional funds.

The feedback that I have received from residents of the Northside community has been universally positive. They are relatively new to the neighborhood but have been collaborative and sharing in their plans for expansion. It was always been the plan for this area of Ginter Park to be occupied by an educational institution that is concerned about the strength of its neighborhood. I am happy to have such a partner in Veritas School and congratulate their board and administration for taking this long range approach. With neighbors like Veritas, I remain confident in the future of Ginter Park and Sherwood… Read more »