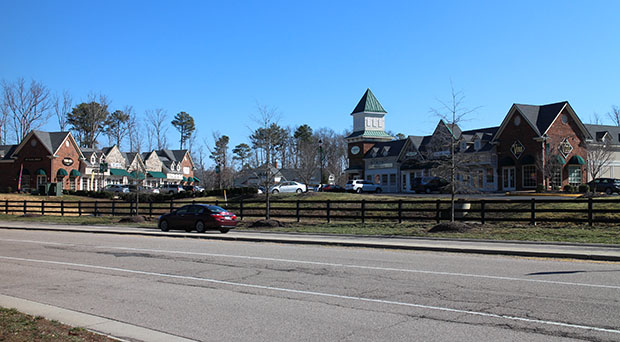 Years after the economy slowed the development to a crawl, Midlothian-based Riverton Associates is about to finish up Winterfield Place with a project that’s the first of its kind in Powhatan County.

Riverton, led by developer Casey Sowers, received zoning approval this month for phase two of Winterfield Place, a collection of residential neighborhoods and village-style retail along Winterfield Road at its intersection with Huguenot Trail and Robious Road.

Riverton plans to develop 50 acres between that intersection and the nearby Independence Golf Club as a mixed-use development with 200 apartments, 22 detached “golf villa” dwellings and a maximum of 75,000 square feet of retail, commercial and office space.

The $50 million project, which would maintain existing wetlands in the middle of the site as an open space area, would continue the retail-village development style that Riverton started with the Winterfield Place shopping center on the opposite side of Winterfield Road. 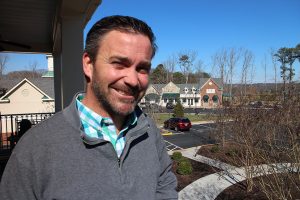 Sowers said the new phase is one of the only mixed-use projects of its scale in Powhatan County and the first significant apartment project the county has approved.

While apartments can translate to some as primarily serving transient, short-term tenants or younger families with children, Sowers described these apartments as high-end one- and two-bedroom units that would appeal more to retirees looking to downsize.

“I think there’s a gap in high-end, luxury apartments, particularly in this area and particularly marketed to more affluent, active adults,” he said. While the apartments would not be age-restricted, Sowers said they would likely appeal to older residents who want to rent instead of own, or who have sold their homes and freed up that equity to use for retirement.

“The perception of having to buy a house to be successful has changed,” said Sowers, referring to the proliferation of apartments seen in the city core. Where younger renters are typically drawn to the city’s urban areas, older, more affluent people are choosing to live in apartments and choosing not to be “house rich and cash poor,” Sowers said.

“Those are the people we’re proposing to serve here,” he said. “People have needed a lot of convincing that there’s a reason for this (development). I think it’s a real untapped market that’s going to be successful.”

The commercial and office space – intended to be walkable and easily accessible to the three existing neighborhoods that make up Winterfield Place: Bel Crest, Bel Bridge and the golf-course-centered Founders Bridge – would include a convenience store, restaurants, a car wash and a gas station, which Sowers said is lacking and needed in the area.

Sowers said phase two was originally planned to be a grocery-anchored shopping center, but he said the market demand has since shifted toward smaller retail.

Riverton has owned the land since the early 2000s, when Sowers said it was initially zoned for commercial use. The rezoning approved on Feb. 1 designates the area as a Village Center Planned Development District. 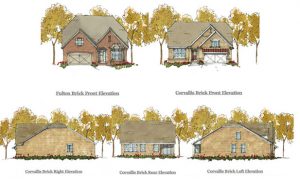 The 22 “golf villas” would line Independence Golf Club and be an addition to the Founders Bridge community. The dwellings are being designed by Eagle Construction of VA, which would be the builder on that portion of phase two.

Sowers said Riverton would likely build the commercial space, as it did for the first phase with Winterfield Place shopping center. The newer commercial area would feature the same architectural details that were used in the shopping center, as would the apartments.

Riverton is working on that portion of the project with Poole & Poole Architecture, which shares a building with the developer in the shopping center.

With county supervisors’ unanimous approval this month, Sowers said he is preparing to start site work in the next 30 days. He said the project would take about two years to complete, potentially coinciding with a planned widening of Huguenot Trail/Robious Road to four lanes between the Chesterfield county line and State Route 288.

Deputy County Administrator March Altman said Winterfield Place is the first mixed-use development approved by Powhatan supervisors and the first large-scale apartment project in the county. He said the development was enabled by the county’s 2010 Comprehensive Plan and a revised zoning ordinance that encourage village-style development.

“We are we excited about the proposed development and know that Mr. Sowers will deliver a project that is the same quality of Winterfield Place and Bel Bridge/Bel Crest,” Altman said in an email.

While preparations for phase two get underway, construction continues in Bel Bridge and Bel Crest, where several homes were under construction last week, adding to dozens of homes already built.

Homes in those subdivisions are being built by Roseland Custom Homes and Bel Arbor Builders. Roseland’s homes are sold through Roseland Realty Company, while Bel Arbor is represented by Tammy Glenn at Berkshire Hathaway HomeServices PenFed Realty.

Riverton was started by Casey’s father Buddy Sowers, who died in 2014. The father-son team was behind the massive Roseland development which encompasses land southwest of Route 288 and Woolridge Road and stalled in the wake of the housing market downturn. Almost half of Roseland’s land – 622 acres– was sold in an auction after the development was put into bankruptcy in 2011.

Casey Sowers said Riverton is planning to bring back part of the Roseland property – between 350 and 600 acres – for rezoning later this year. The company is also involved in plans for a new elementary school in that part of Midlothian, as well as an age-restricted community and a smaller mixed-use project farther west in Powhatan.

Editor’s note: This story has been revised to include Bel Arbor Builders as a builder in the Bel Crest and Bel Bridge subdivisions and Tammy Glenn as the company’s representative. 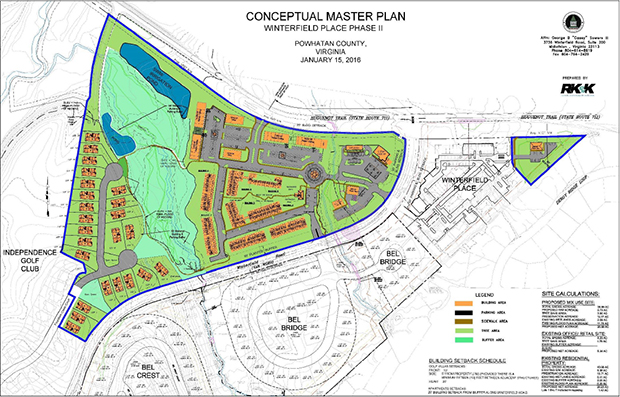 The 50 acres are located across Winterfield Road at its intersection with Huguenot Trail and Robious Road. Image courtesy Riverton Associates.