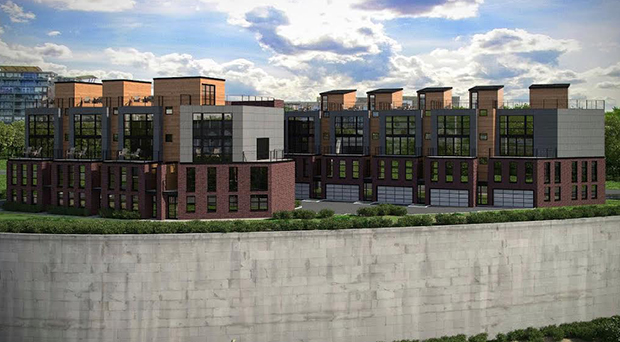 In one of the first non-apartment new real estate developments to hit Manchester during the Southside neighborhood’s recent rush of construction, a local developer has townhouses on the drawing board.

Developer Jeremy Connell of Pareto LLC is planning 12 townhomes on a half-acre site at the foot of the Manchester Bridge, at 501, 517 and 523 W. Seventh St.

The project, called 7west, received preliminary approval from the city planning commission Monday. Final approval would come from a subdivision plat review, after which Connell expects to begin construction in April.

The three-story townhomes, each spanning 2,900 square feet of finished living space, will include two-car garages, rooftop patios and retractable storefront-style glass doors that open up to third-story balconies. 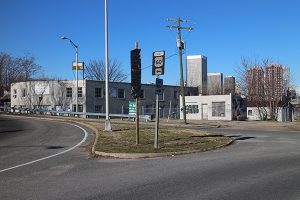 7west will replace a long vacant building that has housed a private investigator’s office, among other tenants.

Each unit will consist of four bedrooms and four bathrooms and include an option for an elevator. The units will be priced in the $700,000s, with the first four hitting the market in August or September.

Connell is marketing the units through Patrick Sullivan of One South Realty Group. The architect on the project is Mario DiMarco, who is also an investor along with Connell.

Connell, whose projects have included the Manchester Pie Factory building, said he has been eyeing the 7west site for more than a decade.

“I first pursued this property 11 years ago,” he said. “I’ve lived in Manchester for 12 years and had identified that particular site as one of the best spots in the city.”

“The proximity to downtown, where you could literally be downtown in one minute; the view is as good as any view in the city,” he said. “I think the best views in the city are from south of the river looking to the central business district.”

Connell said the property is under contract and set to close next month. He’s purchasing the property from descendants of the family behind S.T. Perry Paint Co., which was housed in of the three buildings on the site. City records list the owners as M. Douglas and Stephen P. Terry and Patricia Marie Rapp.

Connell declined to disclose the purchase price for the property, which also housed an art gallery and a private investigator’s office over the years. He said the buildings have been unused for several years.

The city’s most recent assessment valued the property at $358,000. Connell would not disclose the overall cost he’s projecting for the project.

The townhomes will join hundreds of other residential units that have added to Manchester’s building boom in recent years. The 150-unit Terraces at Manchester wrapped up last year on the other side of Semmes Avenue. A conversion of the Plant 1 building at 403 Stockton St. will add even more apartments, and the initial phase of Reynolds South, a 17-acre mixed-use project, is also underway.

Where those projects feature apartments, Sullivan noted the 7west townhomes would add to the area’s home ownership options. He said the units would appeal to buyers who want an urban lifestyle and access to the river without having to sacrifice modern living amenities.

“It’s as close as you really can get to downtown without having to be right there, and you get the better view,” Sullivan said, adding that the site has easy access to the pedestrian walk flood wall and Belle Isle and is a short bike ride to city sites such as Tredegar.

“Now you have the bike lanes on the Manchester Bridge; you can bike right to work,” he said.

Connell said he hopes 7west and other residential projects in Manchester help to attract more commercial and retail development in the area.

“Hopefully we’ll see more businesses and retail opportunities come along,” he said. “At this point in time, we’ve got plenty of residents that are coming to the area, and now everybody’s wishing for that elusive grocery store and other retail opportunities.”

Jeremy is going to kill it at this location. And who knew he’d give it an industrial flavor with Marco’s design?!!

More info can be found at 7westRVA.com

Congrats to Jeremy and Patrick! Great to see these townhomes as a complement to all the apartments in Manchester!