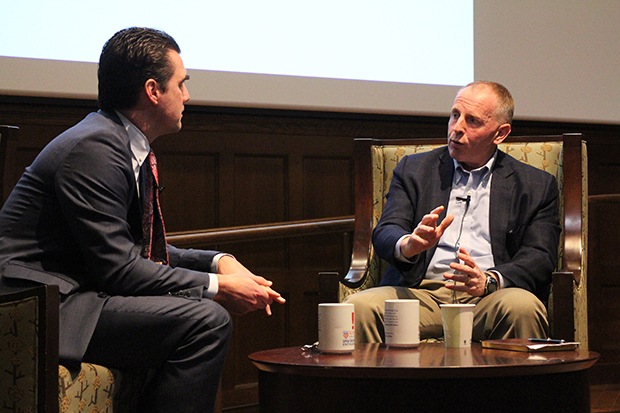 There was an elephant in the room at Queally Hall Wednesday morning and he was doing all the talking.

Elephant Auto Insurance CEO Kevin Chidwick was the guest for the latest installment of the Robins School of Business’ C-Suite Conversation series on the University of Richmond campus.

Chidwick spoke with Richard Coughlan, associate professor of management, about his four years at the helm of the Henrico-based company, its growth in that time and what he feels sets it apart from competitors.

Speaking in his distinctive British accent, Chidwick recounted his transition from Admiral Group PLC, a UK-based car insurance provider and Elephant’s parent company, to Richmond at the start of 2012, when he joined Elephant as its top executive.

Previously the CEO of Confused.com, which Coughlan described as the UK version of insurance comparison site Compare.com, Chidwick discussed the challenge in setting insurance prices without knowing the final costs of services resulting from a crash.

He said a difference that helps keep Elephant’s prices competitive is to know more about customers in order to adjust their rates accordingly. While he said the company expected to lose money attracting customers since it started in Richmond in 2009, Chidwick said the mindset has been to look at the long-term profitability of those customers and retain their business.

Chidwick noted the company’s growth, from about 45 employees in 2009 to about 500 today. That growth prompted its move in late 2014 from an office space near Innsbrook to Deep Run I, one of two buildings that once housed Circuit City’s headquarters.

While the move more than doubled its space to 54,000 square feet, Chidwick noted that none of that space has been divvied into offices.

“We make it an open environment,” he said. “There are no offices at all. We’ve got nearly 500 people in our office right now, and no one has an office. It helps everyone feel like we’re in this together.”

While that approach has helped in attracting new employees, Chidwick said the company has struggled to attract senior leadership talent, which he said would be a priority as the company moves ahead. He said Elephant currently serves 10 cities in four states, and the goal is to expand and become nationwide.

“Now we’re at a point where we need to build up, go to more states and, eventually, be everywhere.”

It would be interesting to hear his thoughts on why they have struggled to attract Sr leadership. Is it the lack of people in Richmond, their culture or some combination of both or something else?

Travis – a video of the entire conversation will be available at the Robins School’s website early next week. I believe Kevin feels that the process of building their brand among those who might consider these positions is still underway. He acknowledged that establishing relationships with MBA programs in the area is part of that process.