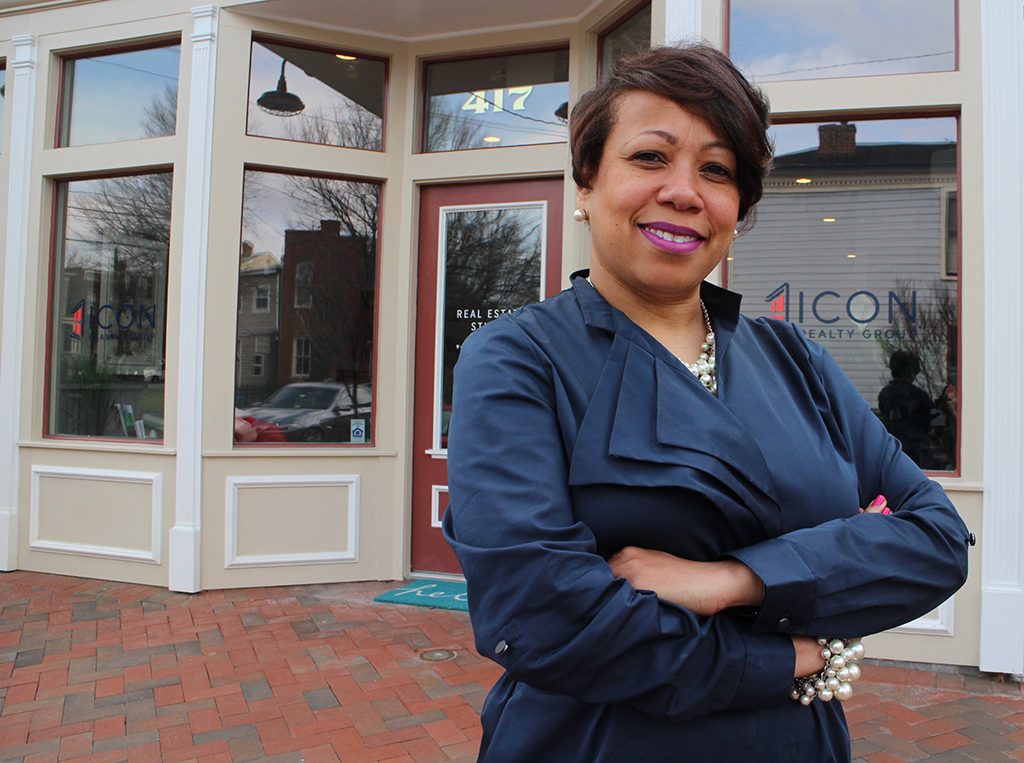 Catina Wright has had the idea for Icon Realty in the works for several years. Photos by Jonathan Spiers.

A local real estate broker is breaking out on her own with a new storefront in her busiest neighborhood.

Catina Wright has set up Icon Realty Group in a space at 417 N. 22nd St. in Church Hill, across Jefferson Avenue from Jefferson Park and Alamo BBQ.

The move comes one month after Wright, a 12-year veteran of the local real estate scene, cut ties with Re/Max Commonwealth to start Icon Realty, a team name she’s operated under for the past two years. She formed the Icon Realty LLC in 2012, two years after she received her broker’s license.

“This was a career goal of mine – a 10-year career goal,” Wright said. “I have three girls in school, which held that off, but I think now is a better time than it would have been. The market is right.”

Icon leased its office, which is in view of Alamo BBQ (far left).

Wright is leasing the 700-square-foot space from area resident Charlie Field, who purchased the half-acre property through an LLC in 2007. Wright said Field built the two-story building, which includes an apartment on the second floor and another behind her office. Icon Realty occupies the front of the building’s ground floor.

Wright selected the building after scouring the neighborhood for available space. She said it was important for her to locate in Church Hill, which is where the majority of her listings are located.

“This was the area I wanted to be in when I opened my doors. We’ve done a lot of business here. It feels like home,” she said. “I just love to see what’s happening in the community. Not to mention, it has very good food.”

Wright said she left Re/Max with 23 contracts and 17 active listings – 10 of the latter in Church Hill. Many of those listings have been through the Better Housing Coalition, which Wright has sold homes for as part of the nearly complete Church Hill Model Block project.

Wright has hired an office and sales manager and another licensed agent, with plans to add another agent this month. She said the small staff size and office space fit with her vision for Icon – a name she adopted from a brand of haircare product.

“I like a more boutique feel, and I think we’ve accomplished that,” Wright said. “I want to maintain a personal experience with my clients, and I feel that this space captures that.”

Congratulations Catina! This is awesome!