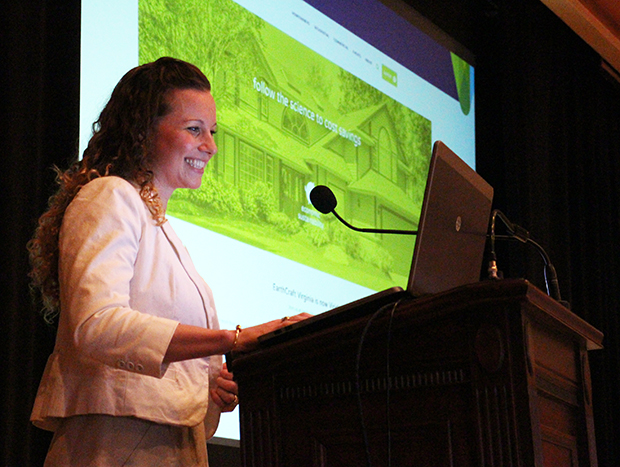 EarthCraft Virginia has unveiled a new name to mark its 10th anniversary advocating for eco-friendly construction, and as an acknowledgment of its geographical expansion.

The nonprofit, a locally based statewide group that administers the EarthCraft brand of green-building programs, is now called Viridiant – a name derived from “viridis,” the Latin word for “green.”

The new brand was unveiled at the group’s seventh-annual Sustainable Leadership Awards, which recognize builders and developers who incorporate energy-efficient construction and technologies into their projects.

The event was held Tuesday in the ballroom of the Bolling Haxall House downtown. Executive Director KC Bleile presented a video explaining the new name and brand, as well as an overview of the group’s growth over the past 10 years. A new website, viridiant.org, has also been launched.

The new name recognizes the group’s expansion into Washington, D.C., and Maryland, and is intended to broaden its services beyond EarthCraft, an organization and brand of services based in Atlanta, Georgia. While Viridiant will continue to offer EarthCraft programs, it also plans to add more services and certifications in areas such as in-home energy monitoring, online energy assessment tools and unbiased consultation on emerging topics such as solar energy and energy-efficient home mortgages.

The group provides advocacy of green-building methods through education, consulting and certification services.

On the rebrand, it worked with Kelly O’Keefe of the VCU Brandcenter and PadillaCRT on brand positioning and developing the new name. It also worked with local ad agency Elevation, which assisted with the logo, graphic platform, video and promotional items.

Builders and developers from throughout Virginia were recognized with awards for various projects. Locally, Richmond-based Bain-Waring Builders was ranked tenth in a list of the top 10 high-performance homebuilders of the year. Health E Community Enterprise of VA was recognized for its solar-powered homes in the Fulton area. And other local firms were nominees in certain categories: Evergreen Homecrafters in the category of single-family builder of the year, and Richmond Metropolitan Habitat for Humanity in the Habitat for Humanity affiliate of the year category.