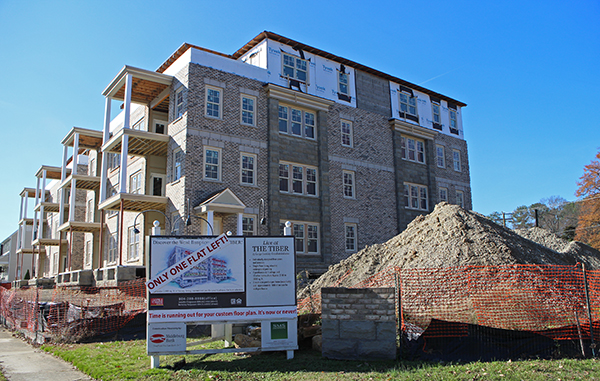 The Tiber remains unfinished and has had a sign promoting one unit remaining for some time.

Less than two weeks after purchasing the loan on a stalled high-end Libbie Avenue condo project, the property’s former contractor is quickly pushing to foreclose.

The long-delayed Tiber development at Libbie and Guthrie avenues is scheduled for an April 26 foreclosure auction on the steps of the Richmond Circuit Court at 10 a.m., according to a legal notice. The foreclosure is being pushed by Libbie Guthrie LLC, which took control of the $6.27 million loan on the property a few weeks ago.

Libbie Guthrie is controlled by John K. George, who is a part-owner of the Tiber’s development group, Tiber Partners LLC, and owns the general contracting firm that was fired from the construction site after delays and disputes with his partners. George’s partner in Libbie Guthrie is David Posner.

“The loan has come due and has not been paid,” Courtney Moates Paulk, a Hirschler Fleischer attorney who represents Libbie Guthrie, said in an email. “Given the current status of the loan and the project, Libbie Guthrie elected to initiate foreclosure proceedings.”

The loan for Tiber was issued in 2013 by Middleburg Bank, which sold it to George and Posner’s group. Locally based Stuart Simon Law Firm has been enlisted to handle the foreclosure.

Should the foreclosure move forward, it could give George a chance to gain full control of the project and attempt to finish it. Paulk previously said that George and Posner’s hope is to see construction completed as soon as possible.

The pending foreclosure auction is the latest chapter in a chain of events that has seen the Tiber delayed well beyond its initial planned completion date of last year.

The project has sat idle as George and the other Tiber developers air some of their grievances in circuit court. George filed a lawsuit late last year accusing his partners of wrongfully terminating his firm from the construction job. The other Tiber partners fired back, arguing George was incapable of completing the job. Meanwhile, prospective Tiber residents who put down deposits have filed liens and lawsuits of their own.

Long & Foster has handled the listing for the Tiber condos. Scott Shaheen, the brokerage’s regional vice president, said the deposits that have been paid thus far on 14 Tiber condos are being held in escrow in anticipation of the project being completed.

Congratulations John. You deserve the opportunity to finish the Tiber and show everyone what a great builder you truly are. I can’t wait for it to be FINALLY completed.

John is the one who DIDN’T get it built in all these years. He was fired because he didn’t live up to the contract. The owners know this. I don’t see why you are congratulating him.

My concern for the pending provided they still go forward with their contracts) and future homeowners is if there’s any potential/unforeseen damage from the weather elements due to the amount of time the structure has gone unfinished. I hope the new builder takes this into consideration, e.g. performs an assessment and makes the necessary repairs. Seems that development has been out in the open for a loooooong time.

It is easy to see who is at fault here. If the builder couldn’t do it in a timely manner before and caused the loan to default why the hell does he think he can get it done now? And then why did the bank sell him the note? Somethin’ just aint right here. I think some reporter could find a gold mine of a story here before some legal action occurs that shuts everybody up.
It is the same builder who was fired for not doing the job who bought the note.

For someone that says ” it’s easy too see who’s at fault here” you seem to be pretty clueless William. Middleburg sold the note because they lost confidence in the developer’s (Tiber Partners) ability to finish the project. They had 4 months after firing the contractor to hire new one and restart construction. The builder was not fired for issues pertaining to the quality of the construction. Maybe you should wait for the reporter to find the “goldmine” before you start drawing ridiculous conclusions.

Jeff, how am I “clueless”? John K George & Company was the builder who did not live up to the contract. I am not making conclusions. That is a fact. The reason Middleburg sold the note to him seems to be because he and his new partner came up with the most cash. It may be interesting to see if a reporter finds that the partners had a builder all lined up and find out what the real hold up was. You are absolutely right in the we should all wait until a reporter looks deeply into this and find… Read more »

I wouldn’t touch this place with a 100-foot pole. Feel for those who have made deposits as this investment is likely the worst in Richmond, with possible exception of Carillon Place.