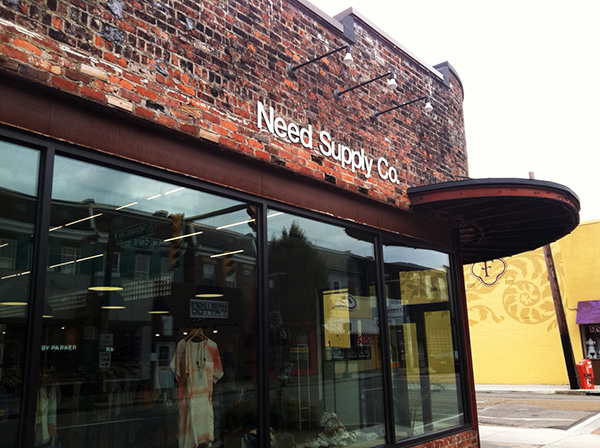 A popular Carytown retailer’s turf battle over the word “need” has come to an end and the competitor it sued for trademark infringement has rebranded.

While terms of the resolution are confidential, Need LLC, which operated as Need through an umbrella brand called the Edition Collective, last week announced its new name: Imprint.

Need Supply said in its suit that it has a registered trademark on “Need Supply, a common law trademark on the word ‘Need’ and has a pending federal trademark application for ‘Need,’ as it pertains to identifying clothing.”

It sought to permanently prevent Need and its employees from using anything related to the trademark in question, including operating a website with the word “need” in the domain name.

In a letter explaining the new Imprint brand on the company’s website, Edition Collective founder Matt Alexander did not address the lawsuit directly, nor did he say the name change was a result of the resolution reached with Need Supply.

His letter described his previous use of the Need brand as a last minute choice made on the fly when launching the company in 2013 and that the brand “has been plagued with issues (of my own creation) since the outset.”

He then explained that the success of his company’s expansion internationally last November – the same month it was sued by Need Supply – “served to illuminate, emboss, underline, and highlight that Need was an inescapably generic name. We couldn’t protect the IP, nor could we establish company registrations abroad. We were simply hamstrung.”

Alexander did not respond to emails sent last week.

LeClairRyan attorney Steve Faraci, who with colleague Ed White is representing Need Supply, said he and his clients had no comment on the case, other than to say “All matters of controversy between the parties have been resolved.”

Need Supply opened in Richmond in 1999 and keeps a storefront at 3100 W. Cary St. Owned by Chris Bossola and Gabriel Ricioppo, the company eventually branched out with an online store that has since helped fuel impressive growth. The company landed on Inc. magazine’s list of the nation’s fastest-growing companies in 2013. Last year it announced expansion plans for stores in Asia.

This isn’t the first time that a single word landed a Richmond company in a court battle. Henrico County-based Strangeways Brewing got into a trademark dispute over the word “strange” a couple of years ago.

That case resulted in a settlement and a special batch of beer.