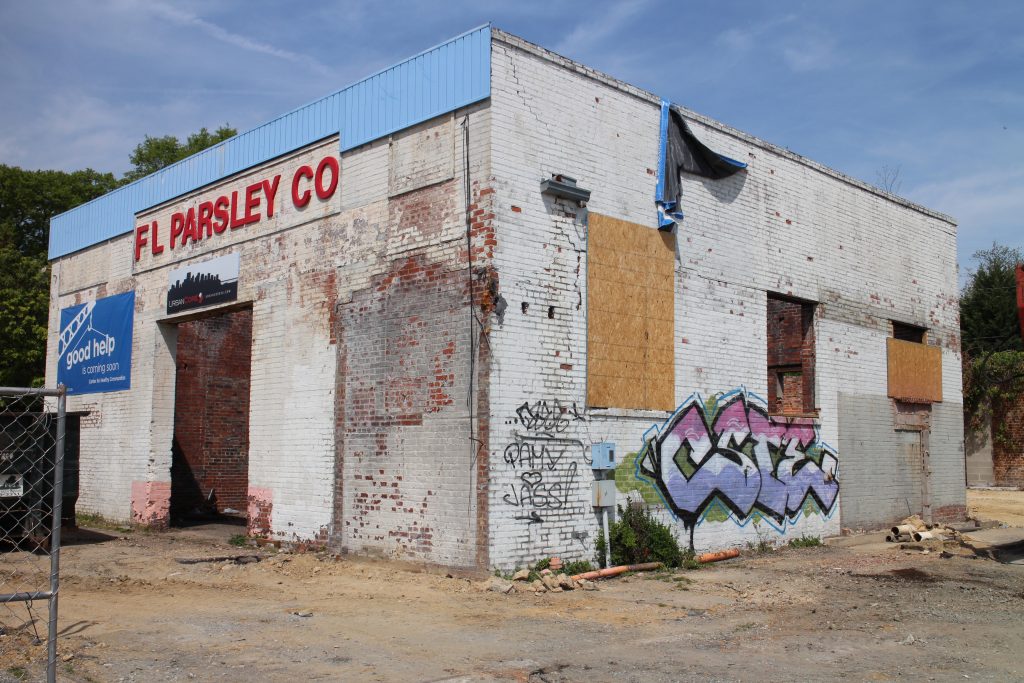 Parts of the existing structure will be preserved in the redevelopment. Photos by Michael Thompson.

A café and kitchen is set to rise at the site of the former Parsley’s gas station as another Bon Secours East End redevelopment project gets underway.

The healthcare giant’s Parsley’s Center for Healthy Communities is planned to open in September at 2600 Nine Mile Road. Plans call for a 3,250-square-foot building that will house a coffee shop run by local nonprofit Church Hill Activities and Tutoring (CHAT), a commercial kitchen run by Bon Secours Richmond’s Building Healthy Communities Initiatives program, and a community room for the public to use.

On Tuesday, representatives from Bon Secours, the city and CHAT gathered for a ceremonial groundbreaking for the $1.5 million project that is being funded by philanthropy drummed up by Bon Secours – $1 million is already on the books, according to chief development officer Cindy Reynolds. 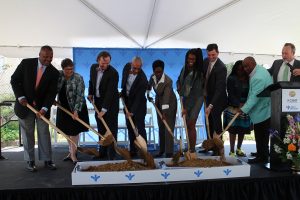 The event included a ceremonial shoveling.

Mark Kronenthal, a senior policy advisor for the mayor’s office, said in his remarks to a crowd of about 70 people that private redevelopment of the kind seen in Scott’s Addition is what’s needed in the East End. Parsley’s was touted in press materials as “the first significant and visible capital investment along the (Nine Mile Road) corridor in years.”

“It’s not just for those neighborhoods and those folks,” Kronenthal said of redevelopment in Scott’s Addition. “Government can’t change these neighborhoods alone. Your city needs your help.”

City Councilwoman Cynthia Newbille in her remarks alluded to plans for a “full-service grocery store in the near future” in the East End, but would not say more when later asked for comment. The Richmond Times-Dispatch reported earlier this month that a grocery-anchored development is being planned at the intersection of North 25th Street and Nine Mile Road on land that would be owned by the Richmond Redevelopment and Housing Authority. Bon Secours is aiding RRHA in that effort, according to the report.

Construction on Parsley’s is being done by locally owned UrbanCore Development. Downtown-based Baskervill is the architect. Bon Secours owns the half-acre site, which it acquired in 2014 for $98,000 from RRHA. The land was most recently assessed at $100,000, according to a city record.

Parsley’s is one of several redevelopment projects Bon Secours is doing in the East End, including an $8 million two-story medical office building in the works across Nine Mile Road.

I will celebrate it all when it opens and last over a year. This was all part of/tied into the Redskins Training Camp sponsorship deal and that “$8 million building” has not even seen its ground breaking yet.