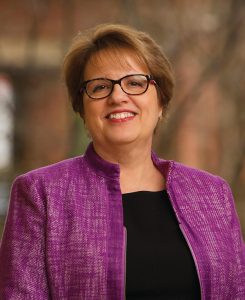 A giant of the Richmond medical market has a new top boss.

Bon Secours on Monday named Toni Ardabell as the new CEO of Bon Secours Virginia, a territory that includes eight hospitals in Richmond and Hampton Roads.

Her new position, which will begin May 1, fills a spot left vacant by Peter Bernard, who retired as CEO of Bon Secours Virginia last September. Ardabell has been CEO of Bon Secours Richmond since January 2015, a role she’ll continue to hold. She began with the organization in 2008 as chief executive at St. Mary’s Hospital.

Ardabell said a major part of her new role is to think beyond the walls of those eight hospitals.

“My major responsibility is going to be strategy in helping us move from where we are now, which is inpatient focused, to looking at population health, wellness, keeping people out of the hospital,” she said, alluding to trends in post-acute care and technology, such as allowing patients to be monitored remotely from home.

“It’s truly going to be about strategy of moving forward in a new healthcare world.”

In taking over for Bernard – whose 15-year tenure saw Bon Secours expand its physical footprint through real estate deals and grow from three hospitals – Ardabell said growth on her watch will extend beyond bricks and mortar.

“Our growth for the future may be less real estate, more programs and technology,” she said.

A Pennyslvania native, Ardabell began her career at West Virginia University Hospital, did a stint in a military hospital in Germany and spent the bulk of her time prior to Bon Secours at Inova Health System in Northern Virginia. The latter is where she got a taste for the executive side of the healthcare business.

“I knew fairly early I wanted to be in leadership. I always thought it would be nursing leadership,” she said. “Hospitals are more than nurses, as I like to say, and more than doctors. I loved being able to impact that bigger picture and help people understand that everything we do in a hospital touches the patient.”

Ardabell has a bachelor’s from Penn State and a master’s degree in nursing from Catholic University of America and an MBA from Marymount University.

On thinking about leading an organization of such size, Ardabell said she looks to characteristics inherent in Bon Secours’ mission as a Catholic-based nonprofit.