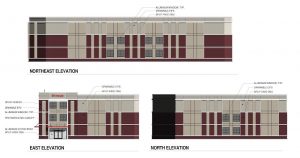 A piece of land that for years has struggled to secure a commercial user – despite its location in bustling Short Pump – is finally slated for development.

Three acres of a 4-acre property between Interstate 64 and Tom Leonard Drive this month received the endorsement of the Henrico County Planning Commission to house a $10 million self-storage facility.

Spartanburg, South Carolina-based Johnson Development Associates plans to construct a three-story, 115,000-square-foot facility that would feature climate-controlled storage with indoor access. The number of storage units has yet to be determined, said attorney Andrew Condlin of Roth Doner Jackson, who represented the developer.

The project is set to go to the county’s Board of Supervisors for final approval May 10.

The site, at 4110 Springfield Church Lane, had previously been pitched for a townhome development that was withdrawn just before the commission was to hear it last summer. After several failed attempts at securing a commercial user, the townhomes proposal generated interest from commercial developers, said Condlin, who noted a preference from the county as well.

“Ultimately, the county did not think residential use was appropriate on this property,” he said. “They pointed us to a number of commercial uses that would make sense at this site, given its location, and the property owner marketed it to a number of potential users.”

The property is owned by GAW LLC, which proposed the townhomes and acquired the land in 2014. It purchased the property in January for $1.26 million, according to county records.

Condlin said the owner has the property under contract to sell to Johnson Development, which has developed dozens of self-storage facilities in the Mid-Atlantic and Southeast, including two in the Richmond area: in Midlothian at 51 Otterdale Woods Road and Bon Air at Robious Road and Mall Drive.

Condlin said GAW LLC is retaining ownership of the property’s remaining acre, where a graveyard is located at the former site of the since-demolished Springfield Baptist Church. He said that portion of the property, which fronts Tom Leonard Drive, is being marketed for another potential commercial use.

Condlin has described the property as one of the last remaining parcels yet to be developed in the heart of Short Pump. He said construction would start on the self-storage facility immediately following approval from county supervisors.

The self storage business has certainly evolved architecturally since it began in the ’70’s. I used to build them with orange painted concrete block and pull down metal doors. Now they look like palaces!

Wonder if there is enough area demand for self storage with a new facility just about to open relatively nearby near Cox & Broad, and another about to be built behind Buffalo Wild Wings off Pouncey Tract.