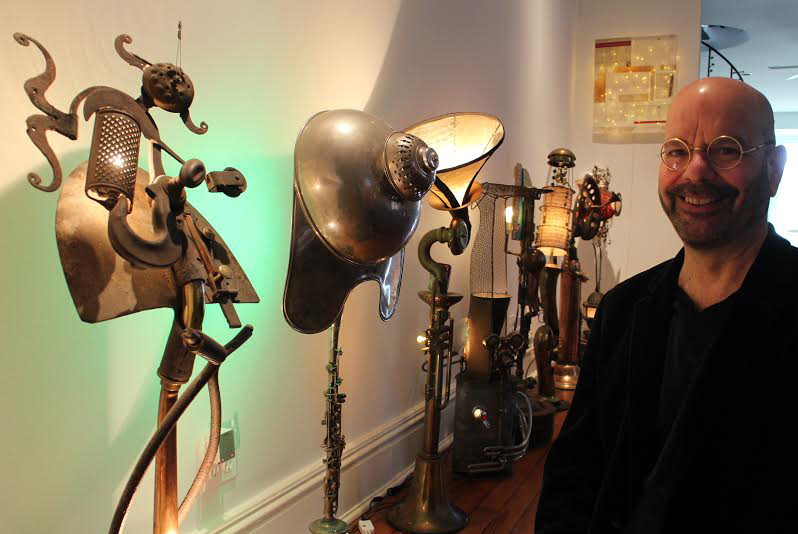 Kogan lit by some of his creations. Photos by Jonathan Spiers.

After a career in IT that sent him to Europe two decades ago, a Richmond native has returned to the States, and his hometown, with a new profession: light sculpture.

Sanford Kogan, an alumnus of J.R. Tucker High School, was more than a decade into a career with Hewlett-Packard when the company transferred him from Silicon Valley to France, where he explored the local art scene and in his spare time worked on his sculptures that combine repurposed objects with light art displays.

While his art received notice, so did Kogan from HP, laid off in a round of cutbacks that gave him more reason to focus on his art. After a visit to Richmond, Kogan moved back last fall, having found his hometown changed – and more conducive to starting his new business in art. 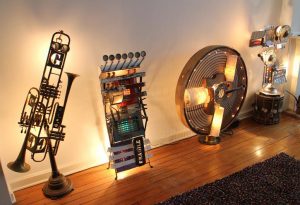 Some of Kogan’s pieces.

“From a business perspective, it’s much easier to do business in the United States as a business owner,” he said. “There’s lots of red tape and complication and expenses (in France); you have to join unions. It’s just much more complicated and not as streamlined. So just from a business climate, things are much freer here in that sense.

“And Richmond is a very livable city, the art community here is really fantastic given the size of the city, and it’s close enough to D.C. or New York,” he said.

Since buying a home in the Fan last year, Kogan has been re-acclimating to Richmond and going about establishing himself in town, meeting with area art galleries and creating an online presence to try to sell his pieces.

“Even though I worked for HP, setting up an art business is a completely different set of skills than having worked in the computer industry,” Kogan said. “I really don’t know what I’m doing. I’m smart enough that I can figure it out, I think.”

Kogan describes his art as “assemblage light sculptures,” using repurposed objects such as brass and copper fixtures and pieces of musical instruments and illuminating them with light that reflects off their surfaces, creating an additional visual element that he calls “painting with light.”

“I’m incorporating light within the context of those materials,” he said. “It’s sort of a symbiotic relationship between how light interacts with the form. Not only is the light illuminating the form, but almost more importantly, the form transforms or adjusts or plays with the light.” 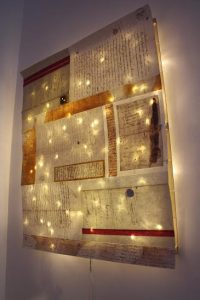 Kogan’s other pieces include collages of old parchment and handwritten letters that are likewise illuminated by lights beneath their surfaces. Less labor-intensive than the one-of-a-kind sculptures, which Kogan said can each take a month to create, the collages can be reproduced and made in about a day.

Kogan said the collages would likely sell for about $500, while the sculptures would be priced considerably higher. He said he sold several sculptures during his time in Europe, where he displayed them at gallery shows in France and Germany.

In putting the pieces for sale, Kogan said he is partly trying to free up inventory while also making enough money to make more art. While he acknowledged the sometimes conflicting relationship between art and commerce, Kogan said he considers his art his new profession.

“People will say that it’s a hobby, but it’s not a hobby. It’s my work,” he said. “Even if I didn’t sell anything, it’s still my work, it’s still my profession.

“I don’t believe you can distinguish between those people who work and those people that don’t work based on how much money they make,” he said. “From my point of view, that’s not a critical factor. It’s how dedicated you are to the particular practice that you’re involved in.”

Kogan said he was drawn to visual arts as a teenager and wanted to pursue a career in photography but followed the advice of his parents instead.

“My parents were, probably rightly so, very practical and said, ‘No, you’re going to university and you’re going to get a good job.’ In a sense, my experience in high-tech was a detour away from my art practice,” he said.

After picking up degrees at Cornell University and the University of California-Santa Cruz, Kogan started with HP and worked in a variety of roles in a 22-year career.

A severance package and a job teaching English at a university afforded him time to pursue his interest in art, and eventually he was invited to participate in gallery shows in Grenoble and Berlin.

A desire to reconnect with his American roots and culture brought him back to Richmond, and he currently splits his time between his hometown and France, where he finds many of the objects he puts into his pieces. Because the objects are typically old and have little value, he said the costs to assemble and produce the pieces are minimal.

“If you look at the materials in any one piece, they’re not expensive materials, but one of my capabilities is to take these pieces that have no real value and assemble them into a form that gives them value,” he said.

While he could go back to computer science or teaching, Kogan said he is determined to make art his full-time profession, and to make his art a successful business.

“If I wanted to make money, there are lots of easier ways to make money. I could go back into high-tech; I’ve got international experience. I haven’t really worked that angle since coming back, because I haven’t had to up until now – I’m okay for the moment, financially – and the reason for coming back was to try to promote this work that I’m doing,” he said. “I think it’s valid, I think it’s important, and I want to put it out there.”