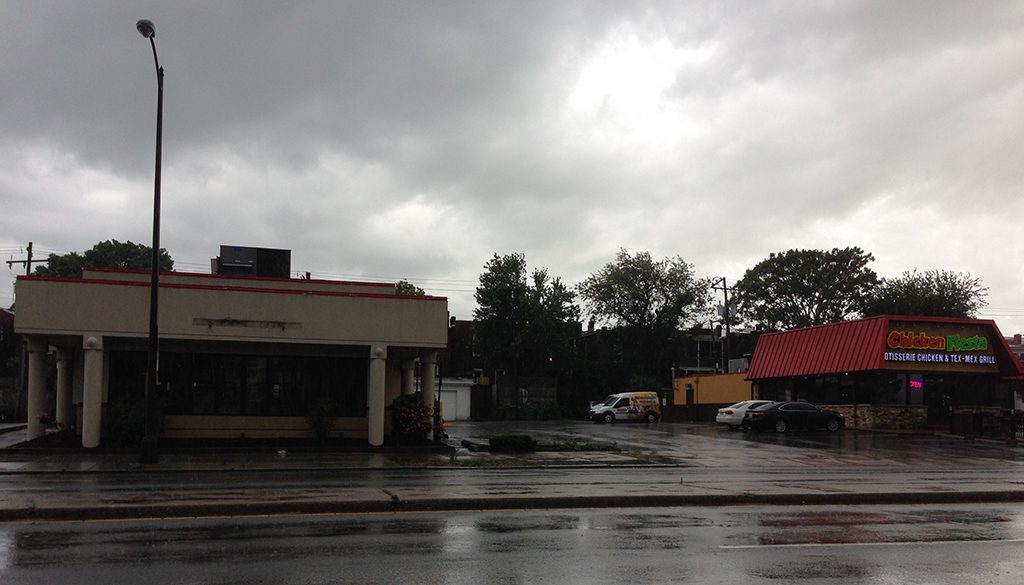 Zaxby’s has stripped the Arby’s signage from the property and has only to look next door for competition.

A group of franchisees of a fast-growing chain of chicken restaurants forked over seven figures to land the brand’s first location in the city of Richmond.

A Zaxby’s franchise is planned to open this fall at 2309 W. Broad St., in place of a recently shuttered Arby’s that had been there since 1968.

The new Zaxby’s location is backed by a group called CWC Food Services, which comprises Ryan Converse, Bryan Willis and James Cannon, who own the brand’s franchise rights for much of the Richmond market. The group paid $1.71 million for the 3,256-square-foot property in a deal that closed April 25, according to city records. It was most recently assessed at $806,000.

Converse said plans call for keeping and remodeling the existing building. He and his partners opened the first Richmond Zaxby’s, a fast casual chicken chain, in February at 5816 W. Broad St. (that location is temporarily closed after a car ran into it). They opened a second Zaxby’s in April at 9110 Staples Mill Road.

“This will be the first one in the city,” Converse said, adding the city’s density made it hard to find a location. “When this opportunity came up for us, we were shocked.”

Converse, 31, moved to Richmond from Georgia 10 months ago to lead Zaxby’s push into the area. In addition to the city location, his group has plans for a total of nine Zaxby’s in Henrico. There are forthcoming locations planned for the Wyndham area on Nuckols Road and at 4788 N. Laburnum Ave. in eastern Henrico. CWC Food Services bought its rights to the Richmond market in 2014.

“It’s been a long road to get open in Richmond,” Converse said.

Converse worked for more than a decade on Zaxby’s corporate side, including a stint as the Georgia-based company’s first mascot, a large chicken. The company was founded in 1990 and has opened more than 700 locations.

“We’re a regional powerhouse in the South,” Converse said, adding that Richmond being home to Zaxby’s fans made it an attractive place to expand. “I think Richmond is going to be a whole different place in 10 years. It’s kind of like a secret market. It kind of reminded me of a young Atlanta.”

Converse would not discuss the financials of his group’s push into Richmond. Zaxby’s has a franchise fee of $35,000, according to its website, and puts the initial cost of opening a franchise between $215,100 and $655,000. Converse said there are other ownership groups that own the Zaxby’s rights to Hanover County and Chesterfield County.

The new West Broad location will be next door to Chicken Fiesta, a popular Richmond-based chain that has three area locations in the area.

Not nitpicking, but the original Arbys was on the adjacent lot where Chicken Fiesta now sits. If memory serves me correctly this was one of the first in town, the original ‘cowboy hat’ style with. Can’t remember for sure when they moved next door. I was just in there a few weeks ago, the store was very clean, service was very good, sorry to see them go.

Next to Chicken Fiesta and across Broad diagonally from Lee’s Fried Chicken,a Richmond institution. Lotsa birds to be cooked on that stretch of highway

Wow, for a long time on this stretch of Broad Street the quick dining options were less than inspiring. Just like the rest of Richmond, the area around the Science Museum has upped its game. Love dropping in on Chicken Fiesta an hour or so before a VCU basketball game.

According to Wikipedia, Atlanta was established in 1837. What does Converse mean by “a young Atlanta”

I’m guessing Converse may be about 175 or so. That would qualify him to reflect on the “young Atlanta.”

The Chicken Fiesta was built and served as Dairy Queen since the 1950s until mid 2000s according to the old tax card. The old Arbys was on the same spot but was redone in the 1990s. Welcome to Chicken Row!

Yay for more Zaxby’s! Looking forward to more locations in Henrico as the currently only open one on Staples Mill struggles to keep up with demand resulting in long lines. Amazing success story to only be 26 years old and have over 700 locations. They clearly offer a much desired product, service and customer experience.

Zaxby’s food is borderline inedible. Soggy chicken and fries, I threw my order in the garbage!

In John F. Gilbert’s book “Crossties to the Depot” on VA railroad stations there is an aerial picture taken of Broad St Station in the early 1970s and it shows the Arby’s and the cowboy hat sign in what appears to be the same location as today.

I have to agree with your opinion of Zaxby’s.

I didn’t see what all the fuss was about, tried the one on broad near Staples Mill, and was not impressed.