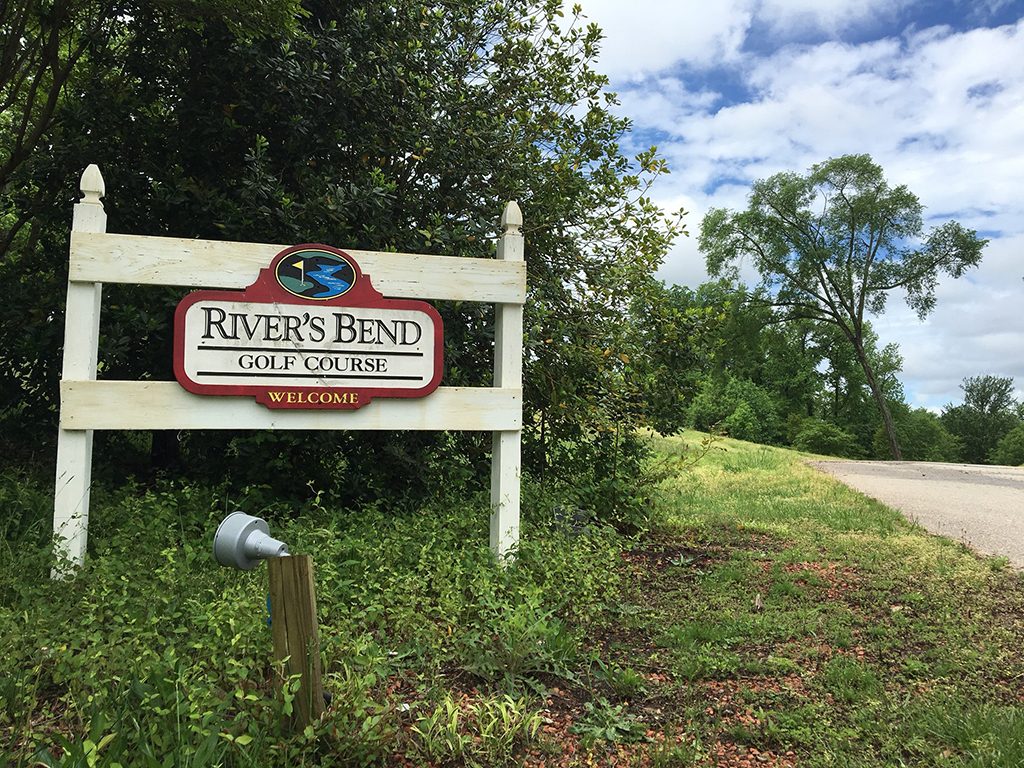 The course is located at the end of the 700-home River’s Bend neighborhood.

There may finally be a light at the end of the fairway for a down-on-its-luck local golf course.

Several deals are on the table to salvage and transform parts of River’s Bend Golf Club in Chester, including potentially selling the bulk of its riverfront land to a developer, conserving that land, and revamping the remaining golf holes as a cheaper, faster 12-hole course.

Meanwhile, much of the 177-acre property is in disrepair. Greens are dried out, cracked and shriveled. Fairways and tee boxes are full of weeds and overgrown. And golfers are few, as the club has no carts and has struggled to keep its irrigation system running. 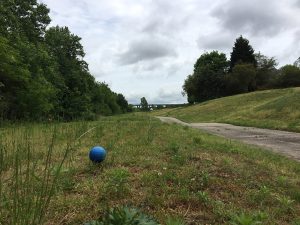 The tee box on River’s Bend 6th hole on a recent afternoon.

“It’s a terrible, terrible sight,” said Ronnie Kelley, who has owned the course since 2004 and has tried – with little success – to keep rounds coming in the face of increasingly poor conditions, financial difficulty, bankruptcy and an evolving golf industry.

The fate of the property now rests in the hands of PC Amin, president of locally based Shamin Hotels and a resident of the River’s Bend neighborhood.

Amin, who is not a golfer, controls the loan that’s secured by the golf course. The note was purchased by an Amin family LLC in 2009 from SunTrust after a somewhat complicated chain of events that included him investing money into the course in 2007, selling his stake in 2008, but still being on the hook for liability on the loan.

“I felt it was the best thing for me to buy the note and still have control over the asset,” Amin said.

Despite having lost millions on the investment thus far, Amin said he made the decision not to go after Kelley or foreclose on the property.

“I own the note. I can take (the course) over tomorrow,” Amin said. “But then, what do I do with it? I’m not in the golf business.”

Amin’s patience is all the more astonishing for the fact that the golf course’s land is all zoned residential, meaning he could have sold it to a developer at any point and recouped his investment at a profit.

“By right, we can build 100 homes there,” Amin said. “There’s so much waterfront and very nice topography. The value is there.

“We have stayed away from doing that because that would make everyone more angry.”

Instead, Amin has continued to patiently pay the taxes on the golf course while letting Kelley continue to try to run it. That was until the conditions of the course deteriorated beyond neighbors’ breaking point. 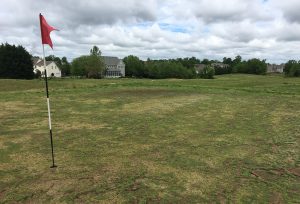 Kelley said the greens dried up last summer when he wasn’t able to maintain the irrigation system.

“Now it is affecting the neighborhood,” Amin said. “Residents feel the value of their homes is going down and maybe could go further down. Homeowners want somebody to do something about it.”

That has left Amin in the driver’s seat, but also in the precarious position of deciding what to do about a deteriorating property that was built as the centerpiece of his and his neighbors’ community.

The golf course’s troubles largely date back to the recession, which left it in a hole and threatened with foreclosure. Kelley put the business into bankruptcy and then crafted a plan to have riverfront property placed into a conservation easement, a process that never came to fruition.

David Martin, a local real estate agent who is acting as a go-between for Amin and the River’s Bend Homeowners Association, said a deal for the club’s future could be finalized before the end of the week and will likely involve one of two scenarios.

One is to potentially sell the course’s riverfront property – amounting to about 110 acres – to the Trust for Public Land, a conservation group out of Washington, D.C., that would look to maintain the land as a park. That section of the course sits along the James River across from Henricus Historical Park, making it a strong candidate for conservation.

The second scenario for the riverfront piece is to sell it to an unnamed developer who would look to build homes with a view.

Martin said discussions are ongoing with parties interested in both scenarios.

“We are working toward something that should be favorable to everyone,” Martin said.

Both scenarios would purposely preserve the remaining, non-riverfront golf acreage to prevent unwanted development behind residents’ homes and potentially give that land to the homeowners association for free. The ideas on the table include either converting the remaining holes – holes 5-16 – into walking trails and open space, or to bring them back to life as a 12-hole golf course.

River’s Bend Golf Club hugs the banks of the James.

Esther Lee, president of the River’s Bend HOA, said many residents are, unsurprisingly, not happy about the state of the golf course.

“We’re supposed to be a golf course community and we’re concerned of what the course has done to the reputation here,” she said.

Lee said she wasn’t aware of any formal proposals, but said the HOA board would be glad to consider any proposals. There is one particular direction the board is leaning toward.

“We would love to see it remain an 18-hole golf course,” she said.

Martin emphasized Amin’s patience throughout the process, both for Kelley and for his neighbors.

“It’s not about the money to him,” Martin said of Amin. “He’s trying to keep everyone happy in the community. They are very fortunate he happens to be the note holder. I don’t know if they realize how fortunate they are.”

“I want to live with peace of mind,” Amin said.

As for Kelley, the former golf pro isn’t sure what role, if any, he’ll have at River’s Bend should either of the scenarios play out.

“I’m hoping I’ll be very involved…” he said. “I know where everything is on this property and I believe I can contribute.”

Kelley, who lost one of his other courses, Prince George Golf Club, to foreclosure in 2013, said he’s optimistic about the idea of a 12-hole course at River’s Bend. It’s a trend that has gained some traction in the industry in recent years for people who still want to play golf but don’t have the time, money or patience for 18 holes.

Kelley said he’s also partial to the 12-hole idea because he, too, lives along the River’s Bend course.

“I live on the 14th hole. One of them is my backyard,” he said. “I worry about this every night.”

He said he’s managed to keep the course open with small amounts of money trickling in from occasional rounds of golf and a new restaurant operator that has set up shop in the River’s Bend clubhouse who has seen some success luring in diners from the neighborhood.

He said he does what he can to make the course at least somewhat playable for the few golfers who want a cheap round. Kelley said he charges $10 a round to walk the course.

Martin, the real estate agent, described Kelley as “kind of like a captain going down with the ship.”

“He’s there, he’s still sitting every day, just hoping – hoping that something will come out of all of this,” Martin said.

“He’s sitting right there with his fingers crossed.”

This would be an excellent parcel of land to be placed in conservation. Bird activity along this area of the James River would greatly benefit from this 110 acres. I hope Mr. Amin chooses the conservation route.

I would think the Conservation/Walking Trails route would benefit all. There is an abundence of wildlife on this section of river including Eagles, Osprey and Heron.
An alternate plan would also be to transform the 12 holes of golf into a nice 9 hole Par 3/Executive Course which Richmond lacks desperately.

Either decision … conservation area or 12 hole, well maintained, golf course would suffice. Someone else with a better track record needs to manage it though. The Kelly’s have proven time and time again they can not and it hurts the residents living in those communities. Thank You Amid for you patience and consisidering the home owners in your decision.