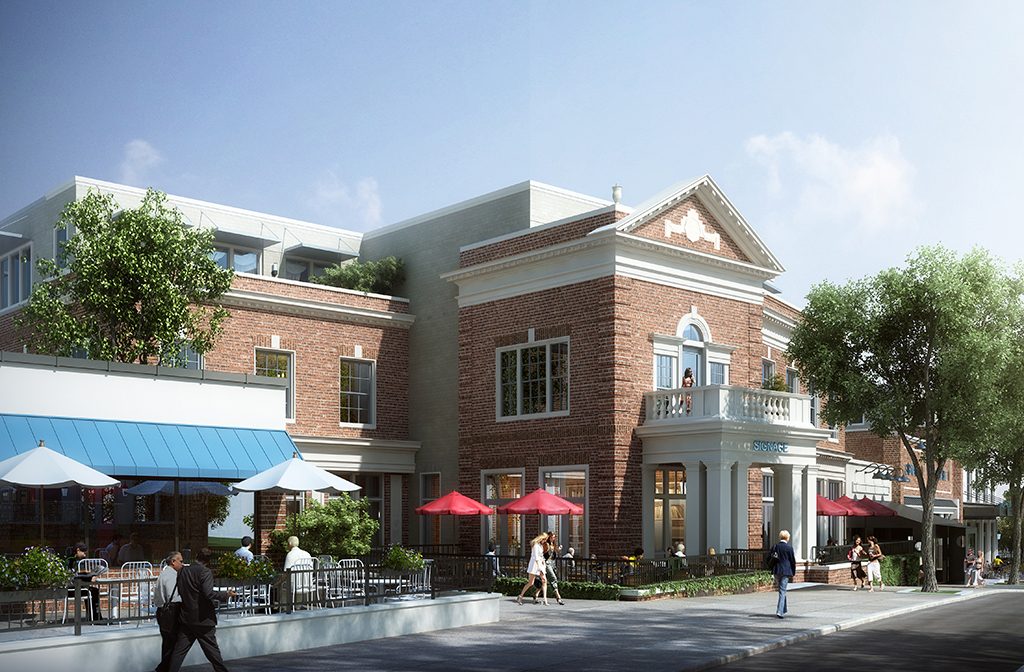 A rendering of the changes proposed for the Westhampton Theater.

In an effort to win over city planners and a vocal group of neighbors, the developers behind the proposed transformation of a West End movie house have tweaked their planned mixed-use development to make it shorter and smaller.

Jason Guillot and Stefan Cametas last week submitted revised plans for their Westhampton on Grove, a project that will redevelop the shuttered Westhampton Theater at 5706 Grove Ave. and a neighboring building into commercial and residential space.

Changes include scaling back the scope of the project from four stories to three to drop the building height from 60 feet to below 40 feet; decreasing the total size from 85,000 square feet to 49,800 square feet, which includes the existing Long & Foster space at 5702 Grove Ave.; and switching from nine condos to 12 apartments.

“That’s a 40 percent reduction in the size of the project,” Guillot said, adding that an underground garage that would have been dedicated parking for condos has also been scrapped from the plans.

Guillot, who is also a broker with Cushman & Wakefield | Thalhimer, said changes to the plans are a synthesis of feedback he and Cametas received from nearby residents and the city while also keeping in mind the economics of the project.

“That’s the delicate balance we’ve been trying to walk,” he said. “Our goal has been to compile all the feedback and work it into a newly revised plan.” 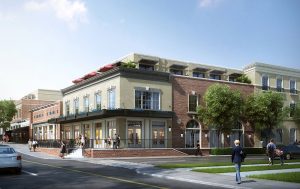 A rendering of the eastern end of the development.

The pair, through Westhampton LLC, is seeking a special-use permit for exceptions on height and outdoor dining for Taste Unlimited, a future tenant of the project that will be joined by Tazza Kitchen, Mango Salon and Long & Foster.

The first floors of the two buildings will have a combined 30,441 square feet of commercial space, 12,511 square feet of residential space, and another 6,132-square-foot space dedicated to a restaurant and patio.

Plans call for keeping some elements of the façade of the theater, but its marquee isn’t part of the revised design.

“It wasn’t as feasible to keep the existing façade as we had hoped in the beginning,” Guillot said. “It still pulls on the architectural cues of the building.”

The road to get to where Westhampton on Grove is today has, at times, been lined with yard signs protesting the development. Some residents have voiced concerns about maintaining the look and feel of the neighborhood and were particularly opposed to the initial design’s height. They went as far as starting a Save Libbie and Grove Facebook page and an online petition.

“Our pitch to the neighborhood has been, ‘We understand that,’” Guillot said, adding that he and his family live nearby. “At the same time, throughout the special-use permitting process, the public has a buy-in. Everything is up for discussion. There’s some give and take that happens here to encourage high-quality development.”

Guillot said the SUP process makes developers’ plans open for public input, which he sees as a positive. He contrasted the SUP process with a developer doing whatever kind of building is the cheapest and fastest within the letter of the law.

He said the Save Libbie and Grove signs used to bother him on his runs along Grove Avenue but he eventually realized he could only reach so many people. And while the process has been arduous and frustrating at times, Guillot said it’s been worth it.

“I probably would have told myself to expect more grey hair and a receding hair line,” he said, adding that some good suggestions came out of the public comments. “I truly believe the special-use permitting process works.”

The developers will present the revised plans for Westhampton on Grove at a public meeting scheduled for May 25 at Mary Munford Elementary School at 6:30 p.m. From there, the proposal will go to the planning commission for approval and then to City Council for a vote.

As noted, the Special Use Permit Application by Westhampton LLC, seeking an exception from the long-held and respected zoning height of 28’, has been revised and submitted for approval. While the predominant scale of the Libbie & Grove district is 15’-18’, the revised plan is @ 22’ higher. With most buildings in the area at one story, their plan is for 3 stories. This completely changes the predominant scale and therefore character of the neighborhood, and sets the stage and precedent for the new property owners of the Muhleman block across the street (from the BP to Granite Avenue), to… Read more »

Take a deep breath people. The renderings are beautiful. The third floor has a noticeable setback that will mitigate any “canyon” effect. The sidewalks are wide and feature pedestrian friendly patios. Zoning will ensure that the development has adequate parking. And if it makes it harder for businesses nearby to have enough parking, those businesses should figure out how to solve that. This development won’t solve this area’s challenges, but it won’t make them noticeably worse either. A little urban density is a good thing, and when done well, as in this proposal, can enhance an entire neighborhood. I think… Read more »

The “Save Libbie and Grove” movement doesn’t seem as interested in preventing the McMansions from popping up all over the neighborhood, replacing quaint cottages that had been there for decades. I think their real concern is keeping certain people and groups out, as evidenced by Ames Russell’s comment above. Shame!

looks like a good project, I don’t understand what the save libbie and grove people are about. This will be good for the neighborhood, not bad for it.