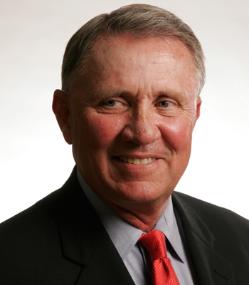 Where other industry observers see Richmond’s ad scene as a hub of creativity, Don Just sees potential yet to be fully realized.

The Brandcenter professor and former CEO of The Martin Agency provided a different perspective of Richmond’s creative community when BizSense talked with him last month, just weeks after his induction into the Virginia Communications Hall of Fame.

A graduate of UVA’s Darden School of Business with an MBA in finance, Just served as president of Bank of Virginia before switching careers and joining up with Martin, which was the bank’s ad agency and recruited him to get its finances in order and in a position for its eventual sale to holding company WPP in 1986. The agency is now part of another holding company, Interpublic Group.

After a stint owning and operating a country inn and restaurant with his wife on North Carolina’s Outer Banks, Just consulted for several agencies and founded his own consulting firm before joining the Brandcenter, where he’s a professor in the creative brand management track.

Just sat down with BizSense to discuss his Hall of Fame induction, what he’s seeing at the Brandcenter and his unique perspective of the Richmond ad scene. Below is an edited transcript:

Richmond BizSense: What was it like getting inducted into the Communications Hall of Fame?
Don Just: There were pluses and minuses. On the minus side, it wasn’t Cooperstown (New York, home of the Baseball Hall of Fame), which as a kid, I’d always aspired to. But it’s a really nice number two to Cooperstown.

When you get a recognition of your peers, I think that’s the most meaningful kind of recognition you can get. It’s not like an outside jury. It was very meaningful to me, and I was very grateful and humbled by it.

RBS: Describe the creative brand management track that you lead at the Brandcenter.
DJ: Our principle objective is to turn out client-side people, either in product management or brand management, merchandising, advertising, communications on the client side – a whole variety of job titles. It’s been a slow start, because the companies that we wanted to introduce our program to were fairly wedded to business schools across the country, and that’s where they limited their recruiting to – MBAs from those schools. Gradually, we’ve built up: 65 percent of our graduates are now client-side graduates in my track, and 35 percent continue to take jobs on the agency side, as strategists, planners, account people. Our objective is that 100 percent, ultimately, of the people within this track will be client-side people. And we’re starting to get some serious traction with companies like IBM, who’s now taken six or eight of our students in the last two years, Apple, Microsoft, Chobani yogurt, Nike – the list goes on.

RBS: How do you approach the creative process and foster that in your students?
DJ: I think that good creative people that I’ve met over my career are also great strategic thinkers. The best brand strategists are also great creative people. The creative directors of major creative shops have proven to be very strategic. Getting young writers and art directors to buy into that premise is difficult, but it’s a fact. Great work begins with great strategy.

That’s a difficult concept for creative people to grasp, because it seems to bear them down under the burden of process, which they don’t like. And I understand that. They have to have a great deal of intellectual freedom in order to do what they do conceptually. But great ideas in communications and brand experience and design are enabled by great strategy; they’re not held back by great strategy. 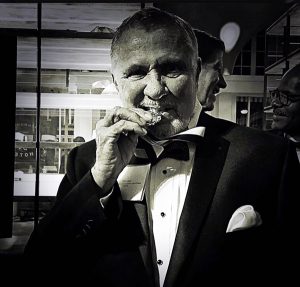 Just at the Communications Hall of Fame induction.

RBS: You brought your financial acumen to The Martin Agency in your 11 years at its helm, but you were also involved in the creative. Did you have to adjust your thinking between finance and creative?
DJ: I didn’t know anything about the workings of an agency, other than through the lens of how they served the bank’s account. I showed up on the scene and there was a lot of skepticism, naturally, in the agency about whether I was going to turn the place into a bank and that sort of thing. While the company at the time was in need of some financial discipline, as is the case with a lot of small businesses, it wasn’t my design to do that.

At the time, creativity in advertising was on the upswing. A lot of new, sort of brash young agencies were emerging: Chiat/Day, Wieden+Kennedy, McKinney & Silver – the list goes on. There were maybe 10 to 15 really up-and-coming agencies that were in great demand, so it was a really high-energy, creative time, and we were a major part of that. It was a great time to be introduced to the business and thrown into the deep end of the pool.

RBS: Are there agencies in town and the work they do for their clients that you think “get it,” or have gotten your attention?
DJ: The fact is that I’m really not too up to speed on the current agency dynamic in Richmond, except to say this: It was always my belief as we were building The Martin Agency that the weight and the gravitas of The Martin Agency in the global advertising context would drag with it the creation of a creative community here – much like Minneapolis, where you had a number of really good creative shops and little shops begin to spawn around them. But in truth, I don’t think that ever really happened. It’s not that agencies didn’t rise, but truly great creative shops did not. It’s one thing to have a successful business, which is fine, based on something other than great creative work, but there just wasn’t the development of a creative community in the way that I thought it would happen.

It’s interesting, because The Martin Agency attracts a lot of people, just by sheer volume, and you would expect people to break off and start shops, and it just really hasn’t happened. It’s not that some shops don’t do better work than others, and occasionally some of them hit a homerun. But just as a general rule, if you ask people across the country to name three good agencies in Richmond, I don’t think they could do it – “good agencies” in the context of outstanding creative work, the kind that would be recognized by Communications Arts or The One Club in New York.

RBS: You hear about a creative community that’s developed in Richmond. Obviously it’s here, but you’re saying it’s not what you thought it would be.
DJ: It’s not at the agency level. There are designers here, there are digital folks here who are knowledgeable about the web and social media people here, artists and so forth. And a lot of that energy is provided by VCU, through outstanding art departments and design, fashion world – that sort of thing. But it hasn’t risen so that there’s an agency that’s been manifest to be in the company of the great creative shops, even embryonically.

RBS: Martin chairman John Adams and Jimmy Ashworth at ndp both said in their interviews for this series the need for a second Martin Agency – not a duplication, but something as big – to help in retaining talent locally.
DJ: You don’t have to be as big. It’s a long haul from (ndp) to get up to The Martin Agency’s size. And the proof over the years has been the (smaller agencies) have been completely recognized for the work that they do. In fact, the opposite is almost true. I think it was (Chiat/Day co-founder) Jay Chiat’s famous quote: “It’ll be interesting to see how big we get before we get bad.” There’s no reason for me to understand why, except for the availability of talent, and/or commitment.