After dodging a foreclosure auction and weeks of negotiations with would-be residents, the developer of a stalled West End condo project has entered Chapter 11 bankruptcy.

Tiber Partners LLC, the embattled ownership group behind the delayed Tiber condos at Libbie and Guthrie avenues, on Wednesday was ordered to enter bankruptcy protection. The ruling comes less than two months after three couples who put down deposits to purchase condos at the stalled development sought to force Tiber Partners into Chapter 7 bankruptcy.

With the consent of Tiber Partners, a trio of future residents asked the bankruptcy court to have the case converted to Chapter 11 in a June 10 filing. Judge Kevin Huennekens granted the request on June 15. David Browne of Spiro & Browne in Richmond is representing the condo owners.

At a hearing June 14, Browne requested the court’s approval of a $6 million bank loan personally guaranteed by Willis Blackwood, one of the condo owners and the founder of Blackwood Development Co., to finance completion of the Tiber. Browne also said in court that Conquest Moncure and Dunn in Richmond would likely be the general contractor if the financing was approved.

Browne declined to comment on the case outside of the court hearings. 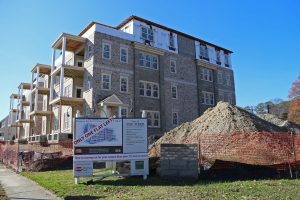 Only some progress has been made since this December 2015 photo.

The court also on Wednesday approved the appointment of a trustee to oversee the Chapter 11 process.

“The current managers of the alleged debtor are committed to the ongoing development of the Tiber project and believe that a successful reorganization can occur,” the court records state.

The three couples who initiated the bankruptcy process filing by making an involuntary bankruptcy petition were Willis and Mary Blackwood, Clemens and Marjorie Bribitzer, and Wilson and Barbara Merchant.

Planned to be delivered to residents in 2015, the project remains unfinished with the delays coming to a head when John K. George & Co. and Tiber’s developers argued in court over completion of the project. While they traded allegations in court, people who put down deposits on the unfinished condos filed liens and lawsuits of their own.

In April, Libbie Guthrie, an LLC controlled by George and David Posner, bought the $6.27 million loan on the Tiber condos from Middleburg Bank, which issued the note in 2013. Libbie Guthrie pushed for a foreclosure auction with the hope of completing the condo project.

The bankruptcy filing put a hold on the foreclosure auction that had been set for April and preserved the assets of Tiber Partners LLC.

Attorney Courtney Paulk of Hirschler Fleischer represents Libbie Guthrie and could not be reached for comment.

Lynn Tavenner and Paula Beran of law firm Tavenner & Beran represent Tiber Partners and could not be reached for comment.