A 2-year-old company in Innsbrook is starting the summer with some extra cash in its coffers.

West Creek Financial, a consumer finance company, recently finalized a $3.5 million capital raise, according to an SEC filing on June 6. 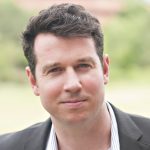 The company confirmed the raise and said in a prepared statement that the funds came from institutional and angel investors. It said money will be used for operational purposes and business development.

It was founded in June 2014 by Boomer Muth and two unnamed partners. Muth, the company’s CEO, declined to comment beyond the prepared statement.