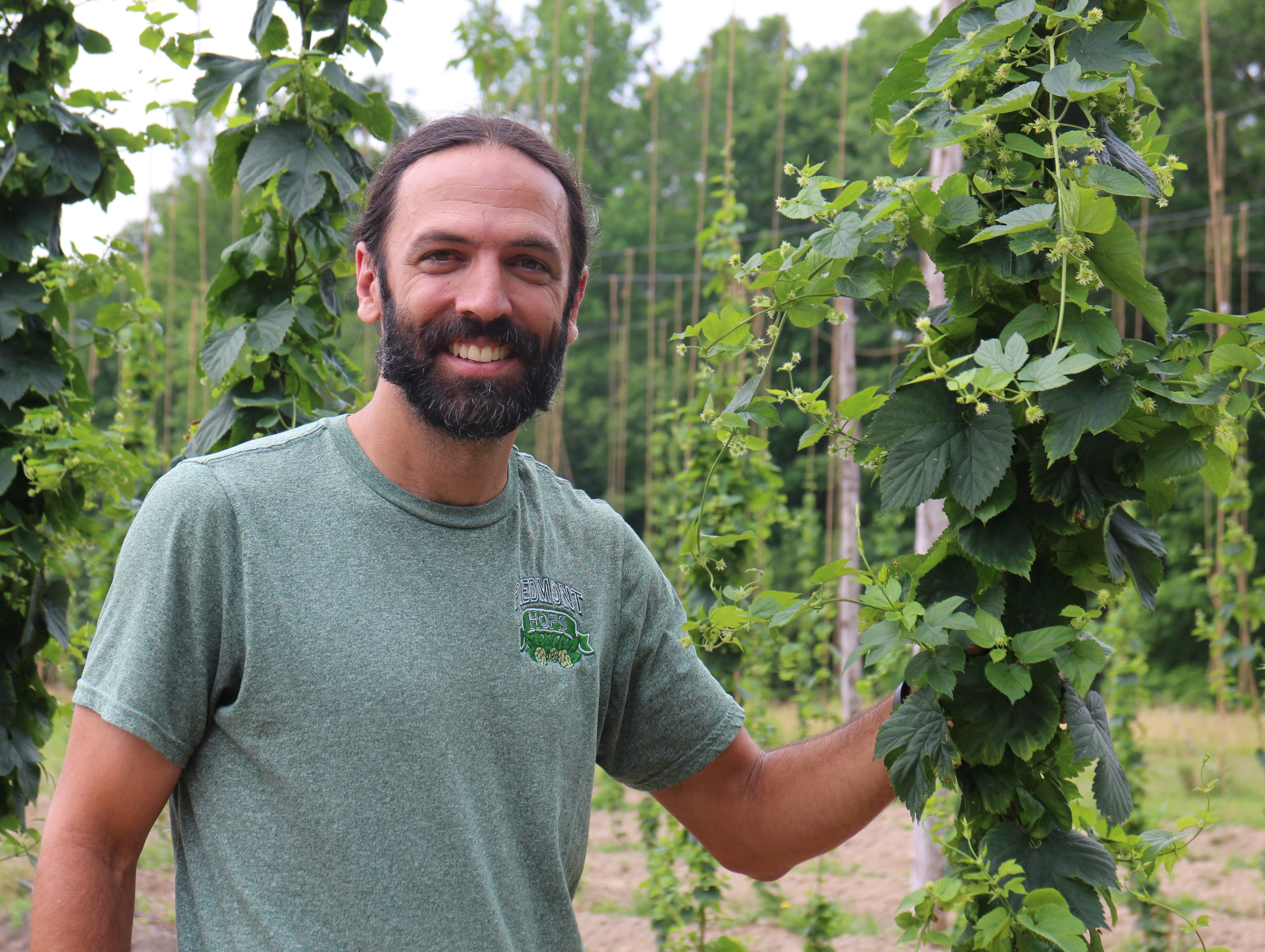 David Goode has been growing Piedmont Hops’ Virginia operation for about three years at his Chesterfield County farm.

Tucked away from the meandering sprawl that has consumed chunks of Chesterfield County’s countryside lies a reminder that Richmond’s brewery scene is far from slowing down.

Piedmont Hops, which produces hops from a third of an acre along Genito Road, has nearly doubled its number of plants since launching in 2013 and is planting the seeds for more growth, in line with the continued statewide growth of the craft beer industry.

“We’re not a very big operation, and I don’t want it to ever be a super large operation,” co-founder David Goode said in a recent interview at his family’s century-old farm, where the hops operation shares its countryside plot with rows of blueberry bushes and a couple greenhouses at the Swift Creek Berry Farm.

“But we are gradually growing our operation to accommodate more local brewery orders.”

Goode, who co-founded the company with Steve Brown of Chapel Hill, North Carolina, said they have increased from roughly 240 plants initially to around 400 plants today.

Even before the buds begin to sprout, many of the hop yields are already spoken for by regional brewers. On average, Goode said many of the brewers will purchase about 60 to 70 of Piedmont’s hops buds, which goes into hundreds of bottles of craft beers.

“It really depends on the brewer,” Goode said. “We work with multiple smaller brewers, which we choose to do. There are some growers that work with just one brewer.”

Hop ingredients give beers a distinct flavor and bitterness – depending on the type of hop plants cultivated for brews. Hop plants are natural climbers – with vines growing up ropes to heights of 20 feet. During peak season, Goode said, the plants can grow up to eight inches in 24 hours.

The end product is a late summer harvest of hundreds of heads of burrs that become a key ingredient for some of the region’s most sought-after seasonal craft beers.

A key to Piedmont’s growth, Goode said, has been appealing to brewers that specialize in seasonal and niche beers.

“We’ve always been a hops provider for seasonal beers because our operation doesn’t yield a lot of hops,” Goode said. “It’s been a good model for us and has helped us become more strategic about the next steps of the business.”

In the coming months, Goode said he plans to add 200 to 300 plants on another third-of-an-acre site already tilled in front of his current hops operation.

Goode said he hopes the future field will yield an additional 200 to 400 pounds of hops – allowing Piedmont to keep up with client demand, and add a few more breweries to its client list along the way.

“This has always been about maintaining what we had and adding smaller users along the way,” Goode said. “The worst email to send is to say, ‘Hey, we don’t have any extra hops.'”

Closer to home, Piedmont Hops provides its locally grown hops to Hardywood Park Craft Brewery, which uses the harvest in its RVA IPA – an India pale ale available only in early fall.

Trapezium Brewing Co., which recently opened its operation and tasting room in Petersburg, has also inquired about using Piedmont’s hops in some of its brews, Goode said.

Bigger brewers are also taking note of the smaller operation.

Stone Brewing, which now operates its East Coast brewing operation and taste room in Richmond’s Fulton section, reached out to Piedmont Hops and other members of the Old Dominion Hops Co-Op.

“They were looking to brew a Virginia beer with Virginia ingredients,” Goode said of Stone.

The Old Dominion Hops Co-Op is a consortium of hop farmers from mostly Virginia, Maryland and North Carolina that work together to share information about hops production. At times, the group also shares hops amongst each other to fill large orders.

Given the craft beer industry’s exponential growth over the years, Goode said there is plenty of business to go around among hops growers. While the bulk of the state’s hops providers are clustered in the Charlottesville region, Piedmont Hops is joined locally by Huguenot Hops in Midlothian and Powhatan-based Shadow Lawn Farm.

He said the few hops producers in metro Richmond work together to meet demands of area craft brewers.

“We have picking parties to harvest the hops… where we’ll have some friends come out and help us pick the hops,” Goode said. “At times we’ll use Huguenot’s harvester for picking out the hops.”

Keeping Piedmont Hops’ operation small has been key to Goode and Brown’s business – allowing the firm to gradually add new clients that it can fully service.

“On average, it could cost about $10,000 an acre to do hops,” Goode said. “When we started, it cost us about $750 out of pocket, which kept our costs down considerably, but it also let us grow at our own pace.”

With the next set of hops rows platted and planted, Goode contemplated an even healthier brewery scene across the region, which now boasts more than a dozen breweries open or in the works.

“There really is a lot of activity and it’s all healthy,” he said. “We hope to keep all of our customers happy as long as it continues.”