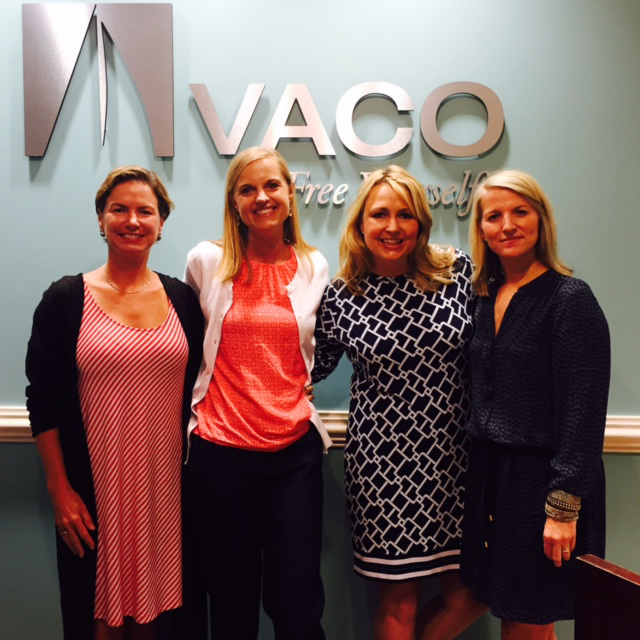 Note: This story has been revised from its original version. Changes made include correcting the order of the names in the photo caption, which previously misidentified two of the women shown.

A Tennessee staffing company has added to its presence in Richmond with the acquisition of a local firm.

The founding partners of Momentum Resources this month sold their firm to Vaco, a Nashville-based agency with 30 offices nationwide. Momentum’s operations and clients will fold into Vaco’s Richmond office at 3901 Westerre Parkway in Henrico County.

Tanya Cummings and Whitney Forstner founded Momentum nine years ago to match mothers who wanted to reenter the workforce with employers needing part-time employees. As part of the acquisition terms, Cummings and Forstner will join Vaco as consultants. Financial terms of the sale were not disclosed.

“From a growth cycle, Momentum had been a baby for nine years,” Cummings said. “We believed in what we were doing but we were ready for a change.”

“When they started, they had a true mission in connecting intelligent, working mothers into flexible positions,” Miller said.”Through this acquisition, we hope to continue that mission.”

The company added that the deal was also driven by what it sees as a workplace trend towards “enhanced flexibility, due in large part to the increasing number of Millennials entering the workforce and the rise in working mothers.”

Momentum’s headquarters was located at 506 Libbie Ave. It also opened an office in Northern Virginia in 2008 that later closed. Cummings said Momentum provided staffing in both Richmond and the Washington, D.C., metro area. She said Momentum helped staff Fortune 500 companies based in Richmond, as well as startups.

Cummings said employees who signed on with Momentum were seeking between 20 and 40 hours of work per week. While initially targeted at mothers attempting to reenter the workplace, the firm eventually grew to service other groups seeking flexible jobs.

Vaco’s Richmond office employs 25 people. At its height, Cummings said Momentum had 10 employees, adding that the company had been recently downsizing. No previous Momentum employees were hired as part of the acquisition, although Cummings said Forstner and she have been working to place them.