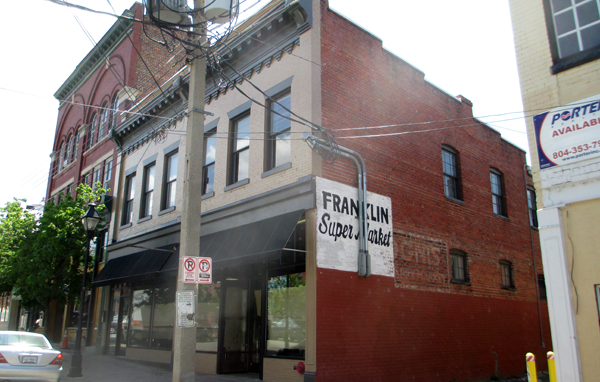 Picking up where a shuttered neighborhood market left off, a new restaurant is looking to add more flavor to Shockoe Bottom.

Sauce & Toss is set to open in the 3,600-square-foot space at 1711 E. Franklin St. The storefront was previously occupied by the Franklin Street Market, which closed last month after opening in April 2014.

Min Kim, who co-owns Sauce & Toss with his father, Young Kim, said they hope to open the eatery in the next two months.

Min said his family is investing about $100,000 to design and renovate the space. Scott Henry, who manages the building, which includes four apartments, helped coordinate the lease earlier this month.

The restaurant was originally supposed to be called Shark Bucket. However, the Kims changed the name to align more with the restaurant’s concept.

Min describes Sauce & Toss as a seafood and chicken restaurant. He said rather than offer set menu items, the restaurant would allow customers to customize their orders.

“Our most popular items will be the seafood boils prepared in homemade garlic-lemon sauce,” Min said. “The fried chicken with a crispy skin or tossed in any one of our flavoring sauces would be the next contender.”

The Kim family is no stranger to the Richmond food scene.

Min said his family owned the New Fish Market at 202 E. Broad St. for 15 to 20 years. The family also owned and operated the Shark Seafood Restaurant at 6581 Iron Bridge Road in Chesterfield for about two years before closing it this summer to bring a similar concept to Shockoe Bottom.

In an effort to keep overhead costs low and recipes close to the vest, Min said the business will initially employ family members.

“Expansion is subject to change,” Min said of additional hiring.

He said the decision to open Sauce & Toss in Shockoe Bottom was simple – its variety of restaurant offerings, tourism draw and continued residential and commercial growth in the area.

“Because of the diversity of the inhabitants,” Min said. “We would love to add on to the variety of unique restaurants and local food spots.”