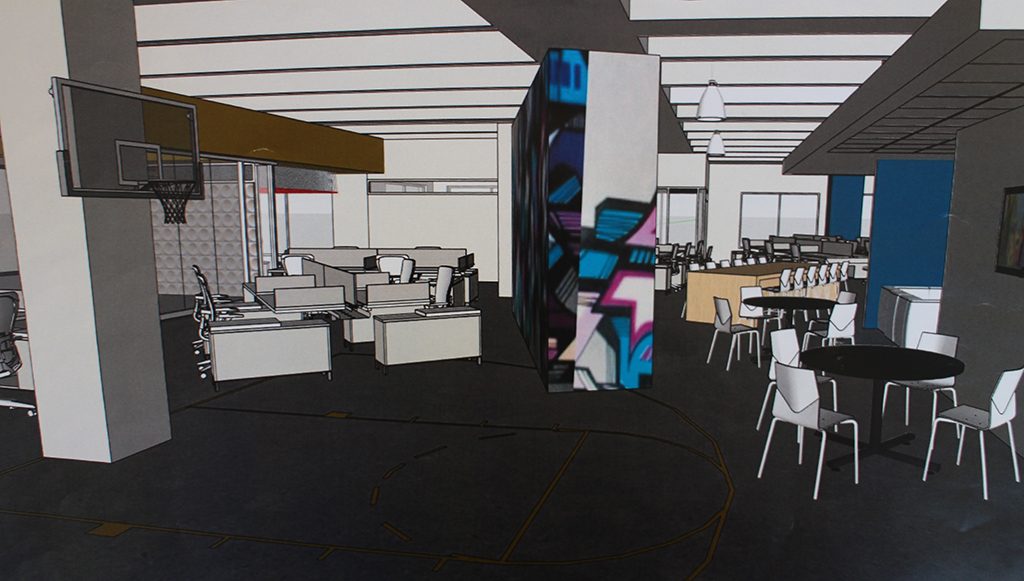 A rendering shows plans for a basketball hoop and key in the office.

A half-court basketball hoop, video game arcade and golf simulator are just some of the amenities coming soon to a downtown tech office. 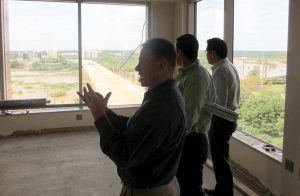 AvePoint Inc. is closing in on the completion of its Silicon Valley-inspired Richmond space taking shape in Riverfront Plaza. The New Jersey-based firm chose the city over Atlanta, Philadelphia and Newark, New Jersey, as announced in a press conference with local and state politicians late January.

The software developer, which specializes in Microsoft Cloud services and data mining, has some limits on amenities, though.

“They keep suggesting a nap pod,” Alex Gasper, the company’s pointman in Richmond, said of AvePoint’s Richmond employees. “It may have to be one or the other between the nap pod and a golf simulator.”

AvePoint has 15 employees working in a 3,000-square-foot office on Riverfront Plaza West’s 15th floor. The firm will vacate that space for 12,000 square feet on the tower’s ninth floor, with a move-in date and mass hirings expected in October.

A rendering shows plans to organize wires and cables into wall art.

AvePoint already is having fun in its temporary office eight floors above. The company holds a yoga session every Tuesday, and has video games and a basketball hoop in a lounge that appeal to its young workforce. The company said the median age at the Richmond office is around 25, and it expects to hire several recent college graduates when it begins staffing increases, including from VCU.

Lin said 30 percent of the new office will be reserved as “fun space,” and the same ratio will apply if AvePoint expands here in the future. AvePoint has the first right of refusal to lease the rest of the 30,000-square-foot floor.