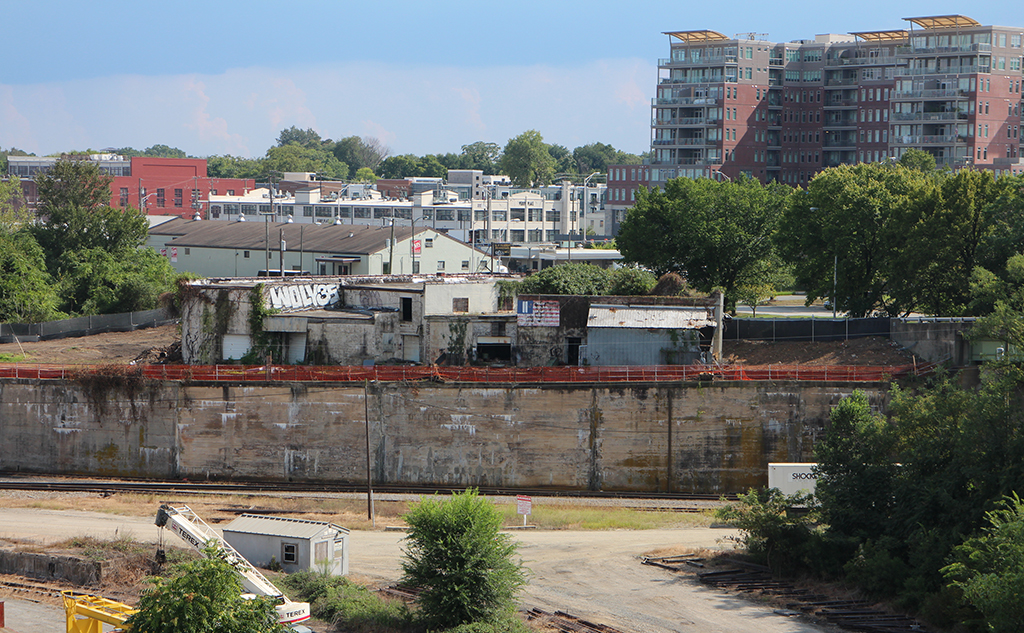 The path is clearing for a dozen new townhomes that will add homeownership options in rental-heavy Manchester. 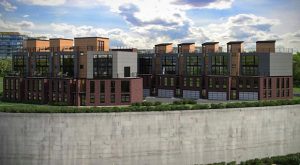 Crews last week took down the first of several buildings on the site of the future 7west development, a cluster of modern-design townhomes planned at the foot of the Manchester Bridge. The main building, which once housed S.T. Perry Paint Co., is slated to be demolished later this month.

Developer Jeremy Connell, whose projects have included the Manchester Pie Factory building, closed on the half-acre property at 501 W. Seventh St. in June. He purchased it through Trailhead Development LLC for $925,000.

Connell said construction is slated to start in mid-September, with the first units to be ready next spring and the rest of the $6 million project completed around this time next year. Two of the units have been pre-sold, said Patrick Sullivan of One South Realty Group, which is marketing the project.

Hunnicutt Construction is the general contractor and is doing the demolition. The architect is Mario DiMarco, who is an investor on the project along with Connell. Village Bank is providing financing for land acquisition, site development and construction.

The three-story townhomes, each spanning about 3,150 square feet of finished living space, will include two-car garages, rooftop patios and retractable storefront-style glass doors that open up to third-story balconies. Each unit will consist of at least three bedrooms and three bathrooms and include an option for an elevator.

Sullivan said the new buildings will include materials salvaged from the S.T. Perry Paint Co. building, where selective demolition has begun inside. Known to some locals as Eggspace, the building once housed an art gallery and studio space used by Ed Trask and other local artists. It also served as an occasional concert venue for local rock bands.

The townhomes will join hundreds of other residential units – apartments primarily – that have added to Manchester’s building boom in recent years. The 150-unit Terraces at Manchester wrapped up last year on the other side of Semmes Avenue. A conversion of the Plant 1 building at 403 Stockton St. will add more apartments, and the initial phase of Reynolds South, a 17-acre mixed-use project, also is underway.

Ten years from now, 7West will seem as insignificant to the Manchester skyline as Property Results first warehouse conversion at 201 Hull Street. But there’s nothing insignificant about it today. This is a bold play on Connell’s part and another important step in the evolution of Manchester and the city as a whole. Home ownership is key to the future success of Richmond economically and we are all pulling for 7West to find its buyers.

Very well said. Skyline views are amazing and anyone moving into area from NOVA (or loves the outdoor lifestyle offered out their back door) will see thes as an amazing lifestyle/investment buy). Perfect timing with approved bridge project, and more focus on the area for mixed-use projects. Congratulations to all of the visionaries who are risking and improving our area with great designs and additions to the city and surrounding counties. It’s evident with all the national ‘lists’ we’re making lately- Richmond, VA truly is a hidden gem being uncovered a block at a time by some smart developers and… Read more »

Jeremy,
Very excited for you. Congratulations on your progress and continued success in the future!

This projects hit the nail on the head!. Congrats Patrick and Jeremy. Love to see it

I sure wish some of these developers would look into building affordable townhouses which don’t require potential buyers to be millionaires. My wife and I are soon to be empty nesters and have been contemplating moving from the suburbs back into the city. Unfortunately, many of the city projects we encounter whether townhouses or condos are priced to exceed $400,000 or more. Granted, these pricey options offer very cool amenities and features, but, unfortunately, they’re simply priced too far out of the range of similar couples and individuals such as ourselves. We really don’t want to continue looking at the… Read more »