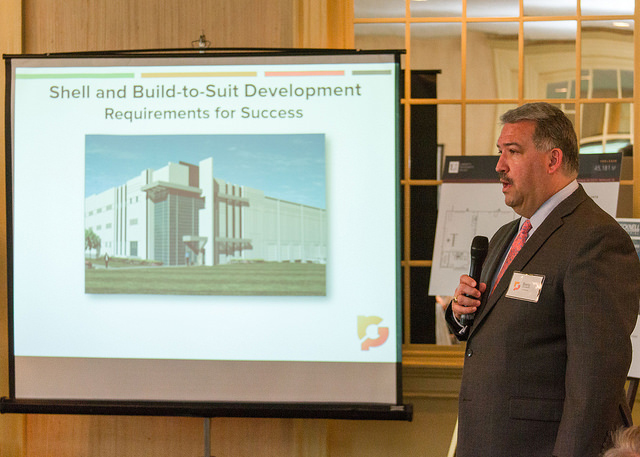 Barry Matherly, president of the Greater Richmond Partnership, speaking at the organization’s Investor Forum in May.

Lured with the help of money from the state and county, a California bottling company is pouring into a Chesterfield technology park.

Niagara Bottling plans to invest $95 million to build a 557,000-square-foot manufacturing and bottling operation on 48 acres at 1700 Digital Drive in the Meadowville Technology Park in Chesterfield County.

The announcement, made Tuesday by the county economic development authority, the governor’s office and others, is the culmination of an effort previously codenamed Project Buzzard.

The company will initially hire 76 workers who will make an average of $50,000 a year to make bottles and bottle caps to be filled with purified water and distributed from the Chesterfield site. 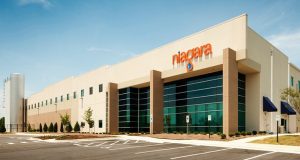 A rendering of the proposed site at 1700 Digital Drive in the Meadowville Technology Park. (Courtesy Niagra)

Plans for a second phase call for another $50 million in construction and the hiring of another 50 employees. That piece is still being finalized, according to Garrett Hart, director of the county EDA.

In exchange for Niagara’s investment, the company will eventually get a $500,000 grant approved by Gov. Terry McAuliffe from the Commonwealth’s Opportunity Fund. The governor’s office said Virginia beat out Maryland to attract Niagara.

The county is also giving the company a $1.2 million grant to aid in construction, Hart said.

The land for the facility is currently owned by the county EDA and will be sold to Niagara for $4.2 million in a deal expected to close today, Hart said.

Hart said the deal to bring Niagara to Chesterfield took more than two years and got underway when the company’s real estate broker, Thomas Turner of Hart Industrial Group, reached out to him. Hart had known Niagara’s director of economic development, Derieth Sutton, for about 10 years.

The Greater Richmond Partnership, which along with the Virginia Economic Development Partnership and brokerage Newmark Grubb Knight Frank was also involved in the efforts to land Niagara, said its president and CEO Barry Matherly has been in talks with Sutton since 2012.

Twelve sites in Richmond were considered by Niagara before the Meadowville site was chosen.

Matherly and Hart visited in April a Niagara facility in California that will act as a prototype for the Chesterfield site. Choate Construction will build the Meadowville facility, which is expected to be operational by March. R. Alan Lewis of the Keith Corp. is the property’s developer. 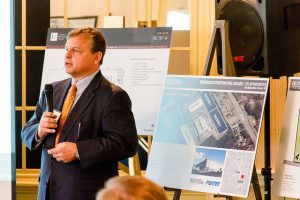 Alan Lewis of The Keith Corporation, the project’s developer.

Site work began two weeks ago after a wetlands permits approval by the Virginia Department of Environmental Quality. Chesterfield EDA had originally applied for the permits under the guise of the codename Project Niagara before withdrawing that application and submitting a revised application renamed Project Buzzard. During that time, Chesterfield EDA was working on attracting another company that didn’t come to fruition, Hart said.

Niagara is said to be the largest private label bottled water supplier in the U.S. and supplies major retailers across the nation. The family-owned company started in 1963 selling five-gallon containers for homes and offices. It expanded in the 1990s to offer single-serve private label bottle water for grocery, clubs, convenience and wholesale customers.

“It puts everyone on notice that it’s a good location,” he said.