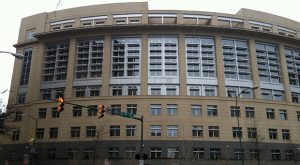 The cases against Vaughn, Robertson and Cavalier Union are playing out in Richmond federal court.

The partner of a former U.Va. and NFL football player facing civil and criminal charges for defrauding dozens of investors pleaded guilty on Friday for his role in the alleged scheme, according to the U.S. Attorney’s Office.

The U.S. Attorney’s Offices states that between 2009 and 2016, Vaughn, 45, took part in an alleged scheme with his partner Merrill Robertson Jr. that caused more than 50 investors to lose a total of $9 million.

The case claims Robertson and Vaughn falsely led clients to believe they were experienced investment advisers and promised specific rates of return and bogus account statements.

“Vaughn represented that he was a long-time investor and philanthropist with extensive experience in business and real estate,” the U.S. Attorney’s Office said in a statement. “In fact, Vaughn filed for personal bankruptcy four times, including twice during the time he was soliciting investors for Cavalier.”

The U.S. Attorney’s Office claims they misled investors about how their money was being used, investors were never informed of commissions and fees “or that their money would be used for personal expenses, charitable giving or to repay other investors.”

It claims much of the money was spent on personal living expenses, “including mortgage and car payments, school tuitions, spa visits, restaurants, department stores, and vacations.”

Vaughn’s criminal case follows Robertson’s arrest on Aug. 10 and a civil lawsuit filed by the SEC that same day that claimed they ran a “Ponzi-like scheme using money from new investors to pay back old investors and finace their luxurious personal lifestyles.”

Robertson, 36, played football for UVA and the Philadelphia Eagles in the early 2000s. The SEC suit claims Robertson used his contacts from Fork Union, U.Va. and the NFL to scout potential investors. It claims they targeted senior citizens and former football coaches, donors, alumni and employees from schools Robertson had attended.

The SEC complaint says Vaughn and Robertson claimed they were investing in money in restaurants, real estate, alternative energy, assisted living facilities and a supposed water company called Drops. The few legitimate investments they made included Game Day Pizza and Sweet Frog locations, which failed in 2014.

Criminal charges were not initially filed against Vaughn in August. His criminal case was filed Sept. 14, via criminal information, which does not require an arrest or a grand jury indictment and typically involves cooperation from the defendant.

Vaughn’s criminal case calls for him to forfeit at least $9 million in proceeds from his actions. He is set to be sentenced on Dec. 14.

When will people learn? Investigate anyone who claims that they will earn you double digits returns on your money, cash on cash. Get the background on them. In almost every case, you’ll decline the investment. They cannot deliver.