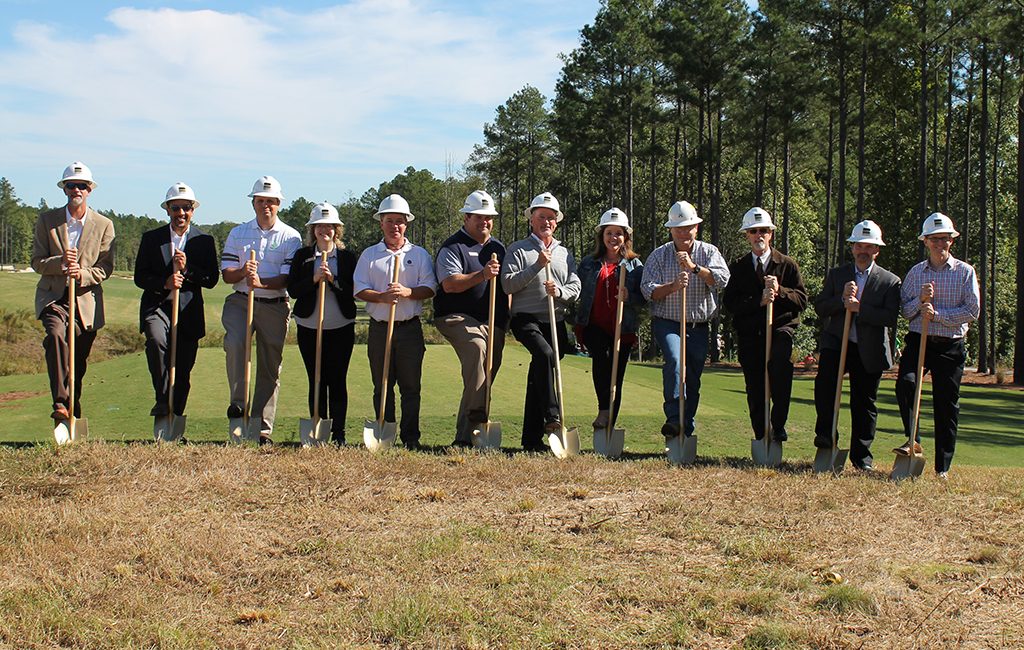 The developers of Magnolia Green held groundbreakings on Tuesday for more than $10 million of construction. (Courtesy iStar)

A year after capping off its golf course centerpiece, a massive Chesterfield development is ready to put its next big pieces into play.

The developers of Magnolia Green held dual ceremonial groundbreakings on Tuesday for more than $10 million of construction for a new golf clubhouse and aquatic center.

The two-story, $5 million clubhouse will be built near the 9th and 10th holes of the neighborhood’s Magnolia Green Golf Club, which was made whole last year when its owner completed its second nine holes after the recession left it half-built.

The clubhouse will have 15,000 square feet with front and rear porches, indoor and outdoor dining areas and event space for up to 180 guests. Because the golf course is semi-private, the new facility will be open to members and the general public, in an effort to drive revenue from corporate functions and weddings.

Tom Page, vice president of iStar, the New York REIT behind the development of Magnolia Green, said construction on the clubhouse will begin this month and the plan is to have it completed next September. 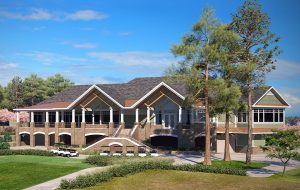 The clubhouse will have 15,000 square feet with front and rear porches, indoor and outdoor dining areas and event space for up to 180 guests. (Courtesy iStar)

“The final piece of the puzzle is the clubhouse,” Page said, adding that the Magnolia Green course averages about 3,500 golf rounds during the peak season. “I think that will really help us ramp up memberships.”

Construction has already begun on the $5.6 million aquatic center that will take shape on 10 acres within the 1,900-acre development. It will feature an eight-lane, Junior Olympic-sized competition pool, water slides, water cannons and other amenities. Work is expected to be completed by July.

Branch Associates is the general contractor on the clubhouse construction. iStar is serving as the GC for the pool facility, with L2 Construction Services doing site work. Page said it will soon bid out the work for the construction of the pools and buildings around the aquatic center.

iStar is financing all of the work out of pocket, Page said.

The clubhouse and pool facility make up $10 million of about $123 million worth of development that iStar has planned to bring the community to completion, Page said.

Magnolia Green is zoned for 3,500 residences, and Page projects it will be around 3,000 when all is said and done.

Page said iStar has 14 lots left to sell to complete the development’s 680-lot first phase. Site work and lot sales have already begun on Phase 2, where 900 lots will eventually be carved out. Builders are signing on to construct everything from townhomes to age-restricted sections and higher-end custom homes. A third and final phase will follow.

Conceptual work has also been done for an apartment phase, but Page said iStar will wait a year or so before moving forward with it. The plan is to eventually have about 500 apartments.

“We think it will be a little early for that project,” he said.

iStar’s long-term plan for Magnolia Green also calls for a phase of commercial space fronting Hull Street, but Page said that’s still on the drawing board.

iStar took over Magnolia Green from its original developer in 2009, after the project had stalled and the 260-acre golf course was only half-finished.

MG is responsible for widening Woolridge Road to 4 lanes from Otterdale Rd to the causeway. When does that work commence? I see that Rountree has cleared for a 2 lane section connecting the existing Woolridge Rd all the way to Old Hundred Rd.