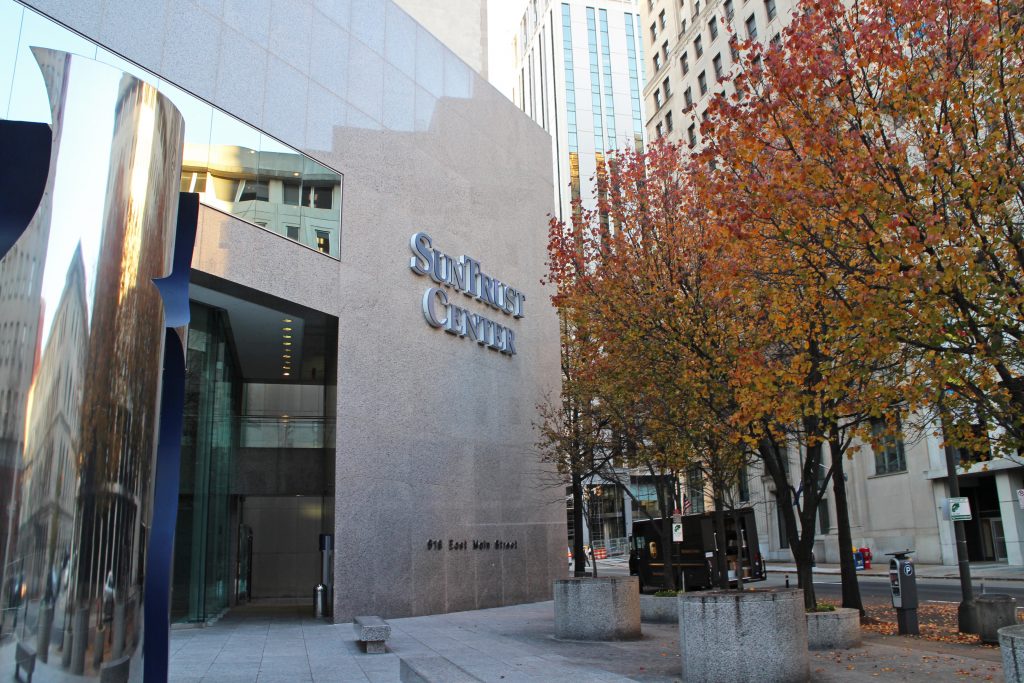 Less than a year after announcing its plans to anchor a new tower planned near the downtown riverfront, one of Richmond’s biggest employers has decided to stay put.

SunTrust announced yesterday it has canceled its plans to occupy 53,000 square feet and move 200 employees to a conceived tower called the Locks at 3Twenty-One at 10th and East Byrd Streets. Instead the banking giant will keep its workers at its current home at the building named for the company at 919 E. Main St., the SunTrust Center.

“We are pleased to have reached an agreement to remain in downtown in updated offices at our current headquarters building,” John Stallings, Virginia division president for SunTrust, said in a news release. “Our prominent signs atop the building and our branch will remain in their current locations. Extensive renovations of our existing space are planned to update and modernize our facilities.”

SunTrust’s current lease at 919 E. Main St. was set to expire in 2017, according to the release. Now, the bank has struck a new lease with SunTrust Center owner Parmenter to lease 75,000 square feet at the building through sometime in 2028.

The downtown deal does not change SunTrust’s plans to consolidate its three suburban offices to the 210,000-square-foot Westmark I building at 11011 W. Broad St.

With SunTrust backing out, the future of the proposed 21-story, $93 million Locks at 3Twenty-One is now up in the air.

Plans had called for developer Dominion Realty Partners to acquire the land at 321 S. 10th St. from current owners Fountainhead Properties and the WVS Cos., and the parties had been under contract.

“The contract is expired, but we’re working with them to extend it,” Fountainhead’s Rick Gregory said of talks with Dominion Realty. “They’re still very much interested.”

Michael Campbell of Dominion Realty did not respond to requests for comments.

Regardless of Dominion Realty’s plans, Tom Papa of Fountainhead said he’s sure that the land won’t go unused.

“If they don’t put something there, we will,” Papa said, adding he is willing to wait to see what Dominion’s next move will be. “Some other tenant could come along in a nanosecond and make it so that the building comes up. There’s more than SunTrust out in the world.”

A SunTrust spokesperson said the company wouldn’t comment beyond its press release.

Commonwealth Commercial handles leasing at the SunTrust Center, where about 120,000 square feet is available for lease, according to the news release.

I hope they still build the 3Twenty One building as planned it would be a beautiful addition to the skyline right on the river and bring more business, residential, commercial and retail to the Canal Walk area near Brown’s Island. After that is completed they need to figure out what to do in the old Reynolds plant on the other side of the locks and restore the canal to meet the CarMax side with the Brown Island side of the canal to allow the canal boats to come all the way to Brown’s Island.

It would be awesome for them to connect the two canals but the two bodies of water appear to be at severely different elevations, coinciding with their past lives as commercially viable canal segments. Michael Campbell has a track record of getting deals done and I won’t put this one in the trash quite yet. Richmond has become a viable re-location for big DC firms and he may land one of them.