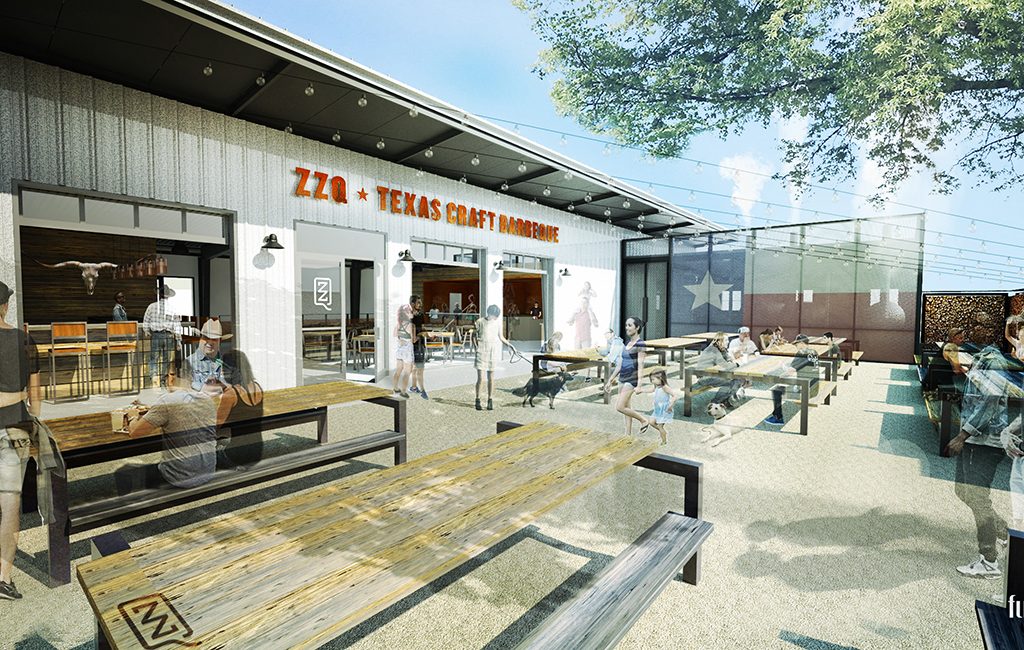 A rendering of the planned ZZQ courtyard. (Courtesy ZZQ)

There will soon be some extra smoke piping through one of Richmond’s hottest neighborhoods.

ZZQ, a barbecue venture run by local architects Chris Fultz and Alex Graf, has plans in the works for a new restaurant to be constructed from scratch at 3201 W. Moore St. in Scott’s Addition.

The building will take shape on a now-dormant site previously used by ETEC Mechanical and next door to Ardent Craft Ales, the brewery where Graf and Fultz have been serving their meats and sides every Saturday for the last year.

They’re close to inking the lease for the site, which will see its current building demolished to make way for a 3,200-square-foot restaurant, 2,500-square-foot patio and 1,000-square-foot smokehouse that can hold three smokers.

The shell of the restaurant will be a pre-fab metal building, giving it the feel of a Texas-style barbecue shack, but with an architect’s modernist-industrial touch.

“It fits perfectly with our Texas barbecue thing,” said Fultz, who was born in central Texas and grew up in Mesquite, near Dallas.

Going full-on into a standalone restaurant is the culmination of a process that – not unlike how Fultz and Graf cook their brisket – has been a slow, methodical set of steps with an eye on never biting off more than they could chew.

After coming to Virginia about 20 years ago for grad school at UVA and a career in architecture, Fultz’s Texas roots drew him into experimenting with smoking his own meats beginning 15 years ago.

“The inspiration came from me not being able to find a good brisket on the East Coast,” he said. 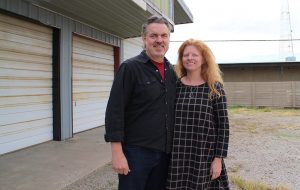 He began smoking for himself and his friends, eventually building up the courage to serve his brisket at parties, before eventually expanding up to catering.

He met Graf, a Virginia Tech grad who grew up in Virginia Beach, about five years ago. She helped Fultz perfect the sides to go with the meats, which then allowed them scale up another notch to the twice-a-month and then weekly set-up at Ardent.

Once they started seeing the hungry crowds that showed up at Ardent and that regulars were returning for the food as much as the beer, that gave them the confidence to go big.

“We had long lines every Friday night and sold out in two hours,” he said. “There’s a market for it.”

With the help of outside investors, ZZQ will put several hundred thousand dollars into the new restaurant, Fultz said.

Trent Construction will handle the project, with ETEC doing mechanical and plumbing work.

Finding a good relationship with a landlord in the heated real estate market of Scott’s Addition was vital, Graf said.

“It really matters who we get in bed with,” she said.

The space, naturally, is being designed by Fultz, Graf and Amrit Singh, who work together at Fultz & Singh Architects, which keeps its office a few blocks away on Leigh Street.

Demolition will start in January, and they’re aiming for a mid-April opening at the earliest, though that may extend to May.

“We know how these things go, as architects,” Fultz said.

Fultz and Graf’s challenge as first-time restaurateurs will be balancing time between running ZZQ and the architecture firm. Fultz said he presently spends about 75 percent of his time on architecture and the rest on barbecue.

“That will swing to 80/20” in the other direction, he said, adding that Graf will work full time at the restaurant.

To further hedge their bet, Fultz worked at a BBQ joint in Charleston for four days earlier this year to get a feel for the inner mechanisms of such a restaurant. They’ve also hired Russell Cook, formerly of Millie’s and Balliceux, to help them on an interim basis to get the restaurant off the ground and running smoothly.

The new operation will allow ZZQ to expand its menu – particularly to add new meats and desserts.

It’ll serve food in a traditional Texas-style serving line where patrons order meat by the pound on brown butcher paper on trays. It’s a style that Graf said took Richmonders some getting used to.

“When we started serving by the pound, I had someone tell me ‘Richmond will not accept this,’” Graf said. “It took people a while to get it, but they get it now.”

As for the name ZZQ, it’s a tribute to the food’s Texas roots and reference to one of the Lonestar State’s other best known exports – rock band ZZ Top.

Raise your hand if ten years ago you looked at Scott’s Addition and saw a real estate and food/brewery promised land. Okay, Justin French is raising his hand but no one can see him.

The transformation is amazing but you know something? It’s just starting.

I stood in long lines at Ardent and it was worth every minute. These folks can bring it. Best of luck with the construction and I look forward to the opening next spring!

Congratulations to Chris and Alex–this couldn’t have happened to two more deserving, talented and hard-working people!

They’re right… no good Texas-style brisket here. I did not know about Chris’ offerings at Ardent. Guess I’m going to get in line, and look forward to the new restaurant.

Best of luck, Chris and Alex. And thanks for bringing the brisket!