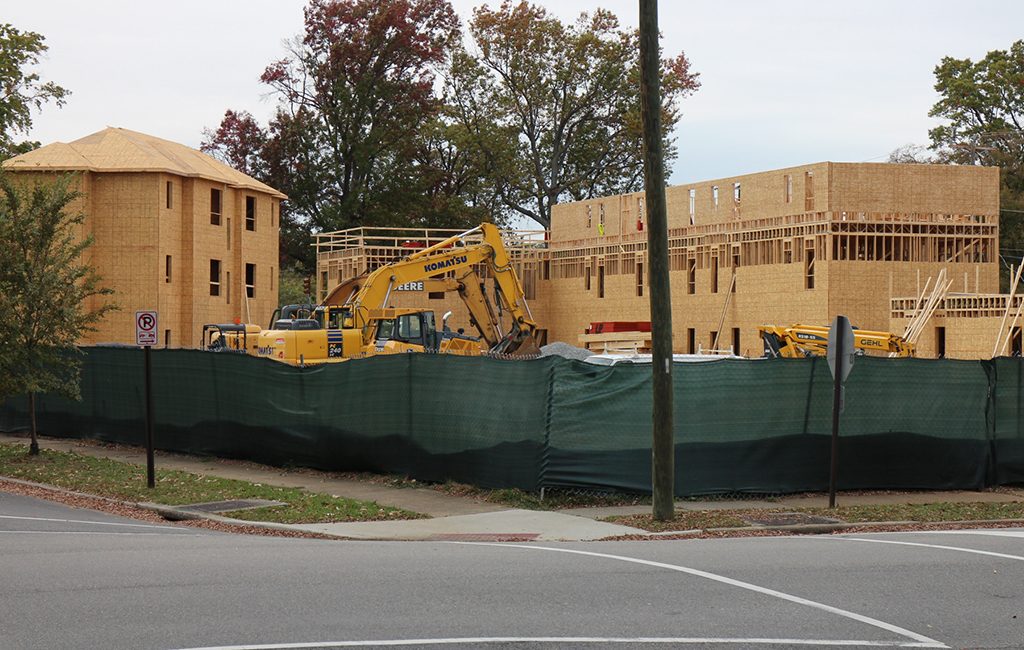 Developers are several months into construction of Carytown Crossing at North Thompson Street and Patterson and Kensington avenues. (Jonathan Spiers)

After sitting on the property while it waited out the recession, a local developer is moving forward with construction of new apartments on a block in the Museum District between two of its other properties.

Oliver Properties is several months into construction of Carytown Crossing, a 50-unit apartment complex at the crossroads of North Thompson Street and Patterson and Kensington avenues. The four three-story buildings, along with a leasing office, will fill the city block bordered by those streets and North Nansemond Street, just east of Interstate 195.

The property is the 10th in metro Richmond for Oliver Properties, which purchased the 1.3-acre site in 2007 for $1.55 million. At the time, it planned to demolish the medical office building that previously filled the site, but the economic downturn put those plans on hold, said president and CEO Justin Oliver. 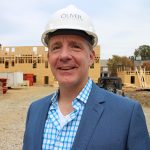 “We ran this as a medical office building for seven years. We really got to know the property in its transitional, commercial capacity,” he said. “We weren’t medical landlords at all, but we learned a lot about it.”

The company for years had been eyeing the site, which is between two of its other properties: the 106-unit Kensington Place, which it purchased upon its arrival in Richmond in 1984, and the smaller Patterson Place apartments on the opposite side of the site.

Oliver said the opportunity to develop a full block was appealing to the company, and a rarity in the largely built-out historic district.

“It was really in our front yard, or back yard, depending on how you look at it,” he said. “It’s not a typical square or rectangular city block. This one’s more of a pork chop, because of the way Kensington Avenue cuts across.

“Because it’s a whole city block, we get to create this wonderful streetscape, and we wanted to bring the buildings closer to the sidewalks like you would see more typically in the Fan and Museum District,” he said. 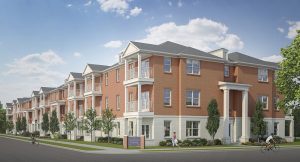 The apartments will include 39 two-bedroom, two-bathroom units and 11 one-bedrooms. (Rendering courtesy Oliver Properties)

The buildings are designed to be consistent with surrounding architecture, and Oliver said the company worked with neighbors and the Museum District Association to address concerns. One suggestion to come out of those discussions was the addition of street-facing doors for pedestrian access, where the buildings were originally designed with access only from an internal parking area that the buildings surround.

“We’ve been in the neighborhood a long time; we plan to be here a long time. We want to try to be good neighbors,” Oliver said. “We really valued their input and were able to address their concerns, things we agreed with.”

Monthly rents have yet to be set, but Oliver said the two-bedroom units would likely go for around $1,500, while the one-bedrooms would rent around $1,100. Rents would include off-street parking, which Oliver said is situated between the buildings to obscure it from the street.

Oliver said leasing will start in January, with the first building completed by February and the entire project completed by July. He said the company has received interest from 39 parties. Tenants will be moved in starting in May. 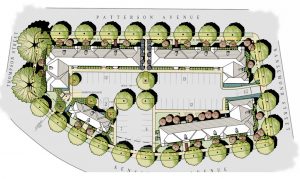 Oliver put the total cost for development at $10 million. Village Bank, based in Midlothian, is providing financing, and Glen Allen-based Capstone is the general contractor. Shockoe Slip firm Commonwealth Architects designed the project, and Drucker & Falk Real Estate, based in Newport News with an office in Richmond, will provide day-to-day management of the property.

A video camera on Kensington Place has been capturing the work over the past several months. A continually updated time-lapse video can be viewed on the Carytown Crossing website.

Started by Oliver’s grandfather in Massachusetts, Oliver Properties moved to Richmond in 1984, when it purchased the neighboring Kensington Place. A multimillion-dollar renovation of that property’s grounds and exteriors is currently underway.

“We don’t typically do ground-up on this scale. But I like it,” he said. “We’ll probably be doing more like this. It’s been good to cut our teeth on.”

I had the pleasure of befriending Bob and Lynn Oliver in grad school at UVA back in ’75. I think we all met at Graduate Happy Hour, and theirs has been one of the better stories to emerge from those beer fests. Justin has stepped right into their shoes and grown the company. They have a reputation for superb management. Now, with Spyrock next door turning the Galley Midtown back into a neighborhood asset, the MDA is a much better place to live.