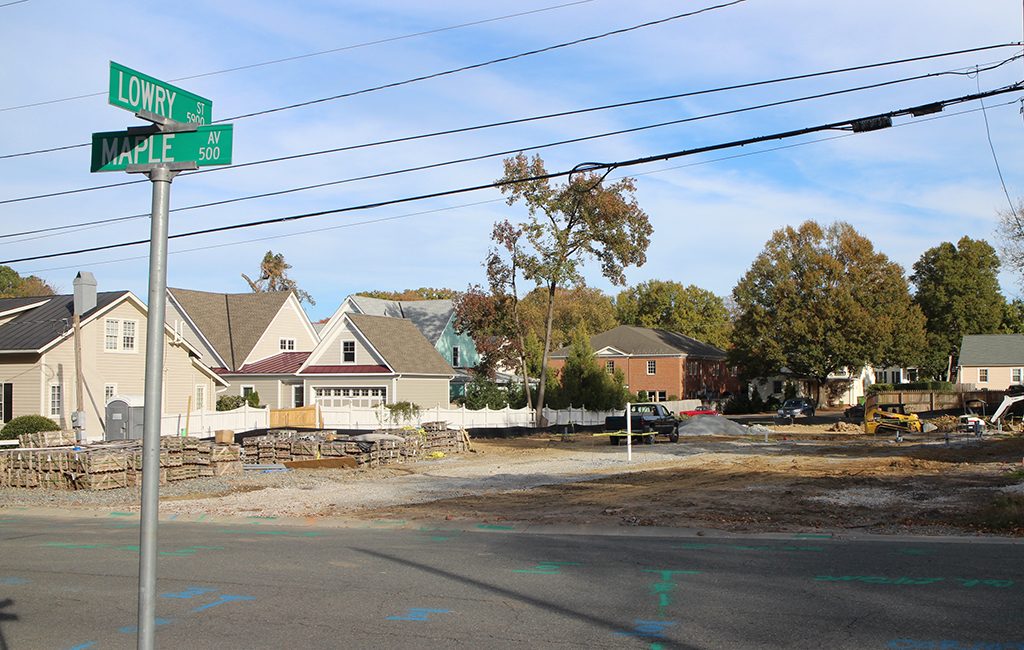 A view of the construction from Maple Avenue. (Jonathan Spiers)

On the same block as a stalled, high-profile condo project, a less visible and smaller residential development is getting underway in Richmond’s West End.

Site work has started on a project called Maplewood, a cluster of four single-family homes on two cleared lots at 501 and 503 Maple Ave., around the corner from The Tiber condo development at Libbie and Guthrie avenues.

The homes are being developed by Edward Hettrick, John Vinis and Claude Whitehead III, who purchased the two lots totaling about a half-acre earlier this year through an entity called Tri-American Properties LLC.

Vinis said the properties came to their attention via his wife, who was friends with one of the previous owners. When the friend was selling that property, the team made an offer on the property beside it. Two rental homes on the lots have since been demolished.

Vinis said they have flipped several houses throughout the city and had been eyeing the Libbie and Grove area for years. Hettrick resides in the area, he said, and Whitehead’s law office is adjacent to the property along Libbie Avenue.

“We’d always been really attracted to this area and always batted around the idea that if we could get a hold of some property, we could really do some neat things,” said Vinis, a general contractor by trade. “There’s such a shortage of property. It’s so hot over there right now. 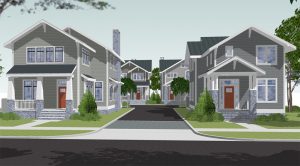 A rendering of the planned development near Libbie and Grove. (Courtesy Edward Hettrick)

“We worked very closely with the city planning department to put together a project that the city would feel really comfortable with and meet their goals of urban infill,” Vinis said. “We’ve actually been told that the plans we have are a model for what the city would like to see going forward.”

Each of the homes will total about 2,800 square feet and include a detached garage with an upstairs room that Vinis said could be used as a guest cottage or yoga studio. The three-bedroom homes will share a driveway off Maple, with the garages located between two unit pairs.

The homes will include conditioned crawl spaces, aluminum-clad windows and stone foundations and chimneys. Vinis said the stone was purchased at a reduced price from Luck Stone, which recently sold off its retail operations.

He said two of the homes are already under contract – one to a resident of the adjacent Maple Green subdivision who wanted more space; the other to a buyer who came from The Tiber, a long-stalled project that recently got out of bankruptcy through a sale that included payment of $1.8 million to condo purchasers.

The homes are being designed by Michael C. Brown, a Staunton-based architect. The developers are also working with Chesterfield-based Townes Site Engineering.

Vinis would not say how much it will cost to develop Maplewood. He said the two pre-sold units would be finished by April or May, and they’re deciding whether to build the other two as spec homes or at the time of sale.