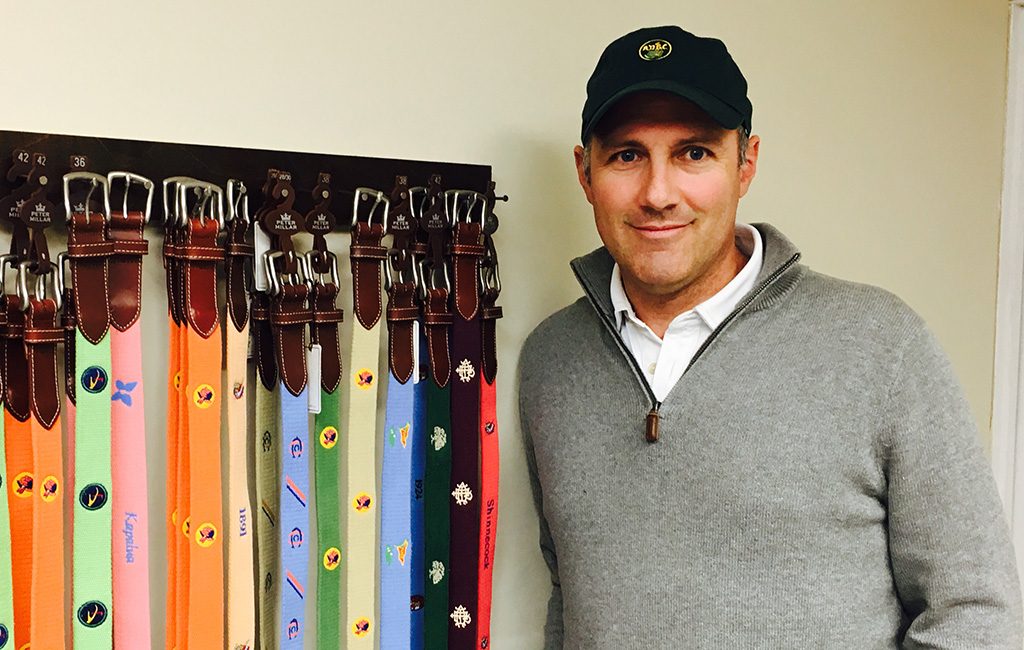 Steve Dewalle with a selection of J.T. Spencer belts.

It all started with Steve Dewalle’s quest to play the top 100 golf courses in the United States.

The Richmonder kept a blog of his endeavor, telling stories from the fairway and reviewing each course. He built enough of a following and connections with course operators that a belt company seeking more golfers as customers approached him.

The company was called J.T. Spencer, and it was founded by its namesake in New York in 2011, determined to make a quality, American-made belt at a reasonable price.

Three years later, Dewalle said J.T. Spencer had become too much for its founder to handle alone, and in May 2014, Dewalle and his business partner Spens Woodruff bought the company, and moved it from New York to Richmond.

“It was a really easy transition because I was friends with J.T. It was growing too fast, and it was a hobby for him, a side project,” said Dewalle.

Its belts now are sold in more than 500 golf pro shops across North America, Europe and Africa, including locally at Kinloch Golf Club and The Country Club of Virginia.

In July 2015, the company moved into a 1,000-square-foot space on West Broad Street, which initially served just as office space. In the last year it tripled its space, and this month expanded once again in the same building to accommodate growth. Six employees now work there, handling some of the belt production, packing and shipping.

“The reason we brought that stuff in-house is because we just couldn’t find people to do it,” Dewalle said. “It’s very labor-intensive to get them ready for retail.”

Dewalle and Woodruff initially sold the belts out of Dewalle’s garage, but they both left their day jobs and went full time for J.T. Spencer. Dewalle had worked in publishing and Woodruff worked at Anthem for 17 and 15 years, respectively.

“Scott Mahoney, the CEO of Peter Millar, offered us an opportunity to become a licensee, which basically means they granted us permission to produce product with their label on it,” said Dewalle. “It was a big deal. Our margins tripled when they made us a licensee.”

Dewalle said there are no plans for a J.T. Spencer brick-and-mortar shop, as most of its sales come through e-commerce and wholesale.

In addition to local golf courses, J.T. Spencer-made belts are sold in Richmond at Vineyard Vines and Collared Greens. It also produces custom belts for individuals, clubs, companies and so on. J.T. Spencer belts start at $85, with the Peter Millar collection starting at $95.

For 2017, Dewalle said the company is preparing to re-launch its website and continue growing through its e-commerce store. Richmond-based web developer Taylor Pace is building the site, and they hope to have it ready sometime this month.

As for Dewalle’s quest to play the country’s top 100 golf courses, he achieved what he set out to do. His journey began in 2007 at Pinehurst No. 2 in North Carolina and ended in 2014 at Friars Head Golf Club in New York.