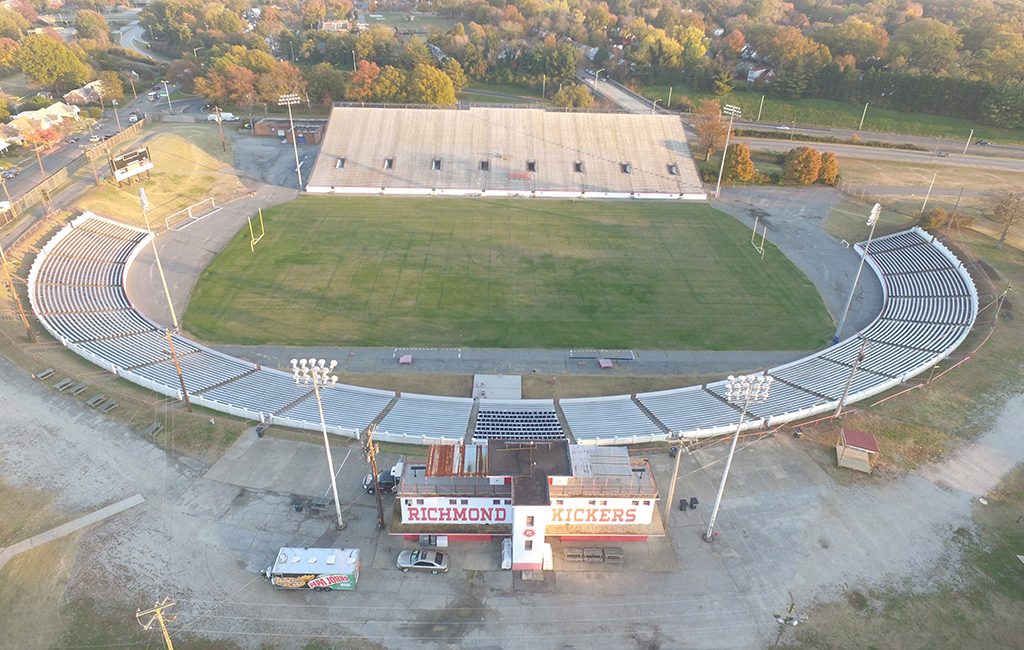 The Richmond Kickers closed out 2016 on a hot streak that’s carrying over into the new year.

With an increase in attendance in recent seasons, the team looks ready to invest $20 million in stadium upgrades.

Leigh Cowlishaw, the Kickers’ manager and director of soccer, and Rob Ukrop, president of the Kickers’ board of directors, talked to BizSense last week about the motivation behind the team’s ambitious growth plans, much of which hinges on making its longtime home a better place to watch soccer.

City Stadium has been the Kickers’ home since 1995, two years after the club’s formation. The city of Richmond owns the stadium and the soccer club has used the facility via per-game permits, but never a dedicated lease.

While it’s never seemed like the city was prepared to sell the property, the occasional rumors of interested developers struck a nerve with the Kickers.

“For all these years, the city didn’t know what they were going to do with the stadium,” said Ukrop. “We’ve just been trying to get the long-term lease,”

That uncertainty made it difficult to gauge the future.

Despite a lack of upkeep to the bones of the stadium since the University of Richmond vacated it in 2010, the Kickers were never keen on leaving.

“It has a soft spot in our hearts. It’s centrally located near Carytown, and we’ve been here for decades,” said Ukrop. “We want to give it the TLC it needs.”

That TLC will come in the form of the $20 million, three-phase renovation plan the team agreed to pay for as part of the lease.

And the organization is starting from the ground up.

The first phase includes improving the field, fencing, parking and landscaping. The latter phases would improve the concourse, stadium lighting and press box, while adding additional seating, Futsal courts and mini-fields around the area.

“The first step in breaking ground is figuring out what’s broken,” Ukrop said. “The city owns the stadium, but we want to be a good steward of the resource. We’ve been going to community meetings, talking with people about how to make the fan experience better. Since 1993, our entire organization has been built on teamwork.”

A major driver of the team’s confidence for the future is the growth of crowds at its home games in the last few years – it averaged 4,000 fans per game last season – and the growth of soccer in America overall.

“We want to build on this momentum. Last season, attendance was up 40 percent,” Cowlishaw said. “It’s great for recruitment, when players come and see what our games are like.”

“The people of Richmond are seeing the future we do,” Ukrop said. “There are lots of young people coming and becoming soccer fans. Even noticing TV ratings from the World Cup and Women’s World Cup, we notice soccer’s growing here.”

The big question remaining for the Kickers is exactly how the stadium upgrades will be paid for. The team hopes to get caught in a self-repeating process in which the stadium provides revenue that can be put back into the facility.

Stadium naming rights, signage sponsorships, and tickets are what the Kickers are banking on. The organization won’t be going to the city for money, and Ukrop said they’ve had some interest from local businesses for naming rights.

While they wouldn’t say when the work will begin or how it will be funded, the team does have some time to work it out. The first phase of stadium upgrades has a deadline of 2020, according to the lease agreement, and the second and third phases must be completed by 2030 and 2050, respectively.

The Kickers are also spurred by the momentum of its league – the USL.

“The USL is putting in systems to help everyone,” Ukrop said. “It’s a growth mindset.”

Cowlishaw said the USL is the fastest-growing soccer league in the world, based on the number of new teams forming. It currently has 30 teams.

“We want to help make the USL the best second-division league in the world,” Cowlishaw said. “It’s all about what we do in the city with the fans, and the stadium’s a part of it.”