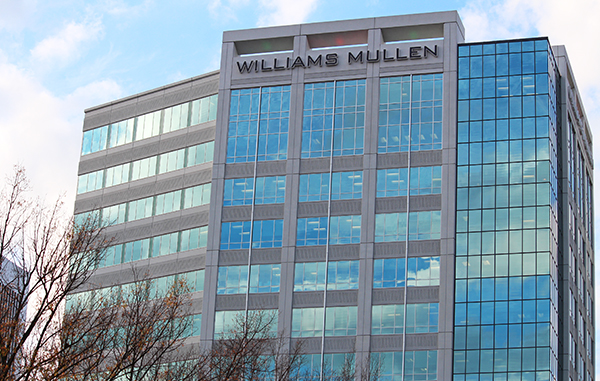 The Williams Mullen Center sold for $78 million in January.

Fresh off its most profitable year to date, a downtown legal giant is starting off 2017 with a renewed sense of confidence and some additions to its team.

The century-old Williams Mullen law firm wrapped up its latest fiscal year at the end of January, declaring it the most lucrative year in the firm’s 108-year history.

Revenue for the year reached $125.5 million, up from $116 million the previous 12 months and $109 million the year before that, according to CEO Calvin “Woody” Fowler.

Profits per equity partner are used as a performance indicator in the legal industry. The amounts are determined by dividing a firm’s net operating income by its number of equity partners for a given year.

Fowler said a reduction in expenses per attorney and overall contributed to the increase in profits. Measures taken included reductions in occupancy costs and healthcare costs and increases in efficiency of certain administrative functions, as well as in the firm’s overall number of attorneys, which reduced overhead per attorney.

“It certainly gives us confidence in the path that we’ve taken,” he said. “Some of it’s fortuitous in that our existing clients have had more legal work to give us. But we have been getting new clients, and then, in part because of the financial success of the firm and partly because of the very good culture of the firm, we’ve been able to attract some really strong, lateral hires from other firms that have brought in high levels of expertise.”

Six of those hires have been made since the start of the year, including three recent additions that came over from LeClairRyan. Scott Richter and Ben McCall were brought on to add to Williams Mullen’s corporate and community banking teams, and commercial real estate and securities attorney Alyson Harter adds to its corporate securities team, with a focus on services for investors and developers.

The firm’s downtown HQ is housed in the 15-story Williams Mullen Center at 200 S. 10th St. The building was purchased last year in a $78 million deal.

Farhad Aghdami, managing partner of Williams Mullen’s Richmond office, said its profitability and growth adds an energy and enthusiasm in the workplace that in turn draws more attorneys and clients to the firm.

“A lot of the laterals see the future that we have, a young leadership team, and our geographic presence in the places where their clients do business,” Aghdami said.  “And it’s a broad platform. We’re largely a business-focused firm, although we are a full-service firm.

“I think the success that we’ve had has built confidence, and there’s just a great vibe and a great energy in the firm,” he said. “When you walk the halls, everybody’s excited. It’s just a really fun place to be, and I think that energy is contagious.”

Aghdami also noted the firm’s civic engagements and charitable giving, consistently placing in the top 10 of BizSense’s annual Generosity Inc. rankings. The firm placed ninth in last year’s list for $589,100 in contributions to such recipients as Richmond 2015, the Virginia Business Higher Education Council and the Greater Richmond Partnerhsip.

“One of the things we’re really proud of is the engagement our attorneys have in the community,” Aghdami said. “The ethos of Williams Mullen is you have to be more than a lawyer. We live in this community, and it’s important to be engaged. And that also yields opportunities, because we develop relationships and we’ve got our ear to the ground.”

Looking ahead, Fowler said the firm will continue building on the momentum it has gained in recent years. He said it doesn’t have a target in terms of profits or number of offices or attorneys, but he said the firm does not intend to rest on its laurels.

“We are very happy with how we’ve done the last couple years, but we certainly are not satisfied,” Fowler said. “We believe that we still have a lot more potential, and we are still actively looking to grow our practices and add good attorneys, whether that be coming out of law schools or coming from other law firms.

“We think this is a great platform and a great place to work, and we have every intention of continuing to grow as a firm.”