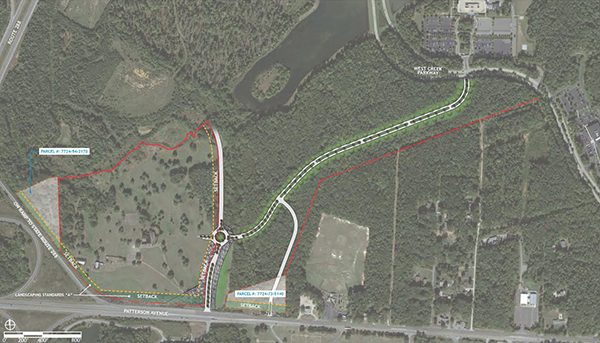 A map distributed at recent meetings shows a planned connector road between West Creek Parkway and the planned project site at the Patterson Avenue-Route 288 interchange.

After taking a step back to clarify its plans, the developer behind a proposed retail center at West Creek Business Park is moving ahead with an endorsement from the Goochland County Planning Commission.

The Pruitt Cos., which owns and operates West Creek with Bill Goodwin’s Riverstone Group, received the commission’s support last week for its proposed mixed-use development on the site of the former Oak Hill Golf Course at the Patterson Avenue-Route 288 interchange.

The move comes two months after the developer requested to defer its requests for a zoning change, ordinance update and proffer amendment that are needed for the project. The additional time allowed the company to hold a second community meeting to address questions that arose in a two-hour-long public hearing in January.

Principal Thomas Pruitt said a concern at those meetings was that the changes could allow retail uses on other West Creek parcels fronting Patterson Avenue farther east. He said clarifications were made to differentiate the project from those other parcels at West Creek’s Patterson entrance.

“The way it read, it could have (applied to) other parcels along Patterson that West Creek owns, but we were really only focused on these 150 acres,” Pruitt said. “It’s no real change – just specifying the exact locations.”

The Pruitts look to develop a mix of retail and multifamily residential uses on more than 50 acres. The changes would apply to an additional 100 acres between the project site and West Creek Parkway, north of the Patterson Golf & Sports Park and Huguenot Hills subdivision.

The changes also would add two parcels totaling 7.6 acres to the business park and rezone them, which would include up to 150,000 square feet of retail space and a multifamily component. Pruitt said the dwelling type has yet to be determined.

“We don’t know right now. I wish we had definitive plans,” he said. “What we’re trying to do is get it ready to do something with.”

The development would be anchored by a grocery store with some strip retail and outparcels for additional shops and restaurants.

County supervisors are slated to decide on the proposal at their April 18 meeting. Preston Lloyd with Williams Mullen is representing the developer in its requests, which are being made through its PWC Properties LLC.

It’s a great use for that interchange. I don’t think the Pruitt’s are doing this as an exercise though. This rezoning will increase their taxes. They plan and they develop. There’s no moss growing in their office.