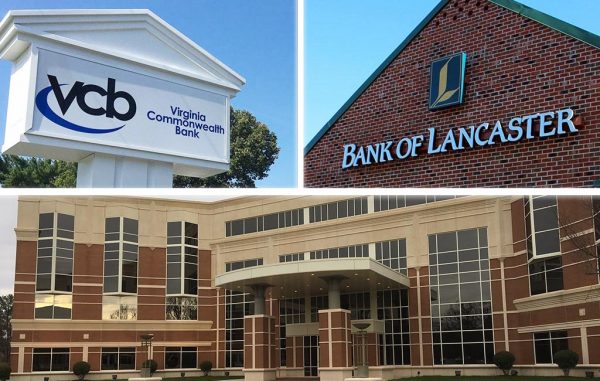 Virginia Commonwealth Bank, soon to merge with Bank of Lancaster, signed a lease at 1801 Bayberry Court in the West End.

With their marriage set for April Fool’s Day, two banks from Petersburg and Kilmarnock have found a place to settle down together in Richmond.

Virginia Commonwealth Bank, which will merge in April with Bank of Lancaster, signed a lease earlier this month for nearly 12,000 square feet at 1801 Bayberry Court in the West End.

The space will serve as headquarters for the banks upon closure of their deal, which will create a combined $800 million bank with 19 branches, all operating under the VCB brand.

VCB CEO Frank Scott and Bank of Lancaster chief executive Randy Greene, both of whom will stay after the merger, said they looked all over the Richmond area for a new headquarters, including downtown and Innsbrook.

Greene said choosing the Bayberry Court building “had a lot to do with accessibility to all parts of Richmond. That was the most central location.”

The company will move into the building in two phases, beginning in May into 4,600 square feet. It expects to occupy the rest of the space by August, and eventually have 45-50 employees there over the next year.

The first-floor space will serve as the company’s corporate headquarters, in addition to taking deposits, though it’s not expected to be a high-volume branch.

Bank of Lancaster’s headquarters in the Northern Neck will continue to operate as a branch, Greene said.

Scott said VCB’s main office at 1965 Wakefield St. eventually will be put on the market.

Brokers Trib Sutton and Scott Durham from CBRE represented VCB in its lease.

The merger has a clear path to close on April 1, following votes of approval last week by shareholders of both banks.