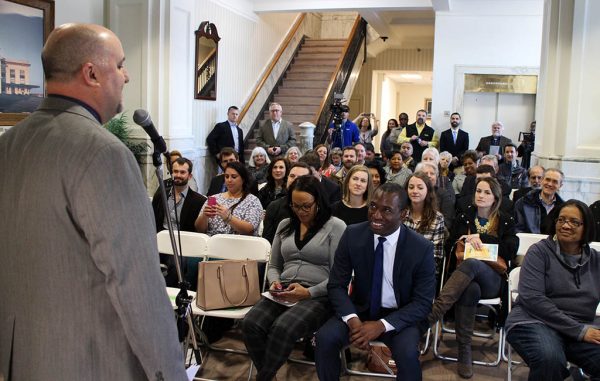 A nearly century-old building that’s spent the past two decades as senior apartments has been brought into the 21st century with a $5 million upgrade.

City officials and firms involved in the 18-month renovation of the William Byrd building, the 11-story former hotel across West Broad Street from the Science Museum of Virginia, celebrated the project’s completion with a ribbon-cutting ceremony in the lobby Wednesday morning.

Also on hand were representatives with Viridiant, a Richmond-based nonprofit that consulted on the project to achieve EarthCraft certification for eco-friendly construction and other green building techniques, and Chesterfield-based Epoch Properties, which manages the building. 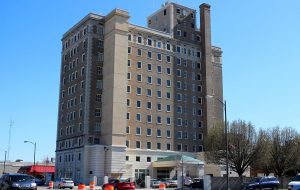 Work focused on improving energy efficiency and accessibility for the 100-plus apartments. Three units were removed as part of the project, which sectioned off a portion of the fourth floor to meet standards through the federal Americans with Disabilities Act.

Units were fully sealed to improve energy efficiency, and each now features an ADA-compliant toilet, new faucets, windows, blinds, carpet, paint and baseboards. Kitchens also were renovated with new appliances, countertops and LED lighting. Residents were moved from floor to floor during the renovation to accommodate the work.

Upgrades also were made to the building’s heating and cooling systems. Improvements included new boilers, new motors that improved the speed of the building’s two elevators and a new front entrance.

The project also included a touch up of the original hotel sign, displayed above and beside the main entrance.

Project Homes Executive Director Lee Householder said the project came in on time and on budget. He said the change in general contractors in the midst of the project was due to an increased cost estimate from Community Housing Partners, prompting the project to be bid out and won by Clancy & Theys, which did the initial 1996 renovation.

“It turned out to be a good thing because they knew the building,” he said. 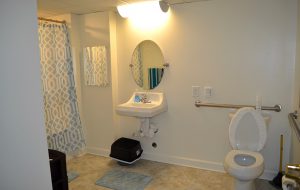 Epoch Properties’ Tony Thornton, the building’s maintenance superintendent for 19 years, said the renovations will improve residents’ quality of life while also making his own day-to-day easier.

“It’s a relief that everything’s new and updated. It makes my job easier, and the residents seem to be very happy with the improvements,” Thornton said. “It was definitely needed. And for the amount of work they had to do and the timeline, it went fairly smoothly.”

Thornton said the building is 100 percent leased and has a waiting list.

Built in 1925, the building originally contained nearly 200 hotel rooms that primarily served passengers arriving at Broad Street Station, now the science museum. The building is listed on the Virginia Landmarks Register and the National Register of Historic Places.

The renovation, which involved historic tax credits, was funded through several sources, including a grant from the City of Richmond Affordable Housing Trust Fund. Financing was provided by the VHDA, Virginia Community Capital and Virginia Community Development Corp.