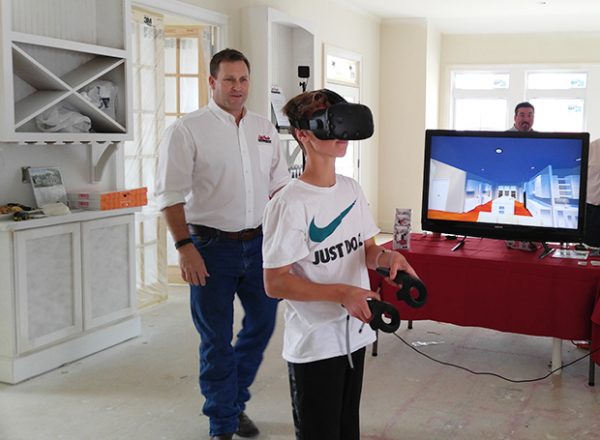 While 3D modeling and online virtual tours have become more commonplace in the home design industry, at least one local builder is taking the custom home building and buying process into a new dimension.

At a recent preview event for this year’s Homearama, an annual home design showcase to be held this May at Chesterfield County’s NewMarket Estates, Midlothian-based Lifestyle Home Builders let attendees virtually walk through and look around a completed version of the house it is building – while standing within the same unfinished home under construction.

Participants were invited to wear virtual reality (VR) headsets for a full immersion, 360-degree experience, or they could navigate the finished product via a virtual tour on a computer screen. LifeStyle is using the technology, which it adapted from building information modeling (BIM) and off-the-shelf software, to allow homebuyers a chance to see their custom home before it is built and make any changes prior to construction starting.

LifeStyle president Kevin McNulty said the technology has enhanced the firm’s design process and marketing efforts since it developed its platform over the past two years. Where other local builders and designers have been using 3D modeling and online virtual tours for model homes and stock floorplans, McNulty said LifeStyle’s platform is the first that he knows of in the local market in which customers can view their own custom design.

“Statistically, the majority of the population just cannot visualize three dimensions off of two-dimensional drawings,” McNulty said. “This gives them the ability to begin to see that home in a three-dimensional format and space and understand the spatial relationship between rooms, the flow of the home, in a way that they could never do off of drawn floorplans,” he said. 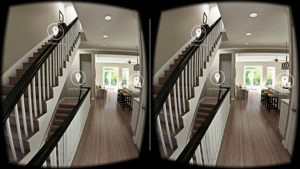 A glimpse of what users see with Eagle’s VR system.

“The big advantage of that is it allows us to deal with any adjustments they want to make at the planning stage, instead of while the home is under construction, which reduces cost, errors and frustration for the homebuyer.”

McNulty said LifeStyle has been using the technology with individual homebuyers for about a year. He said response to the program from clients and fellow builders has thus far been strong.

“The reception has been phenomenal, because one of the biggest objections that most people have about building a new home is: I have to be able to visualize the home, and if I can’t see it, I don’t want to go down the road of new construction,” he said. “With this, we’re able to show them: this is what your home looks like.”

LifeStyle isn’t alone in incorporating VR and 3D technologies in its design and marketing efforts. Glen Allen-based Eagle Construction of Virginia has been using both to presell its townhomes under construction at GreenGate, the 75-acre mixed-use development in Short Pump. The company had its own setup with VR headsets at last year’s RealtorFest and VCU Real Estate Trends Conference.

Where LifeStyle is customizing its walk-throughs per home, Eagle’s virtual tours – called “Eagle Vision,” developed with VR firm BDX – is specific to the model it is building at GreenGate, said Eagle Executive Vice President Josh Goldschmidt.

“We have little cardboard box viewers we gave out to prospects so that they could virtually walk through the model that is going to actually be our model at GreenGate,” he said. “When you couldn’t walk it, this was a way to demonstrate it.”

Despite not having its model open yet, Goldschmidt said Eagle has presold 20 of the 230 homes it plans to build at GreenGate.

“I can’t tell you that virtual reality is the reason that happened by any means,” Goldschmidt said. “But what it did was it gave us the ability to give people some of the features and understanding. 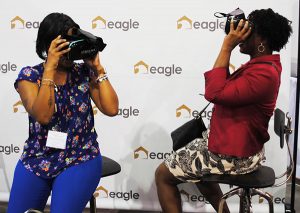 “It’s cutting-edge technology for homebuilding,” he said, “understanding that the homebuilding industry does not live at the cutting edge of technology.”

And it’s not only homebuilders using the technology locally. Innsbrook-based commercial builder DPR Construction has been using VR and BIM technologies since 2014, when it first designed a virtual mockup of an 85,000-square-foot renovation project for VCU Health.

“We did physical mockups, but we also did mockups with the virtual reality so the doctors and nurses could put on their goggles and look through what the space would look like before it was built,” said Lisa Lingerfelt, DPR’s regional head.

She said such mockups have become an integral part of the firm’s projects.

“We pretty much do it on all our jobs now. The virtual reality piece is usually our more technical or complicated jobs,” Lingerfelt said.

McNulty said some users take to the technology quicker than others, particularly those not yet old enough to purchase a home.

“When the younger generation put those glasses on, they adapt immediately and know exactly what to do and how to navigate through the home using this technology,” McNulty said. “We don’t even need to tell them, because they’re so used to other things that they do in that space, playing video games or whatever.

“The older population, we need to talk them through how to actually navigate it,” he said. “It’s funny to watch the difference.”