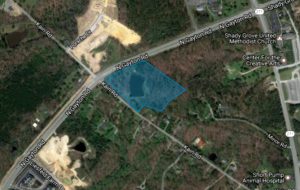 Home construction was approved for a 3.5-acre parcel at North Gayton and Kain roads.

A new section of a housing development and a solar energy facility in Henrico were given the green light by the county’s Board of Supervisors this week.

Welford Properties won approval from supervisors Tuesday to add up to 10 detached homes on a 3.5-acre parcel along the south corner of North Gayton and Kain roads. It would be integrated with the company’s planned subdivision, Leakes Mill, the land for which was rezoned in 2016.

A total of 35 units would be built in the development, which sits near the larger Bacova community that’s also in development.

The 3.5-acre parcel was approved unanimously for rezoning, with the conditions that the development would include a northbound expansion to North Gayton Road and a 4-foot sidewalk. The parcel previously was zoned for agricultural use.

Andrew Browning of engineering firm Youngblood, Tyler & Associates, which is representing Welford, said the developers hope to have properties for sale by the end of this year or early next year. Welford is led by Lawrence Liesfield.

Other issues before the board were a proposed solar-powered electricity generation plant in a tract of unused land along the south end of Meadow Road, and an approved request to revamp Henrico schools’ athletic fields.

The solar farm, proposed by Briel Farm Solar LLC, tied to Urban Grid Solar Projects LLC, is proposed for 93 acres of a 230-acre parcel and would include 71,000 solar panels. The panels would be constructed over six months.

Director of Planning Joe Emerson and other board members agreed that the solar farm would be a suitable “interim use” of the land, and confirmed with applicant Roger Bowers that the panels and poles could be removed if a better use for the land arose.

The panels have a 30- to 35-year life span, Emerson said, and the county “hopefully will have a better use for the property by that time,” he said.

Design work will begin by the end of 2017, at a fee of $974,000. The nine schools’ fields will be replaced over three years. The first three schools to convert to turf are Douglas S. Freeman, Hermitage, and Varina High Schools.

The solar farms are becoming quite an industry in themselves. If we can get some advanced technology in batteries, this could be the answer to our future needs for energy production, making use of the greatest source of energy in the universe.