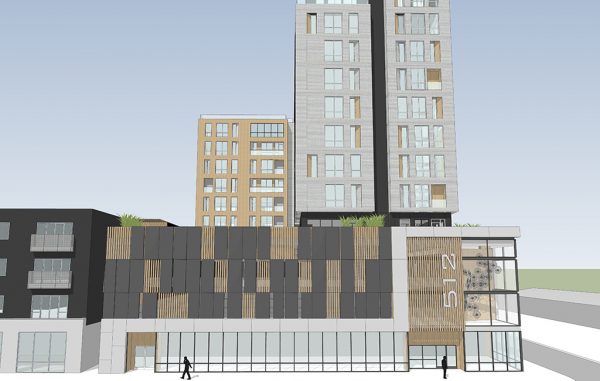 A rendering of the planned 12-story apartment complex at 512 Hull St. (SMBW Architects)

Another set of developers is looking to add more height to the Manchester skyline.

Sam McDonald and Mark Scordo are seeking city approval to build a 12-story apartment tower on a 0.6-acre parcel near the corner of Sixth and Hull streets at 512 Hull St.

The 188-unit project would be the second phase of Port RVA, the first part of which is a neighboring 102-unit apartment building at 500 Hull St. developed in 2014 by McDonald’s Property Results. The company purchased both parcels five years ago.

“The plan all along was to do two projects,” McDonald said. “We just didn’t know how the timing would turn out to move forward with the next phase.”

McDonald and Scordo have city approval to build a five-story building on the 512 Hull St. site. But because they look to more than double that height, they must seek a special use permit for the project.

Plans for the tower could reach City Council by fall, McDonald said. If granted approval, construction on the estimated $25 million project could begin by the first quarter 2018. His firm hopes to begin leasing the development to future residents by spring 2019.

McDonald said he is in talks with several lenders for financing.

Richmond-based SMBW Architects was retained as the project’s architect, McDonald said. He added the firm is looking to retain Purcell Construction as the general contractor.

512 Hull Street would bring Richmond one of its first tastes of micro-apartments, which McDonald said will include studio units ranging from 400 to 500 square feet. One-bedroom units would range from 500 to 600 square feet.

Monthly rents would range from $895 for a studio to $1,195 for a one-bedroom unit, McDonald said.

About 215 parking spaces will be installed on three levels of garage parking, Scordo said, to be used by Port RVA residents via Sixth Street. Port RVA’s existing ground-level parking, accessible from Fifth Street, will not be affected by construction.

Amenities will include a gym and dog park above the parking deck. A rooftop lounge with city views on the 10th floor of the building closest to Decatur Street is also planned.

The development will have a pool that can be used by residents of both Port RVA and the new tower via a pedestrian bridge connecting the two buildings, Scordo said.

“It will be private access for residents and their guests to use, unlike what we have now,” Scordo said. “We think it’s going to be a great amenity for tenants of both buildings.”

“We would look to break up some of the commercial space into smaller units depending on demand,” McDonald said.

Given Manchester’s residential momentum, McDonald and Scordo said the timing was right to move forward with the project.

The Port RVA apartments are fully occupied, and the new project would add to a flurry of new apartment development in the Southside neighborhood.

A few blocks over at 505 Porter St., cranes are up for Guy Blundon and Mark Purcell’s 10-story, $40 million Reynolds South apartment tower that will add 213 one- and two-bedroom apartments to the neighborhood.

Thalhimer Realty Partners also is looking to ready other components of City View Landing, including about 37,000 square feet of retail space on 2.8 acres between Bainbridge and Hull streets. The section will include 135 apartments above the retail, most of which will front Hull Street.

“We’ve been investing in the neighborhood for a long time,” McDonald said. “We’re huge believers in Manchester – this, to us, is not a gamble. These apartments are a good fit for the market.”

Demographers claim that Richmond is nearly 20,000 residential units short of demand at this point. Height is the only way we meet this demand. I attended the Manchester Business Association meeting last week and heard McDonald’s presentation on the planned tower. The picture above doesn’t do it justice; its much nicer from a more distant perspective, showing off the 5th floor amenity package and 8th floor observation deck.