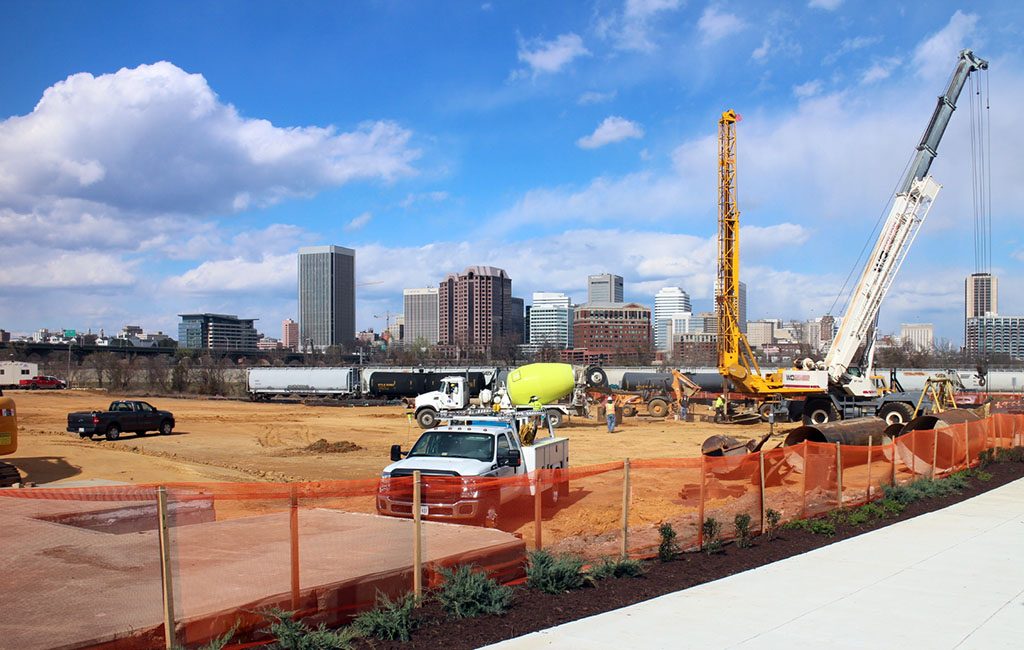 A pair of developers behind some of Manchester’s largest apartment communities is teaming up for one of their biggest – and tallest – projects in the neighborhood.

Guy Blundon and Mark Purcell have purchased the site for a planned residential tower in the 17-acre City View Landing development and are joining forces to build a nearly $40 million, 10-story structure totaling 213 one- and two-bedroom apartments.

Blundon, owner of CMB Development, and Purcell, owner of Purcell Construction, purchased the 1.8-acre site at 505 Porter St. from CBD Development LLC – an entity of Thalhimer Realty Partners, which is redeveloping the former Reynolds South property.

The deal closed Feb. 23 for an undisclosed amount, according to Thalhimer Vice President Matthew Raggi. The transaction had not been recorded with the city as of Friday afternoon.

The property is assessed at $1.2 million, according to city tax records.

Blundon said the new building, provisionally called Reynolds South Tower, will be spun off from the overall City View Landing development, though he said they will be coordinating with Thalhimer as the rest of City View takes shape.

Plans for City View Landing originally called for two 13-story towers, in addition to new retail construction and three historic rehabs. Drew Wiltshire, Thalhimer Realty Partners president, said it may be another five years before the other tower – still planned for 13 stories and 250,000 square feet of office space – would rise next door.

Wiltshire said Thalhimer has no plans to sell off any remaining parcels in the development. 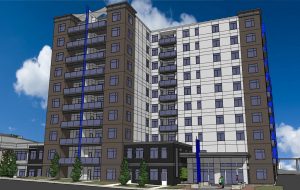 “Given the experience Purcell and Blundon have, it just made sense for us to sell them the land to develop this type of project,” Wiltshire said.

The site is bordered by West Sixth Street to the south and the railroad tracks and floodwall along the James River to the north. It is across Porter Street from Thalhimer’s City View Lofts apartment development.

Purcell Construction is serving as general contractor and launched construction on the property shortly after the purchase closed last week. Richmond-based APEX Design Group is the architect on the project.

Crews are looking to deliver the tower by May 2018. Blundon said Thalhimer will manage and lease the property.

No retail is planned, but Blundon said the tower will offer amenities such as a “sky lounge” roof deck with outdoor grills and seating, a pool, storage, fitness center and a package concierge for residents.

Each unit will include granite countertops, stainless steel appliances and wood floors and feature varying views of Manchester, downtown or the river, Blundon said.

Union Bank is set to finance the bulk of the project. Blundon said any additional costs not covered by the bank will be split between Blundon’s CMB Development and Purcell Construction.

Blundon said the timing is right for the tower given momentum in the neighborhood.

“Activity and interest in the area has been quite steady,” Blundon said. “You’re seeing demand increase in the neighborhood because of its location.”

The tower adds to a growing list of multifamily developments the two developers have completed in the area, albeit separately. The Reynolds South Tower project is their first local collaboration.

Purcell partnered with developers Robin Miller and Dan Gecker on the Terraces at Manchester – a 10-story apartment building at 800 Semmes Ave. The same group also developed 1200 Semmes, a 129-unit development on Semmes Avenue.

Blundon’s CMB Development was involved in the Link at Manchester, a five-story apartment building at 901 McDonough St., in a partnership with Dominion Realty Partners and Charlotte-based Grubb Partners.

Blundon’s other projects have included the Victory Lofts apartments in Oregon Hill and the 320-unit The Park at Salisbury at Midlothian Turnpike and Route 288. He also is planning a 238-unit apartment complex beside Blackwood Development’s planned Winterfield Crossing project in Midlothian.

Meanwhile, in anticipation of the residents Reynolds South Tower will accommodate, Wiltshire said Thalhimer is readying other components of City View Landing, including about 37,000 square feet of retail space on 2.8 acres between Bainbridge and Hull streets. The section will also include 135 apartments to be built above the retail, most of which will front Hull Street.

That portion of City View Landing is estimated to cost about $20 million to $25 million, Wiltshire said. He said a general contractor has not been selected for the mixed-use project, which the company aims to begin this year.

The firm is also recruiting a grocery store to fill a 35,000-square-foot space that will occupy an additional 2 acres at 423 Hull St., on the retail side of City View Landing. Wiltshire did not say which store is in talks to fill the space.

Thalhimer’s Raggi said many of the key pieces of City View Landing are coming together. He said City View Lofts – a 219-unit apartment complex at 411 Bainbridge St. – is about 85 percent occupied, while 20,000 square feet of office space in the building is 100 percent leased.

While he said momentum is in place to move forward with the mixed-use section between Bainbridge and Hull, Raggi said further demand for office space has yet to cross the river to Manchester. Wiltshire said it may be another five years before the 13-story, 250,000-square-foot office tower planned next to Reynolds South Tower would be constructed.

“For us to even start construction on the building, we would need to have about 150,000 (square feet) committed to the space,” Wiltshire said. “We’re just not seeing the interest at the moment.”

Purcell and Blundon make up an excellent team, one for his construction knowledge, the other for his financial acumen. And they are both good guys by any ones definition. They have the best location in Manchester and they’ll enjoy the best views of the city possible. This project will be a raging success.

Yea! And good for you to let a junior high kid with an open source version of sketch-up design the tower for you. Next time you might want to hire an architect with some talent and artistic vision, one that would design a building that could surpass the beauty of the site

You expect more from the latest batch of Richmond fleecers?

Thanks Kelly and this should be required reading for all Richmond apartment developers to inspire them to exceed expectations…https://www.fastcodesign.com/3068764/10-of-the-worlds-coolest-apartment-buildings

Let’s talk about this…..

It’s telling that the designer was not even mentioned in the article, or gotten enthused recognition in the comments. Architecture should tell a story, the context, massing and details are the vocabulary spoken to tell that story. What does this ten story tower say to the City of Richmond and to the beautiful James River that it faces?

Thank You Kelly for bringing this issue up. Richmond is at the point where we can start asking more from infill developers other than “Please make your project not stand out from the historic fabric — ugly is okay, “good enough” is ideal.” Places like Richmond suffer from a sense that the architecture of a place should be in a particular era, much like Europe, but with the added handicap of being just fine with mediocrity (or often sub-par) design like many Midwestern places recently (not all! And it is sad to see once ambitious Midwestern cities that built great… Read more »

I think Blundon and Purcell are missing a real opportunity by not planning for retail in this new project. As a resident of the area, I enjoy Manchester but the biggest single drawback is that the area is a bit of a food “desert” without real grocery options. The ground floor of the new building would seem like an obvious choice for a small grocery store to serve the residents of Manchester, and increase the desirability of the neighborhood, making it a walkable destination instead of having to drive to Carytown or Forest Hill.

It really is an ugly building. Disappointing.

Camden’s Dogtown market sells many grocery items, while not a full grocery store.

A large scale grocery store, located two blocks over, is part of the development plans. Given the limitations of the train-yard and elevation changes, the apartment and office towers are in a bit of a cul-de-sac so retail may not be successful in their immediate block.

As far as the design, I just really hope that is not the final rendering…

I saw the new rendering just yesterday. The view shown on BizSense was a side view, not what one will see from downtown Richmond. Consequently, it wasn’t a good representation. The final rendering is an even better looking Terraces of Manchester. Huge balconies and terraces will overlook both the James and properties in Manchester. The brick chosen has a lighter, more inviting hue. You are going to like it!

This is not architecture, but on that site Architecture should be a prerequisite. Where are the visionaries in this town? Why is mediocrity acceptable to a city that wants to be world class? It is not enough to accept the lowest common denominator.