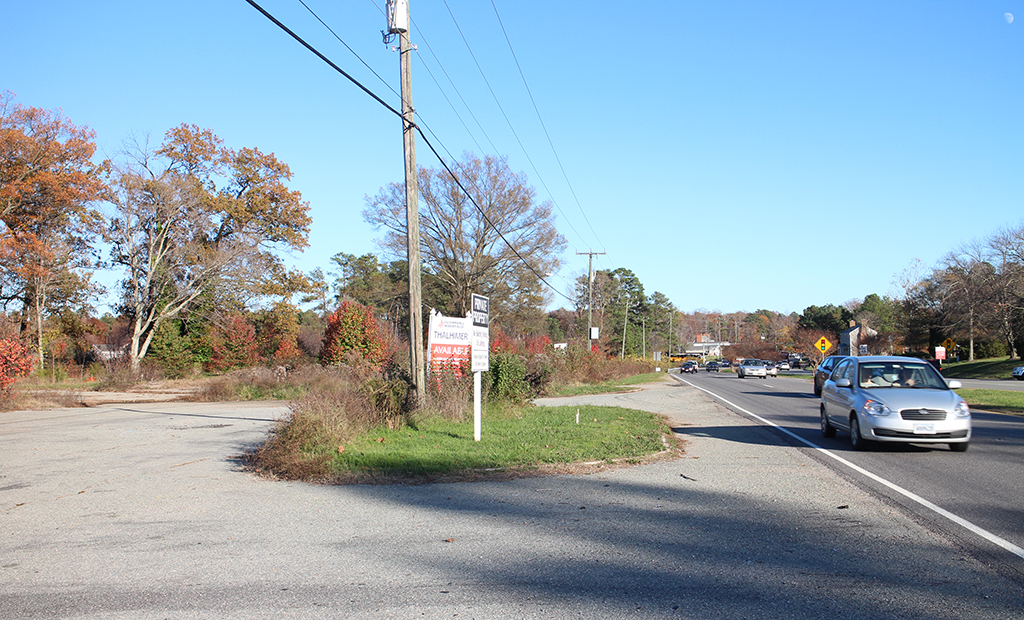 Editor’s note: This story has been updated to include comments from the developer received after deadline.

Nearly two years after the project was first proposed, a mixed-use development planned along Midlothian Turnpike has failed to find the support of the Chesterfield County Planning Commission.

The commission voted unanimously at its meeting Tuesday night to recommend denial for Blackwood Development’s Winterfield Crossing project – a mix of 250 age-restricted apartments and 100,000 square feet of commercial space proposed for 25 acres along Midlothian Turnpike west of Winterfield Road.

Despite support from several speakers and the county’s planning staff, commissioners shared the concerns of county transportation staff that the proposal did not include a cap on development density, contending that the project’s full impact on roads and other infrastructure could not be known or controlled.

Midlothian District Commissioner Peppy Jones also expressed dissatisfaction with the design of some of the buildings in the project, which he described as largely unchanged from a version proposed last summer. Jones led the commission in recommending denial to the board of supervisors, which is slated to take the case up in February.

After the meeting, Blackwood’s attorney, Andy Condlin of Roth Doner Jackson Gibbons Condlin, said the density cap issue could be addressed and easily rectified before the case goes before supervisors next month.

“I feel confident we can rectify the situation with the transportation department and we will receive their support at the board of supervisors,” he said.

In a statement, Marc Greenberg, a principal with Blackwood, said the issue would be resolved and expressed optimism moving forward.

“Tonight, we heard the community’s support for this project. While we are disappointed that the planning commission went against the planning staff’s recommendation to approve the project, we understand the commission’s concern,” Greenberg said.

“This issue can easily be resolved by providing the county department of transportation a density cap, and we are confident that we can address this before the project is considered by the board of supervisors.”

The commission had endorsed an earlier version of the project in November 2015, six months after it was submitted to the county, but supervisors sent the case back to the commission last January, citing opposition and misinformation about the case in the community. 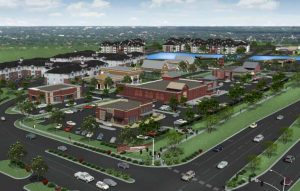 A rendering of the proposed project.

The past year has been spent revising the project’s architecture designs and site plan layout, Condlin said. He said revisions were based on feedback received from county officials and the public, and the project was reintroduced to the public at a community meeting held in December.

“That’s a big number,” Condlin said prior to Tuesday’s meeting. “I think that’s reflective of the work that we put into this project, to be able to accommodate a lot of the comments and suggestions by not just the county but the surrounding community. Our plan really does reflect a lot of what they’re looking for, which is mixed-use, village, small shops–avoid the strip shopping center.”

The development would include a mix of restaurants, office and retail space, and apartments restricted to ages 55 and up. An 8,500-square-foot retail center is planned, and an Aldi grocery store is lined up for an 18,000-square-foot building.

The Aldi building would be unlike the chain’s other stores in the area, with a brick-and-corrugated-metal façade that’s designed to look like a neighborhood market, according to renderings included with the proposal. The development overall was designed with architecture inspired by the buildings at Tredegar Iron Works, which was tied to the mines that once operated in Midlothian.

The designs were drawn up by Midlothian firm Timmons Kelley Architects. Ashland-based Perretz & Young is the project architect.

Other local firms on the project include Higgins & Gerstenmaier, which provided signage planning. Civil engineering was provided by Timmons Group and AES Consulting Engineers, the latter of which also provided land planning.

Blackwood purchased the site in 2012 for $2 million. The land is part of a 58-acre area once slated for a mixed-use project called Midlothian Town Center, which fell into foreclosure in the wake of the recession. Pieces of that land were picked up by Blackwood and fellow Midlothian-based developer Rebkee Co., which is developing the nearby Winterfield Park across the railroad tracks.

Developer Guy Blundon is planning a nearly 250-unit apartment complex on 8 acres next to the site. Blundon was among several speakers who spoke in support of the project during a related public hearing.

This is a beautiful work-live-shop-play community from a developer with a successful track record of building and managing quality projects. Blackwood deserves the community support that they are getting. I’m sure they’ll work out this cap issue with the County and advance this to construction soon. Blundon’s apartments are approved and ready to start this Spring and he’ll add a terrific new community to Midlothian.