The site of the ill-fated Midlothian Town Center project that fell victim to the recession is starting to see some activity from two local developers.

Construction is underway on Winterfield Park, a mix of townhomes and houses on 20 acres along Winterfield Road just north of Midlothian Turnpike. The development is across the railroad tracks from the site of another project, Winterfield Crossing, which received an endorsement last week from the Chesterfield Planning Commission.

The two projects are filling a void that was left by the foreclosure of Midlothian Town Center, a 58-acre mixed-use project that called for 320,000 square feet of retail and office space and residential components. That project was started by the James Doran Co., a South Carolina-based developer whose work came to a halt in 2009 in the wake of the recession.

In the years that followed, Midlothian-based developers Rebkee Co. and Blackwood Development picked up some of the pieces from that foreclosure. Rebkee is now working on Winterfield Park, and Blackwood is behind the proposed Winterfield Crossing. 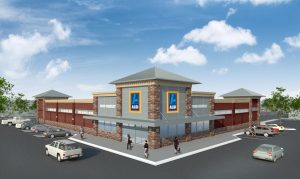 Winterfield Crossing hopes to be anchored by an Aldi grocery store. Image courtesy of Blackwood Development.

Blackwood’s project will be a mix of up to 250 age-restricted apartment units and 100,000 square feet of commercial space that requires zoning approval from county supervisors. The board is scheduled to decide on that request at its Dec. 16 meeting.

If approved, Winterfield Crossing would fill 25 acres west of Winterfield Road between Midlothian Turnpike and the railroad tracks. At the planning meeting last week, attorney Andy Condlin of Roth Doner Jackson, who is representing Blackwood, described the project as a “down-zoning” – Winterfield Crossing’s proposed commercial piece is about one-third the size of the original town center’s commercial plan.

The commercial component would include an 18,000-square-foot building that is proposed for an Aldi grocery store. The rest of the space would house other retail in a village-style setting with on-street parking and landscaped sidewalks.

Condlin described Winterfield Crossing as a $40 million investment by Blackwood.

The project is separate from an 8-acre apartment complex that would front Winterfield Road beside the railroad tracks. That project, developed by Guy Blundon of Midlothian Town Center Apartments LLC, was approved in 2009 for 246 units but has not been constructed.

Meanwhile, construction is underway on the first of 25 single-family detached houses for Rebkee’s Winterfield Park. The project, just south of the adjacent Winterfield Station and the larger Salisbury neighborhood, will also include 122 townhomes. Midlothian-based Main Street Homes is the builder on the project. 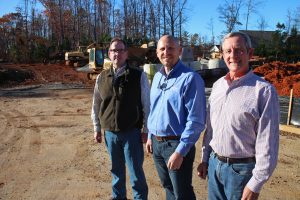 McClure said he did townhome work for other firms before starting his own company, and Winterfield Park was appealing in part because it offered a chance to return to that type of construction.

“We have not built townhomes since we started Main Street Homes in ’96,” McClure said. “This is just the perfect location for us and a good way for us to get back into townhomes, so we’re really excited about this project.”

Main Street Homes is working with Northern Virginia-based architecture firm Penney Design Group on the townhomes. The firm said the homes’ exteriors would hark back to Colonial Williamsburg and Monument Avenue-style homes, while the interiors will feature more modern designs.

While work is underway on the first section of Winterfield Park, the bulk of the community will not start construction until mid- to late summer, with build-out projected in two or three years.

A required realignment of Winterfield Road that was started by Doran was wrapped up this summer by Rebkee, Principal Rob Hargett said. Counting land acquisition and other costs, Hargett put the overall development cost of Winterfield Park at $10 million.

Hargett said he and McClure, whose companies share a building, jumped at the opportunity to work together on the project.

“We live over here, we’re located in Midlothian. So, very appealing for us, particularly given this is our back door – our neighborhood,” he said.

Where is all that TRAFFIC GOING TO GO?