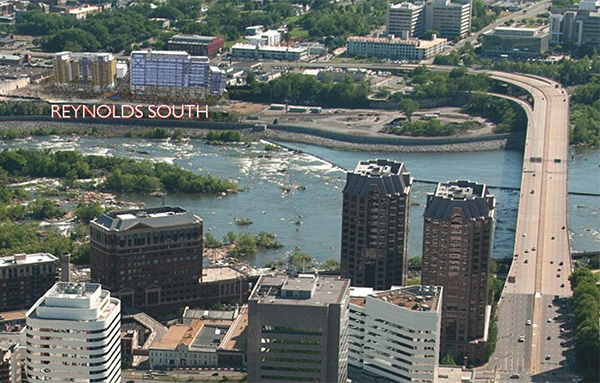 A rendering of the Reynolds South project. (Courtesy of Cushman & Wakefield | Thalhimer)

With the ink dried on a $9 million Manchester acquisition, a local real estate firm is unveiling plans for its massive Reynolds South renaissance.

Conceptual drawings show two 13-story additions to the Southside skyline, as well as a new construction retail section anchored by a 34,000-square-foot shop at Hull and Fourth streets.

That’s in addition to three historic rehab projects planned on the site, one of which is already in the demolition phase.

Thalhimer broker Jeff Cooke said the overall development could total more than $100 million in renovations and new construction at one of the city’s largest tracts that has been untouched by the downtown development drive. 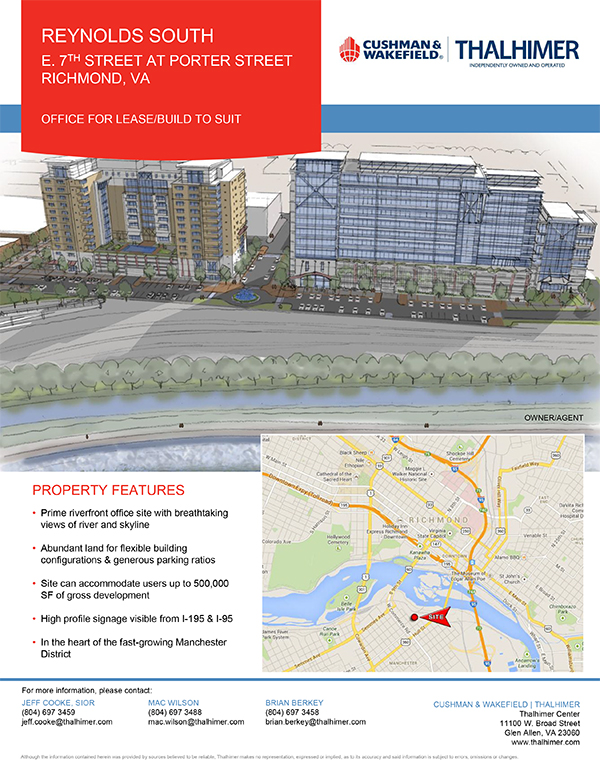 “In a city like Richmond that is mature, there are very few open pieces of land like this,” Cooke said.

Thalhimer Realty Partners, Cushman & Wakefield | Thalhimer’s acquisition and development wing, bought the dormant metals plant in December after putting it under contract at least eight months earlier. The firm paid $9.25 million for the property and announced plans for a long-anticipated mixed-use development.

Cooke, whose Reynolds South marketing and leasing domain runs northwest from Porter Street to the property’s edge, anticipates one office tower and one residential tower to be built on a concrete pad that sits between Sixth Street and the Manchester Floodwall Walk. The conceptual plan calls for each building to reach 13 stories, although Cooke said they could grow as tall as 15 stories.

The residential tower is slated for 10 floors of housing on top of three levels of parking. It will total 250 total units, adding to the 263 apartments planned for the three rehab buildings.

The office building shows four parking levels and nine floors of space on the other side of Perry Street. Cooke estimated about 250,000 square feet of space for that building.

Reynolds South Building A, the conversion project that reaches Seventh Street, will also have office space, and Cooke said he has shown the building to two potential 20,000-square-foot tenants.

On the retail end, which fronts Hull Street and is separated from the high rise site by the three rehab projects, drawings call for a 34,000-square-foot anchor at Hull and Fourth streets and two 13,000-square-foot strips.

Thalhimer Realty Partners handled the acquisition and will be paying for the construction. The brokerage arm is handling leasing, and MGT Construction, Thalhimer’s construction arm, is the site’s general contractor.

Walter Parks is the architect for the current adaptive reuse projects.

There is no firm timetable for development beyond the apartment conversions currently underway, and Thalhimer Realty Partners president Drew Wiltshire said the market will determine the order in which the pieces come together.

“The development I see playing out clearly starts with the renovation of the buildings,” he said. “But I couldn’t wager a guess on what comes next.”

Thalhimer is the latest in a long line of developers to add apartments to Manchester. There are at least 500 units under construction, with a slew of buildings completed in the past few years.

Cooke said those other developments sprouting up around Reynolds South give him confidence that Manchester’s most ambitious development plan yet will take off.

“All of this is going to happen. The proof is here,” he said. “This is no longer pioneering.”

The Legend deck is positioned at the far west end of the proposed building site. It is highly unlikely that the Legend deck view will be completely obscured. There are seven acres to work with on this site. Please keep in mind that the tower portions of buildings are generally less than an acre in size. The parking facilities under the building will be low rise. For example the new McGuire Woods building known as Gateway Plaza sits on a site that is just over an acre in size. Go out on the Legend deck and observe how much land… Read more »

We’ll miss that view of course but I suspect that Legends will be happier to have all the new customers . They may want to expand!

This is one more exciting new project for Downtown Richmond as the city continues its rebirth. A lot of private equity is pouring into RVA!

So the pioneers that have been there for years will lose their views and also lose the industrial feel Manchester has to offer. It looks like another building from Short Pump.

By “pioneers” do you mean the residents who have lived in that area for decades but don’t get a write up in Style Weekly and heralded as saviors or pioneers.

Or do you mean the hipsters/yuppies that have been there for a few years and suddenly feel somehow entitled to the views.

As a downtown resident, I’m always grateful for new development improving our neighborhood. Sadly, this is another view/public access lost to the “haves” unless they make an effort to share the riverfront with the public,providing access/greenspace. You can always view the river from a highrise…not so much from behind it. I have the same problem at parades…

This site deserves a better site plan. The land uses are separated in a suburban fashion. There should be retail and restaurant spaces on the ground floor of all of the buildings. There should not be all that surface parking. Retail in an urban setting does not mean a shopping center! This is a prime piece of real estate. The development here should be a destination for the entire region. This plan creates limited, if any street life. The street grid is not restored as dictated by the Downtown Master Plan. There should be more height, density and mixed use… Read more »