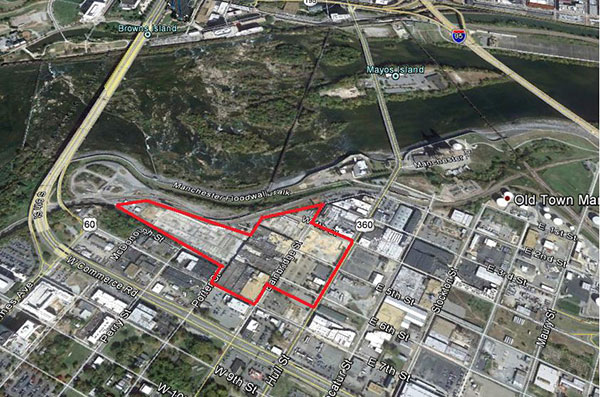 An aerial view of the former Reynolds South plant. (Via Google Earth)

Another developer wants to take a crack at the Reynolds South plant.

Thalhimer Realty Partners is under contract to purchase the 17-acre Manchester parcel that once housed part of the riverside Reynolds metals operations. 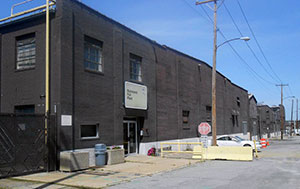 “We are in the process of assessing the viability of the the project,” he said. “Obviously, we like the location.”

The Reynolds plant, which employed about 500 people when it closed in 2009, has been eyed by developers for a mix of residential, office and retail. CBRE has the listing for owner Reynolds Group Holdings, based in New Zealand.

Rob Dirom, a broker with CBRE who represents the property, would not comment on the status of the parcel. CBRE was reportedly looking to get $9 million for the property.

The property consists of 7.5 city blocks, including about 300,000 square feet spread among three large building and several large pad sites, bordered in part by Hull, Bainbridge, Sixth and Seventh streets. Parts of it could be eligible for historic tax credits. 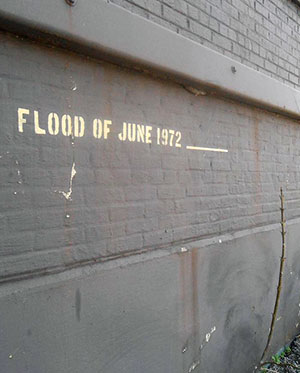 A historic detail is documented on the property.

Developer Tom Wilkinson had the property under contract for the better part of last year but struggled to line up financing. He was planning a large mixed-use project with office, retail and apartments.

Lingerfelt Companies had looked at developing an office component on one of the pad sites in conjunction with Wilkinson’s plans for the property. Ryan Lingerfelt, a principal with the developer, said his firm was not involved in a potential Thalhimer deal.

Developer Tom Papa, who has developed several properties across Manchester through his Fountainhead Properties, said the Reynolds South site is challenging because of traffic flow issues and the demand for commercial space along Hull Street. But he said he thought Thalhimer could pull it off.

“They are attached to a commercial real estate brokerage, so if there is anyone who would be able to do it, it would be them,” he said.

Just across the river, Fountainhead, in conjunction with Rocketts Landing developers WVS, is repurposing the seven-acre Reynolds North plant, now known as the Locks.

That project is being converted into 174 apartments, with the new restaurant Casa del Barco in the ground floor of the project’s centerpiece, the Italianate building.

Should a deal close on Reynolds South, the project would be the biggest development Thalhimer Realty Partners has undertaken in the city.

The firm is redeveloping the former Julian’s restaurant property on West Broad Street near Boulevard, where a wine bar and apartments are planned.

One of its larger local projects was the purchase and redevelopment of the former S&K headquarters near West Broad Village in 2010.

I walked along the floodwall yesterday and was wondering what was happening with that property. It has a beautiful view of the river and adding retail or restaurants to that are would be a great use of the property. But I do understand the constraint of the traffic flow. Hull Street is only 2 lanes and even worse is the access to I-95. road improvement need to be made to make access to Manchester from the highway more accessible.

Sure hope someone can squeeze a grocery store in there….all these apartments are wonderful but their inhabitants like to eat food.